Half a century later, Kennedy remains tied to Harvard 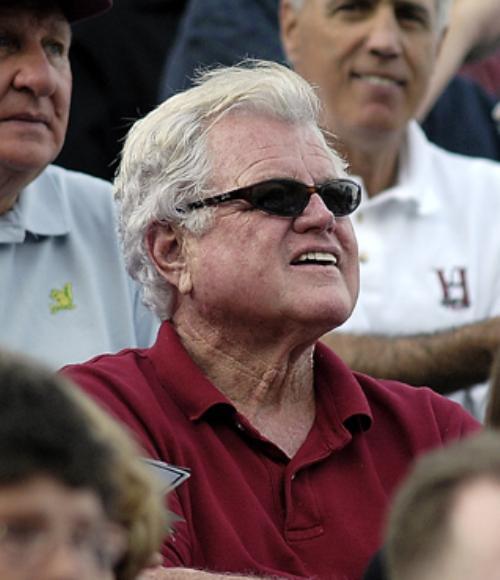 Kennedy keeps his eye on the ball at a Harvard-Dartmouth football game.
By Joshua D. Gottlieb, Crimson Staff Writer

When Sen. Edward M. Kennedy ’54-’56, D.-Mass, took Richard J. Clasby ’54 skiing in the winter of their freshman year, the future leader of the Democratic Party was in top form, keeping Clasby on his toes from the very beginning.

Though Clasby says he had never really downhill skied before, Kennedy took him above the top of the ski lift in Waterville Valley, N.H., leaving the newcomer no choice but to ski down the 2000 foot mountain.

“He thrived on the challenge,” Clasby recalls about Kennedy. “You couldn’t do hardly anything without a challenge.”

Kennedy’s thirst for adventure is hardly the only quality that suited him to a long career in politics. Jeff Coolidge ’54, who has helped Kennedy brainstorm bills in the Senate, says that the senator knows how to entertain a crowd—and, just as significantly—how to keep friends.

“He deals with all [his] friends very straight and equally,” Coolidge says. “He must have thousands of us and...he’s always there, he’s always listening, always ready to help out.”

Judging by the relative ease with which Kennedy has won seven consecutive terms in the Senate, he seems to be friends with all of Massachusetts’ six million residents. Over the course of his 42 year Senate career, Kennedy has become a prominent liberal legislator—fighting for civil rights and affordable health care—and a senior statesman in the Democratic Party. He inherited the role from his two older brothers, President John F. Kennedy ’40 and presidential candidate Robert F. Kennedy ’48, after they were both assassinated.

Though his career was threatened when he was implicated in the death of a young aide in Chappaquiddick, Mass. in 1969, Kennedy escaped with a minor conviction and was re-elected to the Senate in 1970. Over the next two decades he was perennially mentioned as a candidate for president, but has each time opted not to run.

From his freshman year onwards, football was the cornerstone of Kennedy’s life in college.

Clasby, an all-American tailback, says that freshman football—more than today’s varsity athletics—led to lasting friendships among the teammates.

“There’s a closeness to the freshman situation,” Clasby says. “That’s really where you got to know a lot of people and got to know them very well.”

Kennedy was not the only member of the 1950 freshman football team to join the Senate—John C. Culver ’54 represented Iowa for one term after serving for a decade in the House of Representatives.

Culver, fullback in the Harvard Hall of Fame, recalls Kennedy dedicated himself to football with complete disregard for his personal welfare.“In order to improve his tackling...after practice—without his pads—he would work on trying to tackle Clasby,” Culver recalls.

Clasby says Kennedy’s antics were more in play than in practice, but he remembers at least one thing about the tackling: “He always remembered when he didn’t tackle me,” Clasby says.

Before Kennedy could move up to the varsity team with his classmates came freshman year final exams.

Kennedy had been struggling in Spanish A and was not confident about the final exam in spring 1951. William A. Frate ’54 agreed to take the exam under Kennedy’s name, but was caught by the proctor. Frate and Kennedy were both asked to take a year off, and Kennedy’s father, Joseph P. Kennedy ’12, went berserk.

Kennedy biographer Adam Clymer writes that his brother John later said, “If it hadn’t been for [my father’s outburst], UUsdfjsdUnivTeddy might be just a playboy today. But my father cracked down on him at a crucial time in his life.”

With time to kill, Kennedy joined the Army in the middle of the Korean War and was stationed in Europe.

When Kennedy returned to Harvard, he became known for his impressive catches on the football field and his hard work in both athletics and academics.

Coolidge recalls Kennedy as quiet, but a “guy who could make spectacular catches.”

“We would reenact some of those catches,” Clasby says. “But I can’t throw it as far and he can’t jump as high any more.”

Paul F. Beatty ’56, who was Kennedy’s Winthrop House roommate during their junior and senior years, says that Kennedy was a dedicated student.

“He was a quick study,” Beatty says. “I don’t think he had to work as hard as some of the rest of us did.”

According to a Crimson article from March 1956, Kennedy, Beatty and William E. Crosby ’56 defeated Eliot House in an inter-House debate league, arguing effectively against a proposition that Kennedy has supported throughout his Senate career—school integration.

Though Kennedy’s dedication to football landed him in 1955 an offer of a tryout with the Green Bay Packers, the future politician ultimately decided, as his website recounts, to “go into another contact sport, politics.” His football friendships, however, have continued.

“We meet still every year at the north end, either at the Dartmouth or the Yale game the night before,” Clasby says. “I really attribute it to playing together as freshmen.”

After graduating from the University of Virginia Law School in 1959 and serving as an assistant district attorney from 1961-62, Kennedy was first elected to the Senate in 1962 to fill the two years remaining in his brother John’s term after John was elected president.

Milton S. Gwirtzman ’54, a former Crimson editorial chair, says that he and Culver went to Kennedy’s home in Hyannis Port, Mass. on the weekends during the 1962 campaign to help prepare the candidate for his speeches and debates.

There was enough free time during the weekend prep sessions for Kennedy to teach Gwirtzman how to waterski—even though, as Gwirtzman recalls, “it took about 14 times falling down.”

The first time Culver was ever on a sailboat, he recalls, Kennedy took him to a race on Nantucket in his brother John’s sailboat, Victura, which barely survived a boat yard fire this past December.

“We had stormy weather going over, just the two of us. We got over there after several hours and slept on the boat and raced the next day, all afternoon,” Culver recalls.

The plan had initially been for Kennedy’s father to tow Victura back from Nantucket after the races, but Culver says that the weather was too stormy. So he and Kennedy sailed back themselves, arriving after midnight.

“It was quite a baptismal fire for a first time sailboat experience,” Culver says.

While Kennedy was willing to take risks and challenge his friends on the field and in the water, Gwirtzman says that Kennedy does not let undue aggression interfere with politics.

At one point during the campaign, Gwirtzman recalls, he and Kennedy were driving to speak to Kennedy’s classmates in Harvard Square, which was then overpopulated with bicycles—one of which presumably belonged to one of Kennedy’s opponents, left-leaning Gurney Professor of History and Political Science H. Stuart Hughes. Gwirtzman recalls that Kennedy’s driver, Jack Crimmins, asked Kennedy to point out Hughes’s bicycle so Crimmins could “take the air out of the tires.”

Gwirtzman says that Kennedy responded that he would not support attacking bicycles—at least not when it would interfere with his message.

Kennedy beat both Hughes and his Republican opponent, George Cabot Lodge ’50, in 1962 and has since been re-elected to seven full terms.

Though football friends have become Kennedy’s Senate colleagues as well as his friends and advisors, the Class of 1954 alumni network is hardly Kennedy’s only tie to Harvard.

Since his brother John’s assassination led to the founding of the Institute of Politics (IOP) in 1966, Kennedy has been closely involved with the IOP as a member of the Senior Advisory Committee (SAC).

“It’s one of the absolute top priorities and interests of the senator,” says Culver, who now serves as SAC chair. “He comes to every meeting and is extremely well-informed about the work of the institute...and stays abreast of the activities and the students that are involved.”

Gwirtzman, also a member of the SAC, says that Kennedy’s involvement in the IOP comes not just from its history with his family but from a deep attachment to its mission.

“The extraordinary thing about his relationship with the IOP is his commitment to the program—and really one aspect of it, which is the student program,” Gwirtzman says.

—Staff writer Joshua D. Gottlieb can be reached at jdgottl@fas.harvard.edu.