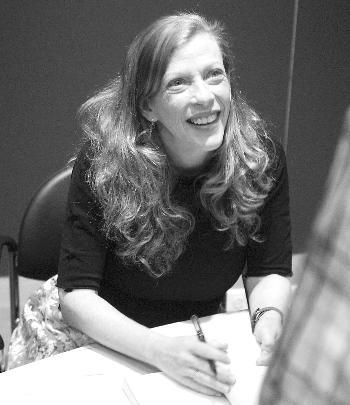 Susan Orlean signed copies of The Orchid Thief after discussing the movie Adaptation, based on the book, Monday in Boylston Hall.
By Margaret W. Ho, Crimson Staff Writer

When 2004 Nieman fellow Susan Orlean began researching the arcane world of rare-flower piracy in the mid-1990s, she was less than immediately successful, as she explained to a capacity audience of Summer School students in Boylston Hall’s Fong Auditorium on Monday.

“I’m fucked. There’s no story,” she said, recounting her thoughts as she struggled to organize an “overwhelming” amount of research.

By the time she had managed to pull that research into a New Yorker article and a book, Orlean had a critically acclaimed bestseller on her hands: 1998’s The Orchid Thief.

A few years later, Orlean’s nonfiction work was chosen as the basis of a film scripted by offbeat indie writer Charlie Kaufman and his twin brother Donald Kaufman, who may or may not exist. But when she saw the script to the film, titled Adaptation, her reaction was not surprise but something closer to horror, Orlean said.

“I’m a professional journalist,” she remembered thinking. “This is going to ruin my career.”

In the movie, a character named Susan Orlean (played by Meryl Streep) intrepidly investigates the work of eccentric orchid thief John Laroche (Chris Cooper) for a New Yorker article and a book. She also snorts psychotropic orchid extracts, brandishes—and fires—a gun and poses nude for a website while engaged in an affair with Laroche.

“It’s not my book,” Orlean said bluntly on Monday after the audience viewed Adaptation. “In an oblique way, it’s about a particular journey I took as a writer and a journalist.”

The film, mainly concerned with the trials faced by an onscreen Kaufman (played by Nicolas Cage) after he agrees to adapt Orlean’s book into a screenplay, is no kinder to its script’s author—which Orlean said led her agent to employ an unusual argument as he convinced her to approve the script.

In the end, though, Orlean said she liked the film—which netted an Academy Award for Best Supporting Actor for Cooper, as well as nominations for Cage and Streep.

“On the eighth viewing, I still enjoyed it, which is saying something,” she said, after the closing credits had rolled.

In the hour-long question and answer session which followed the screening, Orlean expressed her admiration for the shadowy Donald Kaufman, instantly naming him as the one person, dead or alive, with whom she would choose to dine given the chance.

Orlean was cagier about whether the gleeful twin—also played by Cage as a foil to the gloomy Charlie character, and credited as a writer of the film—actually exists.

“The one request [director] Spike Jonze and Charlie Kaufman made was to sort of pass on the question [of Donald’s reality],” she said. “I can say that I’ve never met Donald Kaufman, but he would have been dead anyway.”

Orlean said that the indubitably real Charlie, who has also written quirky successes including Being John Malkovich and Eternal Sunshine of the Spotless Mind, is in fact “extremely shy”—but said he was not quite the self-doubting, self-loathing and socially inept character played by Cage in Adaptation.

“He’s definitely really awkward,” Orlean said before explaining further. “He’s not quite the misfit he presents as the Charlie here. He has a healthier personal life, I’m happy to report.”

Orlean also fielded questions about Laroche, played as a gap-toothed Casanova by Cooper.

Extensive research for The Orchid Thief required her to spend a lot of time with Laroche, Orlean said, noting that while she spent around three years working on the book, their relationship remained strictly professional.

“He’s a really annoying person...he’s somebody I would never know except as a writer,” she said. “He’s a good guy, not a bad guy. He’s a complete kook.”

As has been the case for most of her work, Orlean said she overreported for the book. She specifically described time spent in Everglade City, a “poor fishing town in South Florida” where unpatrolled ports made the city especially conducive to drug-smuggling.

Every adult male person in the town got involved with drug trade, she said, and every one of them wound up in jail. For around five years, the town was entirely run by females.

“These fishermen were so stupid,” she said, noting that the men went from driving “beat-up trucks” to Rolls Royces. The blatant turnaround eventually led to their arrest.

“It was an area filled with crazy schemers,” she said.

The anecdote never made it into her book, Orlean said, though she did get a good sense of the place.

Orlean also spoke briefly about her experience as a staff writer for the New Yorker.

As opposed to other magazines, where editors pitch stories to writers, the New Yorker expects its reporters to come up with their own material, she said.

“Part of what we do is bring ideas that aren’t run of the mill, that aren’t typical,” she said. “It becomes a kind of habit of mind.”

The original piece about Laroche came from a blurb she spotted in a copy of the Miami Herald tucked into the back pocket of an airplane seat on her flight home from a vacation, Orlean said.

The brief, about a man caught stealing orchids in a swamp, struck her as “so peculiar” that she pitched the story to her editor, she said.

The topics she winds up writing about are “a combination of luck and instinct,” Orlean said.

And in general, she said she tends to gravitate towards topics of which she has no knowledge.

“Usually I’m done with one piece, and I start from zero,” she said. “I just hope I’ll fall into something.”

The current article she is working on, Orlean said, sprang from a conversation she had with an eleven-year-old girl about a particular hobby of hers. Orlean did not elaborate on the nature of the hobby.

“It’s more rare for me now to meet people in the course of my reporting who aren’t familiar with my name,” she said. “You feel more observed when you’ve gotten this kind of attention.”

As “disconcerting” as the increased recognition is, Orlean pointed to heightened expectations about her next book as a concern.

“Probably the only really persistent issue is slight anxiety about my next book,” she said. “But that probably would been the case anyway.”