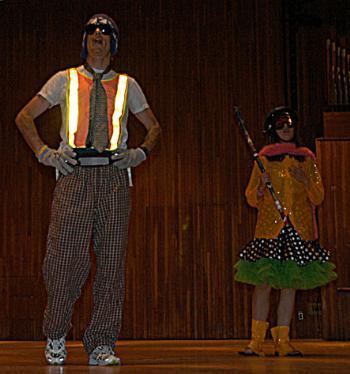 Hundreds of students, teachers and family members and friends came together at the Summerbridge Cambridge Celebration, which marked the end of this summer’s educational program, last night in the Kresge Auditorium at MIT.

The night’s two hours of displays and performances denoted the culmination of a summer designed to give 100 middle school students—most of whom are from low-income households and will be the first in their families to go to college—the confidence they will need to be academically successful in high school and beyond, the program’s Executive Director Hilary Mead said.

In the first hour of Celebration, many students stood by posters, graphs and experiments from classes this summer.

Loren Chen, a rising seventh grader at the Martin Luther King School and second-year Summerbridge student, said the favorite dessert he learned to make in his “Chemistry of Cake” class was Mary Fields apple cake.

As he passed out “Summerbridge Sports Illustrated” magazines from his “cleats and commas” class, Chen added that his favorite memory from the program was his group’s second-place finish in a contest to see who could pick up the most litter alongside the Charles River last summer.

Jason Yu, a rising seventh grader at Belmont Day School, said his “Move That Body” anatomy class had determined through surveys that Summerbridge students got enough exercise, but needed to cut fast food from their diets and add in several glasses of milk.

Meanwhile, other students performed skits in a rehearsal room at the Kresge Auditorium. Stephan Silva, a sixth grader who anchored a mathematically oriented “nightly news” program that featured graphs on politics, entertainment, sports and the weather, said he had practiced for hours for four straight days to nail his part.

“I think it turned out great,” he said.

Later, all the spectators watched as Summerbridge students performed a step dance, a trial of six countries involved in World War I and poetry readings on the main stage.

Teacher Charity C. Glass ’05—herself once a Summerbridge student in Pittsburgh—spoke about what the program meant to her over the years.

“Summerbridge is not a place or a job or a camp—it is a lifestyle and a community,” Glass said.

The night concluded with “Spirit Boy” and “Spirit Girl,” the Summerbridge mascots, leading the teachers in an ode to their students.

“Celebration is one of the first experiences our students have in being in a big production and rehearsing and trying again and performing on a big stage in front of people,” Mead said. “They are setting a new bar of excellence for themselves in terms of what they can do.”

Despite what Mead calls a misleading name, Summerbridge is a year-round tutoring program for Cambridge public school students.

Beginning in the sixth grade, the pupils are asked to make a two-year commitment to take on the workload from the program—which Mead said includes not only additional class time during the year, but also six weeks of classes and two hours of homework per day in the summer.

“It’s pretty intense for a 10-year-old to commit two years of his life to a program,” Mead said.

In order to find the most intellectually curious students, representatives of Summerbridge visit every fifth-grade classroom in Cambridge public schools each year in a recruitment effort, said development intern Adam G. Zolesk ’07.

This year, twice as many students applied as there were spots in the program, Mead said.

In return for their commitment, the 100 students receive their instruction tuition-free. In addition, Mead said students can opt to return to the program for a third year, beginning with the summer before eighth grade. Former students still invested in the program can become junior teachers, Mead said.

In the summer, students attend class from 8 a.m. to 4 p.m. Every student must take one mathematics and one literature class.

Students also take two elective classes—the curricula of which are designed by the teachers themselves, Mead said. The subjects of this year’s electives included the chemistry of cake baking, sports literature, electing a president, natural disasters, and ethnic enclaves using Chinatown as a case study.

But academics are not the sole focus of the summer program. Students are encouraged to participate in extracurricular activities ranging from field hockey to pretzel-making, Mead said.

“It’s really about building their cultural capital,” Mead said. “One of those habits they’re learning this summer might be the hook on their college applications later down the line.”

In addition, each day features an extended lunchtime with student and teacher performances and community meetings in which students discuss issues in their lives with their teachers.

About once per week, students receive special programming, like the “Olympics” athletic competition or the “math trails” scavenger hunt through Cambridge.

Mead said the average cost of running Summerbridge for a summer is $300,000.

While the program receives 10 percent of its funding from Cambridge schools, Summerbridge still needs to mount a significant fundraising effort.

Harvard donated to the program for the first time last year, Mead said. She added that not only did Harvard increase its donation this year to $6,000, but it also made free housing for teachers available at Peabody Terrace so that qualified applicants would not be deterred by the cost of living in Cambridge for the summer.

To help pay Summerbridge’s operating costs, the objectives of Celebration were themselves expanded this year to include garnering publicity and funding.

In the past, Celebration was designed for an audience of mainly parents and other relatives. This year, the event was publicized to help spread awareness of the Summerbridge program, development intern Sara E. Di Bonaventura ’05 said.

“We’ve existed for 13 years and still not everyone knows about it—which I think is a crime,” she said.

Di Bonaventura added that she and the office staff made multiple attempts, including mail invitations and telephone follow-up calls to Cambridge residents, to attract attention to Celebration.

In addition, a new fund raising objective was added to this year’s Celebration. Zolesk said since May, he has been attempting to gain sponsorship for the event from local retail outlets, businesses and law firms.

“We’re trying to contact corporations that you can call one day and speak to the owner the next,” Zolesk said.

Zolesk said he felt compelled to ask for sponsorship money—in exchange for which Summerbridge could guarantee advertising at the event—rather than donations because businesses tended to want an added incentive to give with the poor state of the economy.

Ticket-holders to last night’s program were also asked to donate to Summerbridge.

Both development interns remarked that until their duties commenced this summer, they had never appreciated the ties between the workers of a non-profit organization and those working behind the scenes to fund them.

“You can’t do any development unless the teachers are amazing—and well-funded,” Di Bonaventura said.

Summerbridge does not only cater to the students, but to the needs of the teachers as well, Mead said. The program goes out of its way to hire high school and college students who are seriously considering teaching careers. By the time the teachers complete a full summer of designing and implementing curricula, they should have a much better sense of their career goals, Mead said.

Mead said the competition to become a teacher in the program is far more intense than that to become enrolled as a student. This summer, over 300 people applied for 28 teaching positions.

Di Bonaventura, who was on the Summerbridge faculty admissions committee this year, said the applicants had to possess several qualities beyond the desire to teach to be accepted to the program.

“Individually, we were looking for people who are incredibly motivated and dedicated to education, people who have a very sincere interest in children,” she said. “We’re looking for what understanding they have of middle school students, in terms of what interests them and what their problems are.”

Di Bonaventura said the prospective teachers had to survive a three-hour group interview in which they had to present a seven-minute mini-lesson and design a field trip in half an hour with other applicants.

“It’s a very real situation compared to what we do—teachers in the summer are asked to do a lot in a very little amount of time,” Di Bonaventura said. “Our teachers don’t get a lot of sleep.”

After the group interview is completed, the applicants are asked to meet one-on-one with a Summerbridge staff member and have to complete a self-evaluation.

Mead added she was pleased with the results of the interview process—one that was revamped this year.