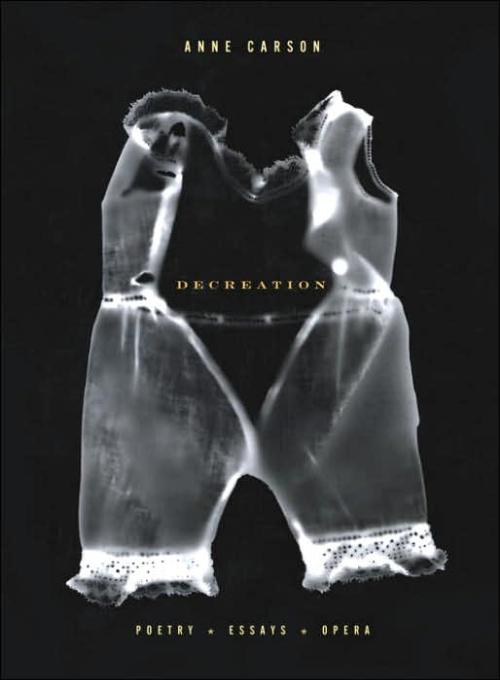 To read Anne Carson is to read by intuition. Acquaintance with her collage of sources is not a prerequisite for appreciating her poetry, although familiarity with literary form enriches the experience. “Decreation,” her first book in the last five years, is a hybrid of poetry, essay, libretto, screenplay, oratorio, and illustration.

Driven by the loss of her mother in 1997 and her brother in 2000, Carson’s book is in the tradition of Robert Lowell’s “Life Studies” (1959). But where elegies on his parents, grandparents, and literary friends took an all-too-personal tone in Lowell’s pivotal volume, Carson is less confessional.

Only the first section of introductory poems refers to the death of Carson’s mother directly, and even those are mediated by literary allusion. As tender as it is to remember visiting her mother being “like starting in on a piece by Beckett,” the epigraph she leaves is bare and cold: “There is so much wind here stones go blank.” The book is penned in defiance of this natural erasure, with Carson’s remembrances acting as a moving apotheosis for their subjects.

Other than her mother, Carson elegizes three historical women in the titular essay of the volume, “Decreation: How Women Like Sappho, Marguerite Porete and Simone Weil Tell God.” The intense intellectual consideration of these women and their conceptions of decreation (what Weil articulates as the necessity “to undo the creature in us” and what the other women demonstrate is the expulsion of self in order to accommodate a deity) leads to a mediation on their merits and martyrdom in an opera of the same title, “Decreation (An Opera in Three Parts).”

Actually performed once in 2001 at the Culture Project in New York City, the opera is less a literary experiment than a testament to the profundity of Carson’s work. Dark, deep, and clear, the opera and the essay both manipulate their dramatis personae into the same act of destabilization that Carson observes in the characters of Virginia Woolf: “the narrative voice shifts from ‘we’ to ‘one’ to ‘you’ to ‘they’ to ‘I.’”

It is perilous to quote Anne Carson’s poetry or prose, the author herself defining a quotation as “a slice of someone else’s orange.” Less tactful, her definition of the verbal equivalent is to “suck the slice, toss the rind, skate away.” But risking perilousness, Carson writes that “Brittle failure occurs / of course / when stress on a material exceeds its / tensile force.”

Because tension abounds in the volume, one wonders whether her material sustains the pressure of presentation. An essay like “Every Exit is an Entrance” praises sleep and offers an unrelenting catalogue of literary evidence, but does it fatigue when forced to accommodate Keats, Kant, Aristotle, Bishop, Woolf, Homer, Stoppard, and Plato in the space of 22 pages and one lyric ode?

Sustaining such energy seems improbable, Carson herself ostensibly admits so in the book’s conclusion: “As usual she enjoyed the sense of work, of having worked. / Other fears would soon return.” But, Carson’s is the business of creative biography, of documenting selves, of finding a historical persona in which she can be comfortable, so this shuffling of personalities is necessary. However intrepid the search for and the destruction of self, Carson’s writing remains circuitous, employing the language of quotation and experiment to arrive at her own meaning.

To borrow a word from Lowell’s volume, Carson is the difficult “paramour” who returns now, five years overdue. Her style, though unsettling and unseen for half a decade except in a few journals, becomes familiar as “Decreation” unfolds in lamentable seriousness, producing a book that intimates its few faults and overwhelms all of its readers’ objections.