Does Harvard Have an Appetite for Rock and Roll? 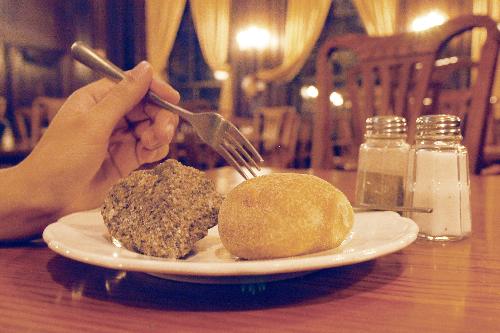 Harvard has never been a paradise for rock and roll. Look at any bulletin board: around here, cellos are preferable to guitars, bhangra has a greater following than any one campus band, and a cappella concerts fill Sanders Theatre on a regular basis.

Is this because we, as a student body, possess an innate inability to rock out? Or is there some precondition for rock missing that, if present, would reverse the bulldozers’ direction and convert Harvard into an extension of rock-friendly Allston?

Intuition makes the former seem unlikely, as Harvard has produced its fair share of successful rock musicians. Weezer’s Rivers Cuomo, Class of 1998, is the most prominent recent example. But he didn’t start at Harvard until well on his way to rock success.

Still, renowned guitarists such as Dean Wareham ’85 (of Galaxie 500 and Luna) and Rage Against the Machine and Audioslave’s Tom Morello ’86 spent their undergraduate careers as mild-mannered Social Studies concentrators, and didn’t find real musical success until after leaving the Square. Perhaps Harvard is holding back musical genius, after all.

Take the post-punk ensemble Blanks. When the band formed in 2003, members Matt Boch ’06-07, Jon Carter ’06-07, Long Le-Khac ’06, and John T. Drake ’06 seemed logistically ahead of the curve. Already possessing their own instruments (and knowing how to play them), they simply needed to practice. Yet this turned out to be much harder than they imagined.

“We got kicked out of every practice room freshman year,” says Boch. “Started at Wigglesworth C, got kicked out, then Matthews, got kicked out, ended up in Straus. Even there we were still asked to stop playing a lot of the time, and spent a lot of time competing for the spaces instrumentalists: flute players, violin, and the like.”

According to Le-Khac, “Even at normal hours, like before 9 p.m., we would get complaints from the proctors in Wigglesworth. The practice rooms are very much structured for ‘traditional’ instruments and not for rock music at all.”

Frustrated with the situation, Boch sent a belabored e-mail to the Freshman Dean’s Office (FDO) and the relevant deans, enumerating the reasons that practice rooms should be open to musicians of non-classical persuasions.

In each case, he was either ignored completely or told that they had no place to play amplified instruments in the Yard. “That’s the kind of little thing that makes it so hard to start a band,” adds Le-Khac.

Yet their dreams of regular practice space and enthusiastic audiences may soon be fulfilled; two separate groups are planning a new era for the campus scene, hoping to nurture Harvard rock for musicians and listeners alike.

One of the leaders of the rock revitalization movement, Shirley L. Hufstedler ’07, the drummer for Plan B for the Type A’s, one of Harvard’s most accomplished musical acts, says she has long dealt with institutional apathy. In response, she has founded a group entitled the Coalition for the Advancement of Rock And Roll (CARAR).

Lest the group effect the same type of neglect it is designed to fight, the term “Rock And Roll” here should not faze the guitarless; according to Hufstedler, it is meant to be a “catch-all,” including “all the kids that are currently excluded, that don’t have groups” dedicated to their styles of music, like electronica and rap.

Although the organization’s name may be grandiose, its goals are comparatively grounded. “Right now, the campus lacks adequate practice space and equipment for beginning bands,” says Hufstedler, describing their primary focus.

Their answer to this dilemma is communication. According to Hufstedler, “there are plenty of musicians, but no network to connect them.” Drake maintains that Harvard has no cohesive scene, but only “a bunch of Facebook groups, very fragmented.”

Hufstedler envisions CARAR, which is currently awaiting official recognition as a student organization, as the “center point” of the Harvard rock scene. The group hopes to remedy the lack of knowledge about resources available to student musicians and create some new resources of its own.

By simply getting musicians in touch with each other, the group hopes to alleviate the problem of practice space. The space, it seems, is out there, if you know where to look. Blanks. eventually began practicing in a more rock-friendly but less comfortable room in Leverett. Hufstedler believes that CARAR can arrange something comparable for all beginning rock musicians around campus.

CARAR says it recognizes that the real difficulty is in cornering the funds to purchase communal amps and a drum kit. Their solution here is once again networking; if the younger musicians are all friends with their elders, the hopeful logic follows, they will be able to borrow the necessary equipment.

Still, loaned is never as safe as bought. Whether or not fostering a community leads to more communal use of property depends heavily on the generosity of more established bands.

To return to the example of Blanks., this generosity can most definitely come back to bite groups. As Boch recalls, the band formerly had “a problem with freshmen breaking our equipment. Not maliciously or anything, they just didn’t know how to use it.” The band “wants to provide help for new bands, but we can’t be the equipment sponsor for the whole river.”

Whether or not CARAR can deal with equipment problems, it seems sure to help bands form. It’s a common story on campus: musicians want to join a band, but cannot find others with the same musical interests.

A typical example is Freefall, a pop-rock quintet that for a time was stalled at a duo. According to vocalist and guitarist Kevin M. Bombino ’08, the search for a rhythm section was exhausting. “We used Facebook and postered to find musicians and that got us a bass and a keyboard.”

The drummer proved more elusive. “We ended up going to a practice for THUD (The Harvard University Drummers) and asking everyone on the way out.” This laborious technique did yield a full band, but most feel there must be an easier way.

CARAR’s remedy: band speed-dating. The organization plans to host an event later this year in which all Harvard’s musicians looking for a band or bands looking to add members can communicate and aggregate.

If CARAR’s great leaps forward in practice space, equipment, and band formation come out as envisioned, Harvard will soon be teeming, rainforest-like, with talented and well-practiced rock groups.

But how many hours of plugging away in the basement of Wigglesworth are as beneficial as getting onstage and performing for a crowd? At some point, every group that claims to rock has to play some shows.

According to Hufstedler, this is another problem endemic to new bands, and again she is prepared with a possible solution, saying that “there are many bands just getting on the level where they would play shows, but they don’t know how.” With knowledge pooled, everyone would ideally know how to get booked at campus venues.

One possible fly in CARAR’s ointment is their supposition that steady venues exist around campus, which is far from assured. While performance opportunities at Pub Nights and house-sponsored coffeehouses ensure that this assumption is not completely unfounded, the Quincy Cage remains the most reliable stage for many Harvard bands.

While the Cage’s management has been admired for all of recent memory, the new team of J.P. Sharp ’07, Teddy R. Sherrill ’08, and Abe J. Riesman ’08 promises a banner year for the venue.

Sharp describes the Cage as unique, and asks, “Where else in the houses can Harvard bands regularly perform? [...] With everything else so orchestra- and a cappella-dominated, it’s important that it’s there.”

Blanks.’ Boch agrees. “It’s probably the best space on campus. The Cage is a great way to rock a lot of people.”

Beyond fixing the broken P.A. system and continuing to provide plentiful free beer, the Cage this year looks to expand its horizons to include performances by nationally known indie acts. On this year’s plans, Sherrill explains, “We’re trying to increase the quality of shows, to give people an incentive to come other than beer.”

The importation of major acts is not designed to make life difficult for Harvard bands. Rather, it would give these bands a chance to open for their better-known brethren. This idea, common to both CARAR and the Cage, seems to enjoy wide support.

According to Hufstedler, such a plan “could allow Harvard bands to interact with national bands, letting them branch out to the real world.” Building Harvard bands’ resumes as opening acts to more famous groups would facilitate performance in the wider world.

At the same time, the Cage management team is thinking of ways to increase turnout for Harvard’s bands without outside help. “We’re planning a rip-off night,” says Sherrill, “where a Harvard band has to become another band for the night in terms of appearance, songs, everything. We hope that they will transcend ‘cover band’ and reach the state of ‘tribute act.’”

These changes to the Cage are also grounded in a cohesive theory. “There needs to be a democratic process in which we can get, or not get, as was the case with Snoop, concerts according to the interests of actual students,” says Riesman, who is also a Crimson editor. “We’re not trying to punk the UC, we’re trying to create a punk alternative to the UC.”

This is not to say that the UC and the related Harvard Concert Commission (HCC) are as out of touch as it is easy to make them seem in this post-Snoop world.

According to HCC member Clinton M. Siegfried ’07, the 15-to-20-member commission works nearly year-round to organize its two annual concerts. Their funding comes from a UC grant, with the charge that they provide Harvard students “with a great show at a great rate.”

Whether or not you care to go see “whoever most people will get psyched for,” as Siegfried described the quintessential HCC act, even skeptics must admit that Bob Dylan tickets were only $25, not $50 as they would have been elsewhere. The Commission’s heart may be in the right place, but according to Riesman what Harvard really lacks is “a place to see bands like Wolf Parade for $5.”

Outside the HCC, the UC’s efforts provoke a mixed response from the rock scene. Blanks. come down on the affirmative side, with Boch proclaiming that “the UC’s been good to us,” sponsoring Blanks.’ shows in the past. But he also says that the system is far from democratic, claiming that receiving council largesse “largely has to do with who on the UC you are friends with, just like in the real world.”

Sharp is skeptical of the Council’s workings. “People are always suspicious of [the Cage]. The UC audits us every year. It’s supposed to be random, but it doesn’t seem random. We’re clean though.”

All possible merits and malfeasances of the UC aside, the possibility of Harvard’s rock revival seems to depend on better access to practice space, equipment, other musicians, and performance opportunities. Whether these materialize out of the efforts of CARAR and the Cage, and whether these improvements have any real effect on the campus scene, is still in the cards.

The efforts of a handful of students won’t create Harvard Rock City overnight, but if these dreamers get their way, drummers may soon compete with tenors for space on Yard bulletin boards.

—Staff writer Eric L. Fritz can be reached at efritz@fas.harvard.edu.