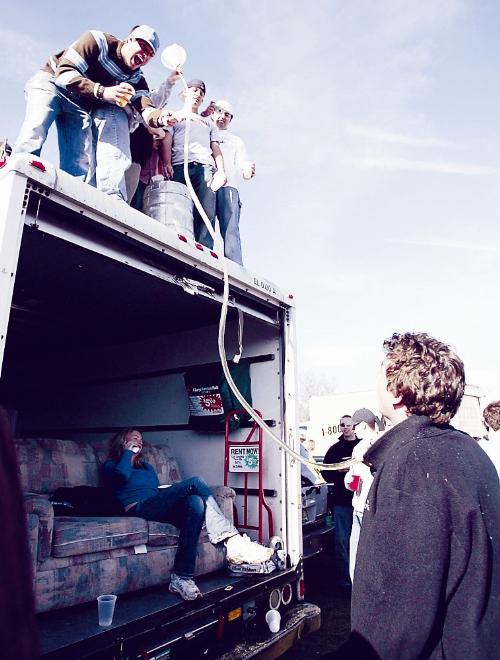 Students funnel beer and forget the Game while standing atop U-Hauls at the 2003 Yale tailgate. These activities will be banned at this year’s event.
By Margaret W. Ho and Joshua P. Rogers, Crimson Staff Writerss

New restrictions at the Harvard-Yale Game in New Haven this year will require tailgates to end by the beginning of the third quarter and will prohibit drinking games or drinking paraphernalia, Yale College announced yesterday.

Unlike last year in Cambridge, student group tailgates this year will be split across several different fields, with all Harvard House and Yale Residential College tailgates occupying a single lot.

Unlike the Game last year at Harvard, Yale will allow kegs and U-Hauls for the event, but Houses and Residential Colleges may only bring one U-Haul each.

Last year, in response to widespread concern about underage drinking and pressure from the Boston Police Department, the Harvard Office of Student Activities implemented a number of restrictions centralizing all undergraduate tailgating and banning U-Hauls entirely. Last year’s tailgate also saw centralized liquor distribution and ticketed alums and guests. The College has also banned kegs at the Game, in Cambridge, since 2002.

Associate Dean of Student Affairs for Yale College Betty Trachtenberg attributed the new restrictions to concerns over student safety at tailgates, particularly at previous Harvard-Yale games. She also said the rules were aimed to encourage higher student turnout inside the stadium.

“There’s a football game going on,” Trachtenberg said. “It’s not an alcohol contest for the student body.”

This year’s regulations also prohibit students from standing on top of trucks or other vehicles.

Student reaction to the regulations, which apply to all Yale football games starting Nov. 5, was mixed.

“I think it’s perfectly reasonable to ask people to go to a small part of the Game,” said Yale College Council (YCC) president Steven C. Syverud, who is a senior.

“They shouldn’t be telling us whether we’re interested in the football game or not,” Capp said. “They’re even acknowledging that some people might not be interested if they’re giving buses at halftime,” he added, citing Yale’s new rule that buses “in adequate numbers” will be provided to accommodate students who wish to return to campus after half-time once the tailgate has ended.

“A lot of students enjoy the activities that surround [the Game], most especially the tailgates,” Glazer said. “I appreciate efforts to encourage students to go to the games—they’re great games to go to, but it shouldn’t be as a result of forcing students to leave another activity that they enjoy.”

But Lowell House Committee (HoCo) chair Neil K. Mehta ’06 said that in spite of disappointment over the ban on drinking games and limited tailgating, he thought the rules were sensible.

“I think [Yale has] taken the right steps by keeping people off the top of U-Hauls and trying to make it clear that they care about the safety of students, but not encouraging students to drink hard liquor, which I think was detrimental last year,” Mehta said.

Mehta said HoCos this year would have to find another way to attract students to their tailgates, now that “novelty items” such as Beirut and ice luges are banned.

Anyone, including student groups and non-HoCo student groups can purchase permits for tailgating on other fields for 13 dollars on a first-come, first-serve basis, according to Trachtenberg.

But while Kidd said that University Hall was consulted on these policies, Glazer and Capp said that Harvard undergraduates were not part of the discussion.

The revised rules for the Game come at the same time that a separate 13-member committee is reassessing Yale’s overall alcohol policies.

Trachtenberg said the restrictions on the Game are not open to reconsideration this year, and may be in place for years to come.

“This is our first and final version,” she said.

Last year, in response to student concerns over the new tailgating regulations, the OSA and the Undergraduate Council worked together to revise the original restrictions, which were explained to HoCos late last Sept.

But Brittenham said that, to her understanding, the committee reassessing Yale tailgating rules had already reviewed the policies extensively.