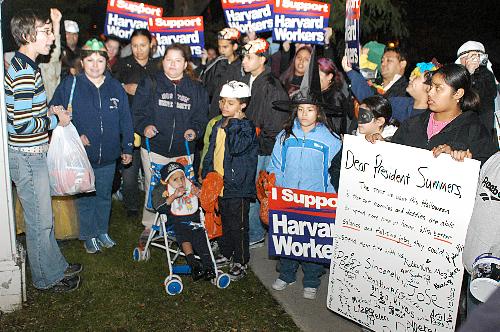 Harvard janitors, their children, and student organizers attempted to pull a Halloween trick on University President Lawrence H. Summers at his house last night in an effort to raise awareness for the janitors’ living-wage campaign.

But when the door of Summers’ Elmwood estate opened, protestors were treated instead to the smiling face and enthusiastic demeanor of one of the president’s aides.

“Hey guys! Happy Halloween! Do I hear trick-or-treat?” said the staffer, who declined to be identified.

Union organizers and members of the Student Labor Action Movement (SLAM) joined the janitors and their families for the surprise trick-or-treating event at Summers’ home.

Summers, who was tipped off about the visit by a member of his staff yesterday morning, was attending a prearranged dinner at the Radcliffe Institute for Advanced Study, according to University spokesman John Longbrake.

The staffer didn’t miss a beat when she opened the door to the horde of nearly 50 children, janitors, and students standing on Summers’ doorstep—many of whom were waving SLAM’s pro-labor signs.

The children, who held a large sign displaying a letter addressed to Summers, were distracted momentarily by the candy in the large plastic bowl held out to them.

“Come on guys, what do you say?” the staffer said in a playful voice as she began to back into the house.

“Thank you!” the children sang back.

Finally remembering their task, a few of the children began to read their letter, which had been written on a large sheet of posterboard.

“Dear President Summers,” they read, “The treat we want this Halloween is that our mommies and daddies are able to spend more time at home. With better salaries and full-time jobs, they could spend more time with us.”

“Fabulous!” the staffer said as the crowd backed off of the doorstep. “Have a happy Halloween!”

After one of the protestors dropped his sign, the staffer said, “You forgot this!” and handed it back to him.

At least three security guards and one Cambridge Police Department (CPD) officer were present outside the estate as the protestors arrived.

Though SLAM organizers told The Crimson that they hoped the Halloween protest would be a secret, an article in yesterday’s Boston Herald reported that the group would be springing a “surprise Halloween demonstration” on administrators.

CPD was informed about the event before 3 p.m. yesterday, said the officer, who did not wish to be identified.

Gathered down the street after the trick-or-treating, some janitors said they were disappointed that Summers was not home.

“We just wanted him to come and say, ‘I understand, I know where you’re coming from,’ even if he doesn’t do anything,” said Crismely Pimentel, whose husband, Oscar, works in Leverett House.

“She just cares about the candy,” Pimentel said.

SLAM organizer James M. Leaf ’09 said that involving the janitors’ children in the workers’ fight for higher pay was a way to reinforce the family-wide impact of Harvard’s wages.

“It makes sense to involve the kids because they’re the ones being affected,” he said. “The kids directly suffer from inadequate wages.”

The idea for the trick-or-treating event crystallized at a SLAM meeting with the Service Employees International Union (SEIU) during SLAM’s Workers’ Week in early October.

SEIU is currently renegotiating the janitors’ contract with the University. The current contract expires Nov. 15.

“There are 46 different proposals that we’re looking at in these negotiations,” Longbrake said last night. “We are not going to negotiate in the press but...our past negotiating sessions were overwhelmingly approved by the membership and we’re looking forward to continuing to bargain in good faith.”