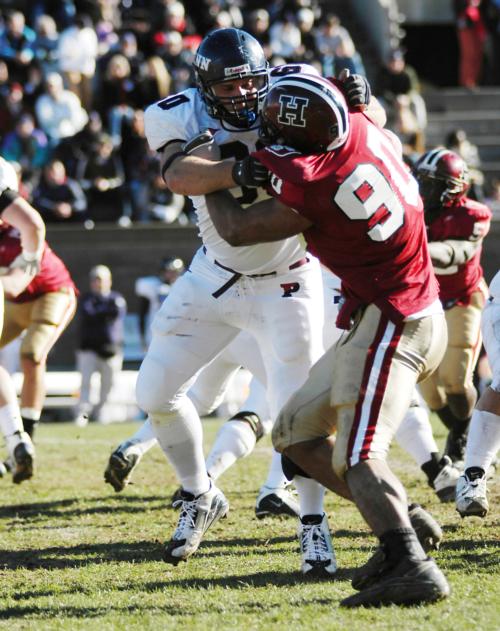 <font size=2> <p>After being suspended for a year in the offseason, Desmond Bryant returned to the field early this past weekend versus Penn<em>.</em></p></font>
By Timothy J. Mcginn, Crimson Staff Writer

Their season was supposed to have ended in January. Violation of team rules, suspended for the year, Harvard coach Tim Murphy said. They were good kids, he stressed, but what they’d done had left him no choice.

Sophomore Russ Schober had been arrested by officers from the Cambridge Police Department for public intoxication. Classmate Desmond Bryant had done something serious enough to warrant the same penalty, though neither he, nor Murphy, nor anyone else was quick to say what. Didn’t really matter. Harvard was out a defensive back and a likely All-Ivy defensive end, and Schober and Bryant were out on their behinds heading into 2005.

They’d practice, they’d attend team meetings, they’d even be on the sideline come Saturday. But they wouldn’t take the field for a single down. Not one, Murphy said.

Ever the disciplinarian, Murphy had laudably put his foot down. No rap on the knuckles, no meaningless off-season punishment, no token one-game suspension. A full slate wiped away to send the message that such behavior would not be tolerated, no exceptions, not even for Bryant, arguably the team’s most talented defensive lineman heading into the off-season.

It was a classic dose of tough love, and one that figured to hurt Murphy and the 100 other guys on the roster, too. But Murphy didn’t relent. Going back on his word would have done more damage to his tough-guy image than handing down a weaker sentence and seeing it through.

“Sometimes they think I’m stubborn,” Murphy said. “But I tell them one man’s stubbornness is another man’s strong convictions.”

And Murphy wasn’t about to compromise his. Even after senior offensive lineman Will Johnson came to speak to him five weeks ago about paroling Bryant and Schober, Murphy held firm. He’d made up his mind in January and wasn’t about to change it mid-course.

Not for a couple of days, anyway.

“A lot of the people thought my penalty was too harsh,” Murphy said. “And so I said, ‘You know if they continue their exemplary behavior’—this was five weeks ago—‘and I’ll let them play in the last two games.’

“It was [Johnson] making me realize that this was really the fair thing to do.”

And that’s where my Skip Bayless-styled self-righteous indignation kicks in. What did Murphy expect Johnson to do? Was there any doubt someone would ask for the suspensions to be shortened?

It isn’t as if Bryant and Schober had pulled a page from Terrell Owens’ playbook, turned on their teammates, and poisoned the atmosphere in the locker room while attempting to renegotiate their contracts. They had—or at least Schober had—been caught breaking a law that most college students have, at one point or another, probably broken themselves, just without being busted.

Was Johnson going to knock on Murphy’s door, step into his office and say: “You know, coach, I’ve been thinking about Russ and Dez. Me and some of the guys think what they did was really bad—really bad—and you should probably go ahead and tack on a little more punishment. Maybe keep them out of spring ball too.”?

Johnson shouldn’t be blamed for trying. He’s obviously a good teammate who cares about his friends. Hard to fault someone for that.

It’s just that Murphy should have known better. And, what’s more, the timing of his decision stinks. Sure there were stipulations: Bryant and Schober hadn’t missed a practice or a meeting. In fact, they hadn’t so much as raised a peep about their punishment. And they had to replicate that behavior for a month in order to be reinstated for the final two games.

But what was happening five weeks ago, when Murphy flip-flopped? Harvard was losing, first to Lehigh, then to Cornell. It wasn’t inconceivable that the Crimson would fall from 10-0 one year to sub-.500 the next. What better way to help secure a winning season than to reintroduce a top player to the lineup in the year’s closing weeks? (Schober was a regular on special teams Saturday against Penn, and Bryant saw significant time at defensive end after the first series.)

Maybe I’m wrong, but that doesn’t matter. It certainly looks like Murphy was willing to trade in his principles for a leg up in locking down a couple extra wins over Penn and Yale.

Maybe he’ll get them and the Crimson will finish 7-3. But for a coach looking to send a message less than a year ago, this is already a losing season.