How do you market an Ivy League football player to the rest of the athletic world? By playing up brains first, brawn second 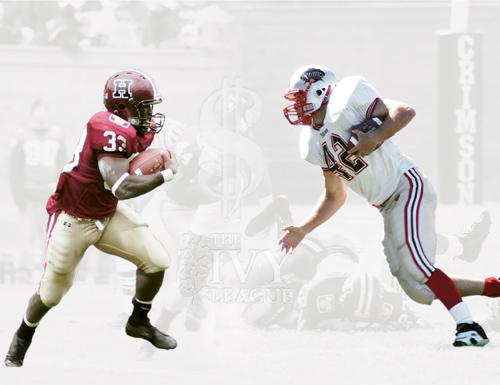 Brown tailback Nick Hartigan, right, has been profiled in USA Today and the New York Times for his Rhodes Scholar candidacy as well as his league-leading rushing yardage. Harvard junior running back Clifton Dawson, opposite, may undergo similar scrutin
By Timothy J. Mcginn, Crimson Staff Writer

The stars of the Ivy League are used to receiving attention from the press—columns, features, headlines, photos, and all the rest. The best of them have thousands of words written about them over the course of their careers. Most of that ink just happens to come from their college or local newspapers.

But as the Ancient Eight has climbed its way up the Division I-AA totem pole, the national media has ratcheted up its coverage in turn, peaking with its treatment of Brown senior running back Nick Hartigan this fall. Hartigan, who leads the league in rushing yards (1,498) and touchdowns (17), was profiled in both USA Today and the New York Times in advance of the Bears’ showdown with then-undefeated Penn on Oct. 29.

Even former Harvard quarterback and current St. Louis Rams backup Ryan Fitzpatrick ’05 did not draw that kind of copy. Sure, rumors of his perfect score on the Wonderlic personnel test prompted blurbs in Sports Illustrated and ESPN.com Page 2’s Daily Quickie. And broadcasters at the Hula Bowl frequently marveled at his participation in the all-senior event just moments before sitting for a final exam.

But even relative to Fitzpatrick’s story, Hartigan and his candidacy for a Rhodes Scholarship have, as Harvard Sports Information Director Chuck Sullivan said, “a lot of legs.”

“How many potential Rhodes scholars do you have that are leading the nation in rushing?” Brown Sports Information Director Chris Humm said.

Despite the obvious answer—not many—such an article doesn’t find its way into a major publication without a gentle nudge from the right people. Features on USC’s Reggie Bush and Texas’ Vince Young don’t displace themselves.

In Hartigan’s case, the Brown sports information office and its Ivy League counterpart worked in tandem to pitch his story and overcome one major obstacle: not many people follow Ivy League sports.

“That makes it a little bit more difficult obviously,” Humm said. “But once people find out about him—I know with USA Today he was on the radar screen for a while. It was just a matter of the right time.”

It doesn’t hurt Humm, Sullivan, and others pushing cases like Hartigan’s that the Ivy League is largely viewed as one of the last bastions of truly amateur athletics and actual student-athletes—particularly when contrasted with many of its Division I-A counterparts. USC quarterback and 2004 Heisman Trophy winner Matt Leinart, for instance, is taking just one dancing class in his final fall semester.

In contrast, according to Hartigan’s New York Times profile, he has maintained a 3.91 GPA and is writing his thesis on the up-and-coming alliance between Evangelicals and Catholics in American politics.

Similarly, Steve Rushin’s “Air and Space” column in Sports Illustrated following the Crimson’s 10-0 campaign in 2004 praised Harvard coach Tim Murphy and his players for winning the right way, so to speak.

“I think people like Ivy League stories because there’s a perception that we’re doing what’s right in college athletics,” Sullivan said. “When you hear about the nonsense that goes on and the corruption that’s associated with college athletics—that’s not what’s going on here.”

It’s tough to say whether or not the Ivy League will remain on the media’s radar. NFL-bound quarterbacks and Rhodes Scholar tailbacks are few and far between.

Among those likely to attract such a spotlight is Harvard junior running back Clifton Dawson, who, according to Sullivan, brings several different potential storylines to the table. A few of them have already been noticed by newspapers in his home in Ontario.

Sullivan said that as Dawson inevitably knocks down records next year, the media will likely come calling.

“I think it was a step in the right direction that he was chosen first team All-America by all the major governing bodies,” Sullivan said. “Something like that is rare from an Ivy League player.”

But just how rare—NFL draft pick rare, or Ivy running back and Rhodes Scholar rare—remains to be seen.