A Wright Version of Austen Charms 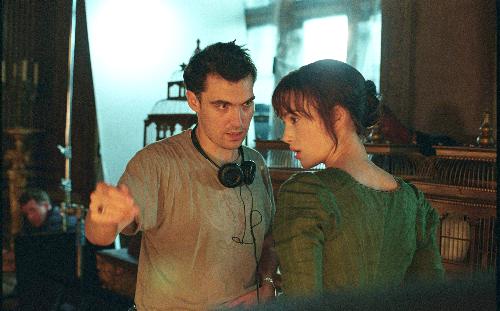 “Pride & Prejudice” is the first feature film for director Joe Wright. Yet, in his debut work, he demonstrates the intuitive mixture of risk-taking and creativity in his choices that mark the craft of a master filmmaker, whether in changing the setting of the film to 1797—the year that Jane Austen wrote the novel’s first draft—because of his distaste for empire line dresses, or by intriguing Dame Judi Dench by sending a candid letter that read, “I love it when you’re a bitch, please come play a bitch for me.”

The Harvard Crimson: How did you decide to make the film?

Joe Wright: Working Title, who had done “Bridget Jones’ Diary,” approached me with the script. I didn’t think I was going to like it much, because I thought “Pride and Prejudice” was for girls. I took the script to the pub and by about page 60, I was weeping into my pint of lager. I kind of got funny looks from the blokes at the bar.

THC: What struck you about Keira Knightley that connected her to this quintessential Jane Austen heroine in your mind?

JW: At first I thought Keira would be too beautiful to play Elizabeth Bennett. It’s the story of a fairly plain girl who gets a catch because of the liveliness of her mind. I went to this hotel bar, and in the darkened corner sat Keira. She was a right scruffy little thing and a proper tomboy. Keira says exactly what she thinks and she has an incredible lively quick wit. She’s very bright and she has a grand independence of spirit.

THC: What pressures, either personally or externally, did you face in adapting a greatly beloved novel, especially after there’s been a great adaptation by the BBC?

JW: I was quite lucky in that I hadn’t seen the BBC version and I was coming to it quite fresh. It wasn’t a book I had lived with for a long time. I felt a huge responsibility to a young girl [Jane Austen] who was 21, who sat in a parlor in English countryside in 1797, and wrote this book from her heart. I had a responsibility to her to be true to her and her creation. But I didn’t really worry about the whole baggage that comes with that novel.

—Staff writer Kristina M. Moore can be reached at moore2@fas.harvard.edu.