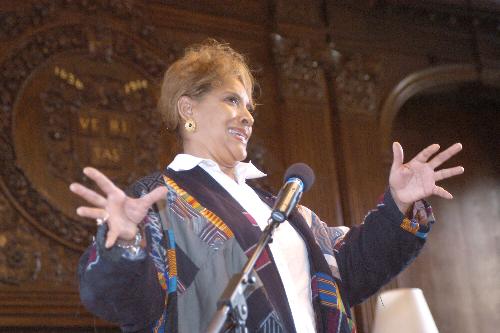 Phylicia Rashad, best known as Clair Huxtable from “The Cosby Show,” shared the lessons of her long acting career with students yesterday afternoon.

More than 100 students, many of whom spent their childhoods avidly following her role on the 1980s sitcom, gathered in the Kirkland House Junior Common Room to hear Rashad speak.

“It was the first time I ever felt like I lacked something,” she said. “My mind was constantly moving outward because I felt as though I had to please others in order to get the job.”

Rashad said she found an answer to her career confusion in Siddha yoga, a form of meditation focused on creating stillness and peace within the mind.

“Truthfully speaking, my entire career and life is based on [Siddha yoga],” she said. “My greatest moments on stage or before camera are times during which the mind isn’t thinking, but everything around me is still taking place.”

Rashad also advocated for the importance of the arts in education, recalling how her mother taught her to play music even before she learned to read.

“It’s an insult on the feminine divine to take arts away from schools,” Rashad said. “It seems funny to me that educated people are paying money to have programs taken away from their children.”

Rashad’s career has stretched through Broadway, television, and film. In 2004, she became the first African-American woman to win the Tony Award for Best Leading Actress, taking the honor for her role as Lena Younger in a revival of Lorraine Hansberry’s “A Raisin in the Sun.”

“Not only has her winning the Tony award inspired me, but as a child, watching ‘The Cosby Show’ was almost compulsory,” said Adrienne M. White ’08. “I feel like we’ve all grown up with her.”

The event was the second installment of this year’s “Conversations with Kirkland” speaker series, according to Kirkland Scholar in Residence Peter V. Emerson, who organizes the series. Rashad’s appearance was arranged by Susan D. Cooley ’06 and Emily J. Dubner ’06, co-presidents of the “Conversations with Kirkland” group, and was co-sponsored by the Harvard-Radcliffe Dramatic Club, Black Students Association, Harvard African Students Association, Association of Black Harvard Women, Immediate Gratification Players, and Kirkland Drama Society.