The Game Rendered Historic by Exciting Finish, Not Solid Execution 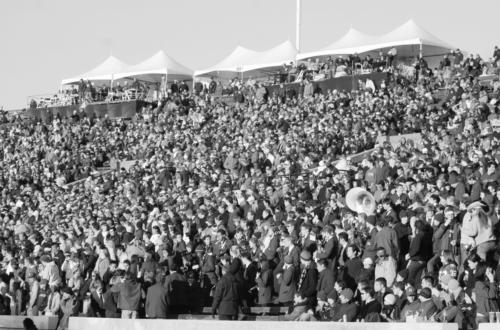 <font size=2> <p>The Harvard Band takes in the 122nd edition of The Game along with the 53,213 in attendance at the Yale Bowl.</p></font>
By Samuel C. Scott, Crimson Staff Writer

It wasn’t hypothermia acquired from four hours of sitting in an exposed press box, unfortified by strong drink. For me and a lot of other spectators on either side of the field, it was sudden heart failure.

Saturday’s performance may have been the most exciting game of college football I’ve ever had the privilege of fretting over.

“Personally, it was too stressful,” sophomore cornerback Steven Williams said. “I’d rather have had a blowout, but I’ll take a win either way.”

That was a screwy, madcap football game, a four-hour epic played into the twilight, a defense-oriented rollercoaster of heroics and disasters.

“Two weeks ago I said these are the games you remember the rest of your life,” said Yale coach Jack Siedlecki about his team’s upset of Princeton and loss to the Crimson. “They played two of the most memorable football games Yale has ever played,”

Saturday’s game is going into Harvard-Yale legend. For both sides, it alternated between being exhilarating and demoralizing.

It was the first time Harvard has won five consecutive playings of The Game, the first Ivy game ever to go into triple overtime, and it was a rarity in that neither team put points on the scoreboard until the third period—a credit to unbelievable defensive athleticism and painful gaffes on offense. The Crimson and the Bulldogs combined for nine turnovers, including four in five overtime possessions.

“It was a difference in one play. Plays that matter, like [nose tackle] Michael Berg made in overtime, I’ve never seen anything like that,” Murphy said. “I think it’s been one trait of this program, this team, is that we fight hard. We’ve been in this situation many times with our back against the wall, and we fight hard, and it says something for our character.”

This wasn’t a fairy-tale ending, however, and the heart the Crimson displayed in three periods of overtime was all the more significant because nothing was on the line but pride. League-leader Brown crushed Columbia 52-21 to secure a 6-1 record and its first outright league championship. The best Harvard had to hope for was a tie for second in the league.

Sometimes it seemed like this year’s Harvard football team was playing for drama, instead of playing for the win. What showed during The Game we’d already seen against Brown—the Crimson winning the hard way and trying to avoid the consequences of its mistakes.

Sometimes the mistakes have been too egregious to escape. Princeton shouldn’t have been a loss, and if it hadn’t been The Game would have been a fight for a slice of the Ivy title. Mistakes were made.

“There was no way [Yale] deserved to lose,” Murphy said. “We made too many mistakes, but despite that, for the lack of a better way to put it, we willed this one.”

Watching this year’s Crimson play football was an emotional and health risk: this was a team that doesn’t make for easy and stress-free watching, and everyone on the visitors’ side had adequate reason to worry—or to assume that Yale would have shipped us back to Cambridge with a long-awaited comeuppance.

On the game’s first drive, Clifton Dawson coughed up the ball—a rare occurrence in itself—on the Yale three-yard line. On the Crimson’s next possession, Harvard couldn’t make anything of six plays inside the 20 and had to settle for a field goal.

And if the first quarter didn’t go anywhere, in the second it just went downhill. Yale dominated the first half, with the Spence-McLeod rush combination breaking down Harvard’s run defense five yards at a time. The Bulldogs intercepted O’Hagan, forced three-and-outs on two drives, and putting up a 14-3 lead.

Under pressure, the Crimson hasn’t been a first-quarter team this season. This time, it wasn’t a second- or third-quarter team either. Somehow, in the last quarter, it made their previous inadequacies irrelevant.

After last year’s perfect season, there was nowhere to go but down. The team’s very mortal imperfections have made for some spicy football and meant that last year’s recovery from a massive deficit against Brown has not remained a rarity.

“It wasn’t pretty, but we got it done,” captain Erik Grimm said.

—Staff writer Samuel C. Scott can be reached at sscott@fas.harvard.edu.