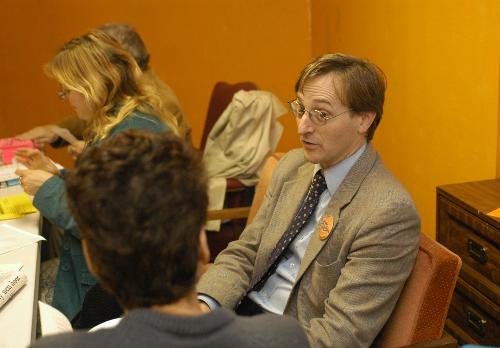 Jesse Gordon is in the running to become Cambridge City Councillors in Tuesday’s election. He will face all nine incumbents through Cambridge’s idiosyncratic voting system.
By Michael M. Grynbaum, Crimson Staff Writer

Jesse Gordon, hands planted firmly in pinstriped pockets, shoulders hunched and neck atilt, peers out at the dozen or so Cantabrigians gathered in the dreary ballroom that sits atop the Ryles Jazz Club in Inman Square.

The scene is a forum hosted by the Cambridge Republican City Committee, and Gordon—an intense man running as a challenger in next week’s City Council election—is pleading his political case.

Perched on a bare stage with a lone microphone, Gordon sprinkles his arguments with epigrams and political puns—a skill he says he picked up while earning his master’s degree in public policy from the Kennedy School of Government in the early ’90s.

A North Cambridge resident who has combined internet expertise with political activism, Gordon helped launch Mass for Dean, an online campaigning site for presidential hopeful Howard Dean, and worked as a technical director for Robert Reich’s failed gubernatorial bid in 2002.

A self-described “passionate progressive,” Gordon now wants to reform a City Council that he says is “really threatened by the concept of openness.”

It’s no easy task for a first-time candidate to steal a seat on the all-incumbent City Council. But Gordon’s wonky appearance belies a publicity hound who says he isn’t afraid to take on the “city establishment.”

“The thing I’m best at is making a stink in public,” he says with a touch of glee.

A New York native and graduate of Brandeis, Gordon writes in one campaign pamphlet that he “was born an idealist, and his ideas led him to become an activist.” His campaign platform includes calls for citywide wireless internet, expanded voter rights for 17-year-olds and immigrants, and greater transparency in city governance.

But local discontent over recent property tax increases lies at the heart of his appeal to Cambridge voters. Gordon argues that higher taxes have driven working-class and middle-class residents out of Cambridge, and says the current council is not working to ease the burden on homeowners.

In 2004, city residents were surprised by a steep rise in real estate values and an attendant tax increase. The City Council voted in September to offset the increases by buying down the debt with city funds.

Gordon says he’d been arguing this policy before the council in the months leading up to the vote, to no avail.

“Up until the moment of the vote, literally 10 minutes before the vote, they were still saying this policy was dishonest,” Gordon says. “Then 10 minutes later they voted for it. So I guess in those 10 minutes it converted to an honest policy.”

But Robert Winters, editor of the Cambridge Civic Journal, says the council’s action was a routine policy, and Gordon’s lobbying made little difference.

“What [Gordon] was saying the city should do is what the city does every year,” Winters says.

This difference of interpretation has cropped up elsewhere in Gordon’s campaign. The candidate has irked city officials and observers alike with a series of glossy flyers and pamphlets lambasting the municipal status quo. Some say not all of Gordon’s claims hold water.

“He’s the George Bush of the local left,” says Glenn S. Koocher ’71, a veteran Cambridge political pundit. “He says whatever he needs to say to get his points across.”

Gordon smiles when asked about the incident. He dismisses the assessor’s accusations as backlash from the political establishment.

Asked whether the figures on the flyer were correct, Gordon concedes some inaccuracy.

“It’s all well and good to say the Bank of America made mistakes and therefore I should be dismissed, but what it really means is this information is not accessible to the public—and it should be,” Gordon says.

The “fuzzy math” fracas was not an isolated case. Assertiveness has trumped accuracy, some have alleged, elsewhere on Gordon’s campaign trail.

In September, Gordon modified a flyer claiming an endorsement from current City Councillor Kenneth E. Reeves ’72, after Reeves requested that his name be removed. Reeves is also running in Tuesday’s election.

Gordon told the Chronicle last month that the printed flyer was a “misunderstanding,” but he now qualifies his remarks.

“I was trying to be nice to Ken,” Gordon says. “It wasn’t a misunderstanding. He endorsed me, fair and square, that’s all there is to it.”

Gordon says that Reeves signaled his support at the incumbent’s campaign kick-off event last June. Still, according to Winters, such gestures—which fall within the election-season norm—don’t imply an all-out endorsement. For many incumbents, gaining a challenger’s secondary and tertiary votes in Cambridge’s idiosyncratic proportional-representation system can spell electoral success.

Gordon attributes the confusion to his lack of experience campaigning.

“If you want to have an endorsement from an incumbent, you’d better get it in writing, and I didn’t,” he says.

Ultimately, Gordon remains unfazed by the criticisms lobbed against him, saying he’s benefited from the publicity.

“The most important challenge for any non-incumbent is name recognition. I think I’ve succeeded with that,” he says.

He shrugs off his missteps, preferring to emphasize the overall vigor of his campaign to storm the council. And he challenges his opponents to refute the substance of his points.

He says he considers criticism “the price you pay for running a public campaign,” and he calls on progressives of all stripes to support him at the polls on Tuesday.

“A real and meaningful challenge to the system can actually improve it,” he says. “That’s what my candidacy is in large part about.”