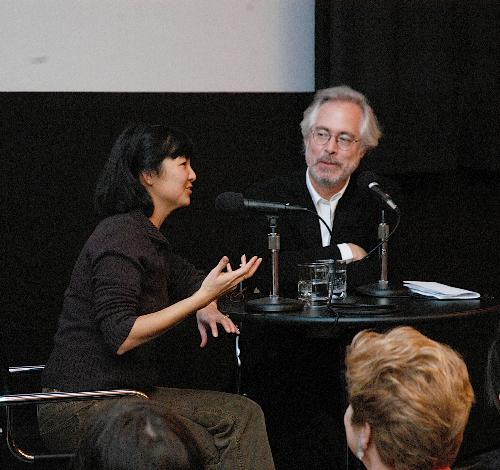 “I try to tweak perceptions,” the artist Maya Lin says of her work. True to form, Lin had the audience questioning its own assumptions about her and her art last night at the Carpenter Center, where she spoke with Bass Professor of English Louis Menand.

First, there was her appearance. Casually dressed in brown corduroy pants, black glasses, and a loose-fitting sweater, Lin answered with a soft-spoken demeanor that belied an intensely serious artistic sensibility as she guided the audience through a rigorous examination of her recent work.

Best-known for designing the Vietnam Veterans Memorial while a senior at Yale, Lin’s landscape and site-specific works create elegant, provocative structures out of unconventional materials and unexpected settings.

“Your artwork is considered serene and harmonious. Are you a serene person?” Menand asked at one point.

Lin laughed. “I’m hysterical. I’m probably one of the most insecure people you could ever possibly meet.”

Lin struck a balance in her remarks between demure and provocative, equivocating on some points—“I tend to reinvent things in a subtle way; at times, not subtle”—and asserting herself at others. Referring to the controversy over the design of the memorial at Ground Zero, Lin said that the “memorial is for everyone and no one group can dictate what is said.”

She said her work examines relationships between history and memory, text and image, old and new, two-dimensionality and three-dimensionality. “Input,” a 2004 installation at Ohio University in her hometown of Athens, Ohio, consists of a set of computer punch-card style rectangles arranged within a 3.5-acre park. Words and phrases are engraved on each rectangle, a multidirectional poem of sorts composed by Lin and her brother, Tan.

The piece’s unconventional form fits its content. “Memory is non-narrative and non-linear,” Lin said of the work, which partially involves her own nostalgia for the campus. “People say, ‘How do you read this?’ Any way you want.”

She said she intends her works to “point out what we don’t see, what we don’t realize.” The wire portrays the outline of ocean floor terrain near Antarctica, representing an unseen peak and gesturing toward hidden truths.

Lin and Menand maintained an easy rapport through the evening, with the professor, one hand pocketed in his navy blazer, sitting with the 46-year-old artist at a small table at the front of the lecture hall. Menand penned a profile of Lin for The New Yorker’s July 8, 2002, issue.

“She was marvelously articulate about her work,” Garber said. “This was kind of a natural way to bring together two people who are very interesting individually and who are even more interesting together.”

Though Lin is a true-blue Yalie—she earned two degrees in architecture in New Haven and is an alumni fellow of the Yale Corporation—she’s no stranger to Cambridge. Lin began taking classes at the Harvard Graduate School of Design in the fall of 1982. But the timing was not ideal. Lin was in the midst of a national controversy over her design for the Vietnam Memorial in Washington, D.C.

“I realized I was writing a paper for a course on theory on the shuttle back from testifying. I was thinking this is a really bad time to be in graduate school,” she said after the event, in an interview on her way to a dinner at Rialto with Garber, Menand, and other members of the Faculty.

And she sounded a note that many beleaguered Harvardians can relate to: “I inevitably wasn’t really able to focus on work at all here.”