THE PRICE IS WRONG, EDWARD

He was an NCAA champion, an NHL veteran, an Olympian...but Ted Donato ’91 might have missed his best chance at glory on a big stage 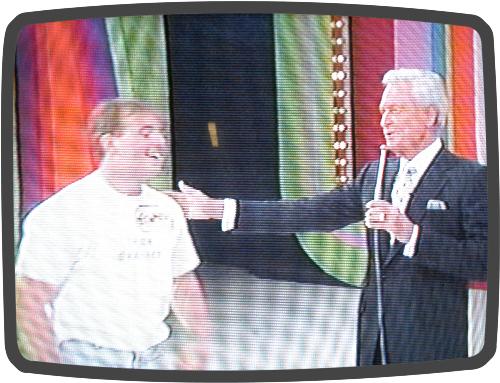 Tom Walsh stares at the television in the interview room of Harvard’s Bright Hockey Center. It’s one of the few places to boast a VCR these days, and once the tape begins, the senior defenseman is asked to identify the images dancing across the screen.

“Well,” he says, “here we have Coach Donato with about five hairs—which is four more than he has right now—hugging some crazy lady on ‘The Price Is Right.’”

It’s been more than 15 years since Harvard hockey coach Ted Donato ’91 hit it big. Fifteen years since he heard those 12 magical words prefaced by his name: “Edward Donato, come on down! You’re the next contestant on ‘The Price Is Right!’”

In his storied hockey career, he has been a member of the Crimson’s 1989 NCAA championship team, a skater on the 1992 United States Olympic squad, and a 13-year veteran of the NHL. But his appearance on “The Price Is Right”—“that,” Donato laughs, “has been a badge of honor for me.”

During spring break of his junior year, he was part of a Harvard contingent that hit Vegas for a buddy’s 21st birthday. It was decided that “The Price Is Right” would be fun, too, and the group made the noon filming on March 27, 1990.

All these years later, Donato’s skaters see the tape and laugh. Their coach sure “had a lot of hair,” back then, and he wore “some tight pants.”

But step back in time, and Donato’s just a giddy, round-faced kid dancing down the aisle to Contestants’ Row, pumping his arms above his head and wrinkling his white, tucked-in T-shirt that reads, “I’ve got the answer.”

Towards the back of the studio, rowdy cheers erupt from his Harvard buddies, who appear startlingly out of place in the sea of elderly women.

“How you doin’, Bob?” Donato returns with a grin so wide his face might snap.

“Are you from a university or a college?” Bob asks, at which point Donato invokes the old favorite, “Yes, I’m from Boston.”

Bob pauses, then repeats the school’s name. “And you’re studying what at Harvard?”

“Now when you finish with a degree in history,” Bob asks, “that prepares you for what?’

Donato answers this one immediately. “God knows,” he shakes his head.

The audience laughs, and in the blurry background, you can just make out a man with a mullet initiating a round of appreciative audience applause.

“Now that’s what I like,” Bob teases, unaware that “Edward” was MVP of the NCAA tournament a year ago and would skate in the Olympics just two years hence. “A young man who has really given his future some thought. He has, this one, and he knows it’s hopeless.”

Donato had sworn to himself that if he ever made it to Contestants’ Row, he wouldn’t one-dollar-up anybody. He just wasn’t a one-dollar-up kind of guy.

But in his second crack at The Item Up For Bid, a set of lamps and some eye drops, he is one-dollar-upped by contestant Elizabeth, who goes on to play for a new white Cadillac.

Donato glares at her for an instant, then drops his head and claps. There is still time, he tells himself—another period and a half, if this were a hockey game.

But four segments later, before the final Item Up For Bid, he’s still mired in Contestants’ Row. Only one chance remains. The last contestant called down is a blond woman named M’liss, who explains that she was “written after some novel.”

Bob says he likes the name. “How do you feel, Edward?” he asks.

“I like it,” Donato mutters into the microphone, and the audience laughs again. “No, I’m just kidding,” he adds, slightly embarrassed.

“He likes your name, too,” Bob tells M’liss.

Mercifully, Donato beats out contestants Harvey, Marinka, and M’liss for a word processor. He climbs the stairs and crosses himself, just as the host gleefully announces, “The reputation of Harvard is intact!”

But once onstage, Donato has to play The Dice Game for a blue Pontiac Sunbird. “I came to Los Angeles by way of Las Vegas,” he tells Bob. “I’m still having nightmares about dice.”

He overestimates the price of the car—though to this day, Donato maintains that he was robbed.

“I want to show you something,” he says, motioning for the tape to be paused. “Now you understand this game, right?”

Essentially, the contestant is given the first number of the car’s price, but from there, he rolls one die for each of the next four numbers in its cost. If the numbers rolled do not match exactly, the contestant must guess “higher” or “lower.”

Donato rolls a two on his first try. He guesses “higher,” assuming the car is over $13,000. He then rolls two consecutive ones, “and those are automatic—those are winners already, right?”

He ends with a three, which is “kind of sketchy, ’cause that’s kind of the middle number between one and six. So this is the one I’m worried about, but you know which one I lose on?”

Turns out, it was the two.

The segment ends with a freeze-frame of Donato, floppy-haired head in hands, but a 75-cent spin on the wheel gets him into The Showcase Showdown, where he bids on a harp, a satellite dish, and a water-ski boat.

To demonstrate the fortitude of the harp—as well as to express its coolness—a model attempts to slice bread by forcing it through the instrument’s strings.

“I was just kind of in la-la land when she was trying to stick a loaf of bread through a harp,” he says in retrospect, “and I haven’t priced a harp in at least a couple lifetimes, so I didn’t know.”

He isn’t even close, and opponent Janella easily outbids him for her Showcase.

“Coach doesn’t strike me as one to be very good with numbers,” Walsh admits now, “so I’m actually not surprised.”

When Janella wins, Donato turns, his hand extended in congratulations to the kindly old lady. “Yes! Yes! Yes!” she shrieks, pointing violently in his face.

“Made me look like a fool,” he says now, shaking his head.

All he could do was return to Harvard, where 50 students turned out at the Kirkland House grille for his 11 a.m. premiere several weeks later.

“We all gathered and huddled around the TV,” remembered Vermont coach Kevin Sneddon ’92 during an interview last year. “Bob was going at him pretty hard the whole time.”

Sneddon recollected M’liss and the mumbling “I like it,” and he also remembered the harp that tripped up his teammate.

“He may have uttered something under his breath, as well, at that point,” Sneddon said. “As in, ‘What the eff?’”

“You know the most depressing part of the whole thing?” Donato asks once the tape has been ejected and his hair and white-washed jeans are mere memories once more.

“You can only go on once. I’ll never get another chance.”

He walks toward the Harvard locker room, through the hall adorned with framed photographs of the Crimson’s glory moments.

There’s a frame up there for Donato, encasing pictures of him in a Crimson sweater, a U.S. team sweater, and an NHL sweater.

“But hey,” he calls over his shoulder. “There’s always the ‘Wheel of Fortune!’”