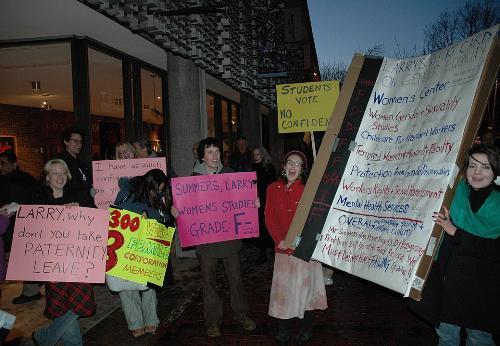 To coincide with a Faculty vote on two motions on University President Lawrence H. Summers’ leadership, a group of 40 students, staff, and alumni from the Coalition for an Anti-Sexist Harvard (CASH) gathered in front of the Science Center and then marched on the Loeb Drama Center yesterday calling for Summers’ resignation.

Wielding a giant “report card” failing Summers in every category of leadership, the rowdy group also surrounded Professor of Anthropology and of African and African and African American Studies J. Lorand Matory ’82 as he issued a statement to the press.

Matory submitted the lack of confidence motion that the Faculty passed—with 218 in favor, 185 opposed, and 18 abstaining—at yesterday’s meeting.

As Summers departed from the Loeb with his police escort, a member of CASH presented the president with a petition calling for his resignation, which had 179 signatures gathered over the last month from people in the Harvard community as well as academics across the country.

CASH leveled nine main criticisms against Summers in its petition, including the low number of female and minority professors in tenured faculty positions and the alleged low pay for Harvard workers.

“We are advocating for a number of issues,” said Sarah K. Howard ’07, who helped organize the protest. “But we are most strongly pushing for a women’s center and greater tenure for women and more diversification among the faculty.”

The group initially met in front of the Science Center at 5:30 p.m. to listen to a speech from Harvard library employee Genevieve Butler, who said that she found the treatment and pay of workers on Harvard’s campus “deplorable”.

“Some women workers’ pay is so low that it is all taken up by child care costs,” Butler said in her speech.

From the Science Center, the group marched through Harvard Square and towards the Loeb Drama Center, where the Faculty had just announced its vote of no confidence against Summers.

“These protests serve to make a public statement,” said third-year graduate student Suvrat Raju. “But they also give you a certain sense of hope that change is possible at Harvard.”