Faculty of Arts and Sciences votes, 218-185-18, to express lack of confidence in Summers 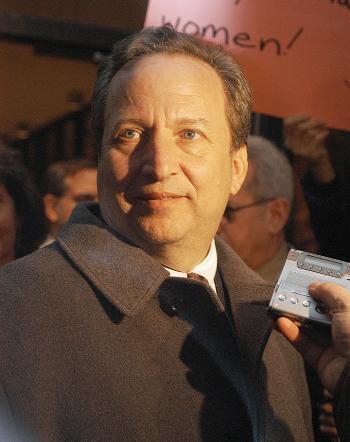 University President Lawrence H. Summers speaks to the media yesterday outside the Loeb Drama Center after the Faculty voted that they lack confidence in his leadership.
By William C. Marra and Sara E. Polsky, Crimson Staff Writerss

In a sharp and unexpected rebuke of University President Lawrence H. Summers, members of the Faculty of Arts and Sciences (FAS) voted yesterday that they lack confidence in his leadership.

Voting by secret ballot in a Faculty meeting at the Loeb Drama Center, 218 faculty members affirmed a motion put on the docket by Professor of Anthropology and of African and African American Studies J. Lorand Matory ’82, stating that “the Faculty lacks confidence in the leadership of Lawrence H. Summers.” One hundred eighty-five voted against and 18 abstained from the motion, which was tantamount to a vote of no confidence.

A second motion, expressing regret for Summers’ Jan. 14 remarks on women in science and certain “aspects of the President’s managerial approach,” also passed the Faculty.

Two hundred fifty-three faculty voted for that motion, which was submitted by Thomas Professor of Government and Sociology Theda Skocpol. One hundred thirty-seven faculty members voted against the motion, and 18 abstained.

The two non-binding motions, unique in Harvard’s history, are largely symbolic gestures—only the Harvard Corporation, the University’s top governing body, can force Summers to step down.

While last month’s Faculty meetings focused on Summers’ adversarial leadership style and his controversial remarks on women in science, yesterday’s discussion leading up to the docketed motions focused instead on what the two votes would mean for the Faculty, and whether the votes should take place.

Debate on the vote of lack of confidence—and a short-lived motion to table Matory’s motion altogether—consumed the first hour of the meeting before Matory’s motion was put to vote shortly after 5 p.m.

Summers was stoic while the FAS docket committee announced that the lack of confidence motion had passed the Faculty, but once the announcement was finished, he covered his mouth with his hand, and his expression soon changed to one of surprise and deep disappointment.

This meeting, the third devoted exclusively to the Summers crisis, drew a packed crowd to the Loeb auditorium, where some professors sat in aisles or stood against the wall once all 556 seats were taken.

The entrance line spilled out onto Brattle Street, mixing with the press and curious onlookers forced to stay outside the much-anticipated meeting.

The Loeb was chosen for its size—the venues of the two previous meetings, the Faculty Room and Lowell Lecture Hall were too small to accommodate the large number of faculty in attendance—but the auditorium lent the meeting a theatrical air.

“This is not theater, albeit it has its comic and tragic elements,” Professor of the History of Science Everett I. Mendelsohn said at the meeting.

The 421 faculty members who voted on Matory’s motion represent over half of the 802 voting members of FAS. Full professors, associate and assistant professors, and a smaller number of administrators and professors who hold appointments in other University schools are allowed to vote at Faculty meetings.

Typical meetings, held once a month in the Faculty room during the school year, draw anywhere between 100 and 150 faculty members.

When the results of the vote of lack of confidence were announced, the room erupted into a buzz of private conversation.

“Honestly, I did not think that the resolution would achieve more than one-third of the votes,” Matory said.

Sociology Department Chair Mary C. Waters, who has been a vocal critic of Summers in recent months, also expressed surprise at yesterday’s result.

“I don’t think any of us expected this to pass. I had no idea that so many faculty support it,” Waters said.

At the end of the meeting, which extended a half-hour beyond the allotted time, Summers made another plea for reconciliation.

“I have done my best these last two months to hear what has been said, to think hard about what has been said, and to make the appropriate adjustments, to learn from what has been said and what’s been done. And I will continue to do that,” Summers said. “My hope would be that this Faculty will now be in a position to move on to address the vital issues that it faces.”

It is still unclear what the future holds for Summers, but immediately after the meeting, many professors said they do not think the president will resign as a result of the votes.

“My guess is that President Summers will not resign,” Mendelsohn said after the meeting.

But even if his job is secure, yesterday’s motions have strong, long-lasting implications for how much power Summers will have in areas of FAS governance.

Professor of Economics Edward L. Glaeser said that Summers is prepared to change his leadership style to accommodate the Faculty. “I have every confidence that the president has heard the Faculty and that he takes this very seriously,” he said.

And Weary Professor of German and Comparative Literature Judith L. Ryan said after the meeting that she thinks the votes will allow the Faculty to flex its muscles more in FAS affairs.

“I think this also gives us a mandate to do more,” said Ryan, noting in particular that the Faculty Council—the 18-member governing board of the FAS, of which she is a member—will now be able to wield greater power.

While some professors talked of amending the relationship between Summers and the Faculty, Matory took a different tack and said after the meeting that Summers should step down as president.

“There is no noble alternative for him but resignation,” Matory said.

Shortly after the meeting began at 4 p.m., Matory introduced his motion to a completely silent audience.

“Twenty years—that is the average length of a Harvard president’s tenure, and that is why our vote today matters,” he said. “If we do not speak clearly, the Corporation and public will believe that we are content.”

Immediately after Matory’s speech, East Asian Languages and Civilizations Department Chair Philip A. Kuhn introduced a motion to table Matory’s motion indefinitely, urging Faculty members to devote their attention instead to discussions of the curricular review and other issues facing FAS.

“The motion just proposed is needlessly divisive,” Kuhn said. “What we need at this point in not division but cohesion. We need not extremes, but middle ground that will let us go forward.”

Professors debated both motions until approximately 5 p.m., when the Faculty rejected Kuhn’s motion to table by a close voice vote.

Several professors who spoke said that it was important that the Faculty vote on Matory’s motion so that they could clear the air and ultimately put the issue behind them.

“It would seem unwise to detour this motion by parliamentary maneuver. It or a ghostly incarnation would come back and leave us no peace. Whether the motion passes or fails, it is important to face and not deflect it,” English and American Literature and Language Department Chair James Engell said.

Faculty members filled out ballots handed out before the meeting and deposited them into boxes that were circulated by members of the docket committee.

While the docket committee left the room to count the votes, Skocpol presented her censure motion to the Faculty.

She said her motion is a signal that professors are “looking for real changes...not simply the statement of intent to change things.”

Some professors spoke against both motions, saying that they represent an attempt to stifle discourse and debate in what should be an atmosphere of academic freedom.

“Academic freedom is on trial, and...a victory for President Summers’ critics will be a very significant blow to academic freedom in American higher education,” said Winthrop Professor of History Stephan Thernstrom, who likened criticism of Summers to McCarthy-era tactics of suppressing free speech.

And Professor of Yiddish Literature and Professor of Comparative Literature Ruth R. Wisse quoted extensively from John Stuart Mill’s On Liberty, in which the 19th-century philosopher defends the freedom of speech.

But Dillon Professor of the Civilization of France and Professor of Comparative Literature Susan R. Suleiman rejected Thernstrom and Wisse’s argument that Summers’ critics were silencing free speech.

“The one thing that really pushes my buttons is when people try to paint every legitimate action as a form of political correctness. I really find that that is a blunt instrument and that is McCarthyite tactics,” she said, provoking applause from many faculty members.