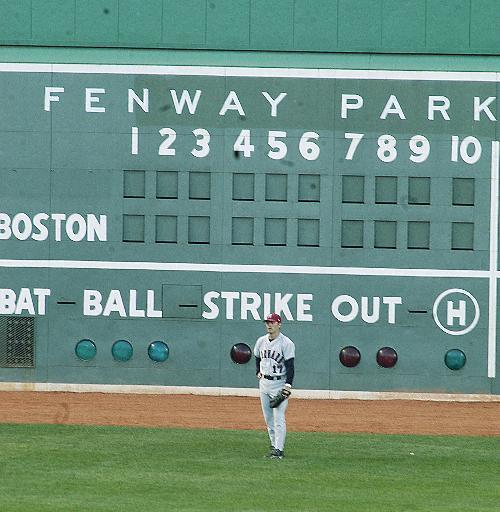 It was the first collegiate start for Brown, a sophomore who made 12 appearances out of the bullpen last season. Tossing five strong innings, the righthander allowed only four hits and two runs, both of which came on a moon-shot home run by Northeastern catcher Dan Milano in the second inning.

The only obstacle between Milano’s blast and Lansdowne Street was the 25-foot Coca-Cola bottle suspended from one of the Green Monster’s light towers—but “other than that one pitch that the kid hit just a little bit over the wall,” Walsh said with a smile, “it was a great performance.”

And Brown had a cushion before he even set foot on the mound. It took Harvard (19-10) just two outs in the top of the first inning to claim the lead, when freshman Matt Vance sent a line-hugging double into the left-field corner, advanced to third on a groundout, and then scored on a sacrifice fly by junior Josh Klimkiewicz. Rookie Steffan Wilson—who had taken first with a pitch to the helmet and advanced to second on Klimkiewicz’s fly-out—scored on captain Schuyler Mann’s single to left, and the Crimson took the field in the bottom of the first with a 2-0 lead.

“[Vance’s] double in the gap really got us going a little big, [got] the offense going,” Walsh said. “It was great to jump out earlier, too. It makes it a lot easier—you can be aggressive on the bases and do a few things.”

Five different Harvard runners—three of whom would go on to score—stole second base during the game. The Crimson upped its lead to 3-0 in the second inning when shortstop Morgan Brown drew a two-out walk, pilfered second, and then ran home on a bloop single by Vance.

Vance reached base in all of his first four at-bats—he earned a single, a double, a walk, and a trip to first after being hit by a pitch—and it was only in the eighth inning that the Huskies (13-16) solved the rookie, retiring him on a groundball to the Northeastern shortstop.

“True leadoff guy,” Walsh said of his rookie. “[He’s] getting deep in the counts, he’s battling with two strikes, he’s stealing bags out there. I’d like to be hitting behind him.”

And while Milano’s home run cut Harvard’s lead to 3-2, the Crimson would tack on a run in three of the next four innings, broadening the gap to 6-2 with five hits, four walks, and a hit-by-pitch.

“We really stepped it up,” Vance said. “It was nice to see everybody hitting today.”

Though with Jason Brown on the mound for five innings, Harvard’s offensive output was more than enough.

According to Vance, the decision to start the sophomore hurler was nearly last-minute—“my heart was beating when coach Walsh told me,” Brown admitted—but Walsh’s decision bore dividends.

Brown deemed his curveball his “go-to pitch” for first-ball strikes, explaining that Northeastern hitters “laid off it all the time.”

And even in the bottom of the fifth inning, when two walks sandwiched a Huskies double and loaded the bases for Brown, the pitcher came through with a fastball for the inning-ending strikeout.

“That was big right there,” Walsh said. “That was a ‘By-You’ fastball, a Louisiana special right there.”

Each team struck once more to push the score to 7-3, a margin finalized when Wilson gobbled up a grounder at third base and heaved it to first for the final out. Then, Harvard players stormed the Fenway infield.

The Crimson shared the prize with UMass by technicality in 1998—the final game was rained out—but last night’s drubbing of the Huskies marked Walsh’s first out-and-out championship in 10 years of coaching.

Harvard outhit the Huskies by a 10-5 margin, outscored them 7-3, and outran them on the basepaths all night long.

Said Walsh simply, “We were able to play our game today.”