Oresteia: ‘A Harvest of Much’ Talent 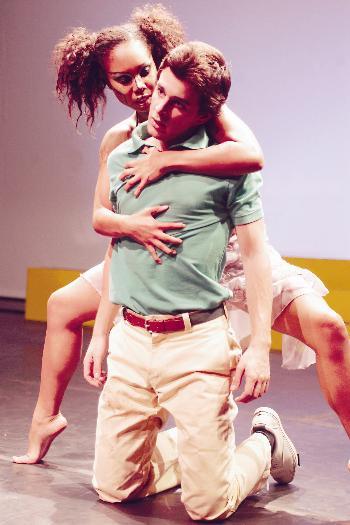 Lauren L. Jackson ’07 and Michael B. Hoagland ’07 perform as the Leader fo the Furies and Orestes, respectively, in Oresteia.
By Patrick D. Blanchfield, Crimson Staff Writer

The HRDC Mainstage production of Aeschylus’ “The Oresteia” is an ambitious effort marked by superb acting, professional-grade production values, and gripping moments of brilliance. It is a cut above this year’s other Mainstage productions, and what criticism can be made of it can only be mounted with considerable qualification: “The Oresteia” aims substantially higher than it achieves, but what it does achieve is far above typical college theater in general—and Mainstage fare, in particular.

The acting in “The Oresteia” is excellent. Jack E. Fishburn’s ’08 Agamemnon is riveting in his tortured grandeur; his rage and despair tears through the scenery. As Clytemnestra, Erica R. Lipez ’05 swings plausibly from vengeance-crazed virago to shrill housewife (one of the production’s conceits is the coy use of Americana nuclear-family trappings). Lauren L. Jackson ’07, as the Leader of the Furies, exudes menace and dances wonderfully; Scottie Thompson ’05, as the doomed Trojan seer Cassandra, is eerie and compelling. Sara L. Bartel ’06 knows how to tug heartstrings while also conjuring a fatalistic dignity as the young Iphigenia, and the scene in which her father sacrifices her is legitimately horrifying.

The excellence reaches beyond the lead performances. Michael B. Hoagland ’07 convincingly expands his range to include perverse bloodlust as Orestes, though Carla M. Borras ’05 re-deploys her penchant for the shrill as his sister Elektra. In fact, Borras strikes an incredibly emotional chord in addressing, in her Yorick-style, the head of her slain stepfather; however, despite her wit elsewhere, Borras really could ratchet down the decibel level and spread her laudable energy a little more thinly.

Bobby A. Hodgson ’05 does a capital job both as the God Apollo, and, with more stage-time, as a nameless ‘Old Man’ (a well-characterized interlocutor for the other characters), while the ever-nimble, well-toned, and intense Liam R. Martin ’06 turns in an excellent performance as Aegisthus; Mary E. Birnbaum ’07 does an admirable job filling a pair of different, lesser roles.

The production values behind “The Oresteia” are likewise superb. The incredibly talented Rebecca J. Alaly `05 has crafted a stylized and brilliant choreography like no other seen on the Mainstage: the first two dances of the Furies, in which disjointed, jerky movements alternated with moments of sensuous synchrony, were breathtaking. Melissa E. Goldman’s ’06 impressive, surreal set accommodates all that it needs to while accommodating tremendous amounts of dirt besides; while Thomas E. Osborne’s ’08 light design is alternately eerie and awe-inspiring (the illumination of the entire backdrop against actor silhouettes is incredible).

Likewise, Jess R. Burkle’s ’06 video design (though it occasionally upstages dancers) and Casey M. Lurtz’s ’07 incredible costumes do wonders for the ambience. Finally, kudos to Simon E. Chin ’05, the production’s dramaturg, for condensing Aesychlus’ trilogy and other works of the cycle into a whole that, though fast-paced and at times elliptical, functions dramatically within time constraints.

But while “The Oresteia” excels on all these individual fronts, it, at times, fails to gel as a whole, developed intellectual statement. The play’s second act is vastly superior to the first, with many of the initial directorial choices (particularly those involving the use of projected home videos) making little sense and providing considerable frustration until the second act.

Above all, however, “The Oresteia” left audiences with the sense that they were witnessing the echo of an ART (American Repertory Theater) show proper: the juxtaposition of a classical text with zany costumes, video projections, moments of kookiness, and po-mo poignancy were served up in proportions roughly equal to what one pays ten times the price to witness during the ART season (think: Highway Ulysses).

This combination, however, does not guarantee success, and poses far more too-open questions than it gestures to answer. Indeed, the intellectual goal of the play—to re-explore the horrific violence of Orestes’ crime and the tragedies that precipitated it, to “allow the Furies to rise up in flames and present their case one more time”—though spelled out in the playbill, was sadly underdeveloped.

Apart from dancing during interludes and appearing during bookend sequences, the Furies (or more precisely, Jackson, as the lone dancer) were not even an offstage presence—the play would have been a much better constructed thematic unit had their presence been consistent and looming. Nonetheless, it is a comment on both this production and the ART itself that the former could gravitate so close to the latter.

“The Oresteia” is excellent, experimental, wildly ambitious theater, and its like should be encouraged—ambition like this is not a fault. A word to the HRDC, which, like a parish church, distributed collection envelopes in “The Oresteia” Playbill: put politics aside, please embrace the cutting-edge, and take risks. More of the same of this sort is good. (Similar attempts at experimentation should be more encouraged)

Michael M. Donahue ’05 is among the best, if he is not the best, director currently working on campus. Over the past years, his work has taken on its own contours and has been marked by signature elements that are regularly deployed: dominant female villains, forays into violence and physical comedy, and the deployment of actors into elaborate, atmospheric sets that enhance the bleak spaces that separate them emotionally. Though some of his tropes can be grating—the alternations between loud yelling, electronica, and animalistic sexuality has grown somewhat predictable—we have all witnessed in Donahue’s work the genesis of a style, and the preliminary efforts of a professional talent of whom we will no doubt hear again.

But it would be unfair to speak in such terms without at last turning my critical lens upon myself. Ambrose Bierce once defined a critic as “a person who boasts himself hard to please because nobody tries to please him”. In my tenure as a reviewer, I have been pleased many times, infuriated only once, and have been consistently impressed by the talent and efforts of the Harvard theater community. I hope my work has done them justice, and that my standards have been fair. I would also like to reiterate my gratitude to my readers. We all—as will the talents behind “The Oresteia”—have tremendous things to look forward to. But regardless of our futures, our valedictions should be tempered by an awareness that we have much to be proud of here and now.