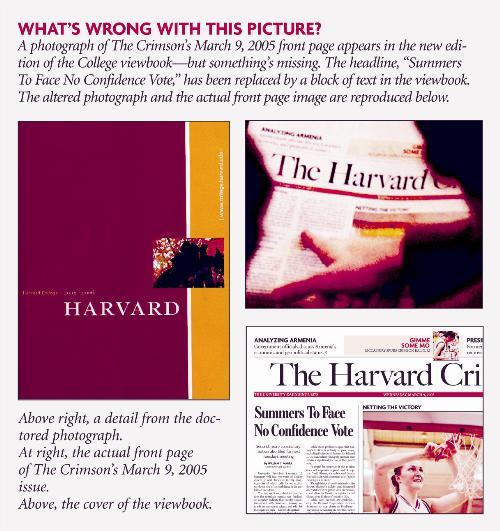 It was a semester of bad headlines for University President Lawrence H. Summers, but nothing a little Photoshop couldn’t fix.

The new edition of the Harvard College viewbook, the official brochure sent to prospective applicants around the world, features a doctored photo of The Harvard Crimson’s March 9, 2005 front page. The top headline of the day, “Summers To Face No Confidence Vote,” was replaced by an illegible block of text.

Dean of Admissions and Financial Aid William R. Fitzsimmons ’67 was taken aback when he was first told of the altered photo last week by a Crimson reporter.

“I’m every bit as surprised as you,” he said. “Obviously it’s sitting here with a Harvard Crimson masthead and [the replaced headline] would be, you know, pretty obvious to anyone who’s connected to The Crimson or anybody who is an undergraduate really.”

Fitzsimmons later confirmed that someone involved with the production of the viewbook had decided to remove the headline, and reiterated that he was surprised by the inclusion of the peculiar photo.

“It’s a mistake, and it should not have happened. And it won’t happen again,” Fitzsimmons said.

Between 135,000 and 150,000 copies of the viewbook have already been printed, Fitzsimmons said. He said the photo will be replaced in future editions.

The viewbook is jointly produced with Boston-based communications firm Sametz Blackstone Associates. Sametz has worked with the admissions office for several years, according to Fitzsimmons.

“We were asked to make that change,” Michael Eads, director of production for the viewbook at Sametz, said last week. Eads declined to elaborate and did not respond to further requests for comment.

The photo appears next to a listing of extracurricular activities on page 24 of the viewbook. Byerly Hall had hoped to include a photo of The Crimson’s newsroom but could not make proper arrangements to do so, Fitzsimmons said. The photograph of students examining the front page was then substituted, but the troublesome headline went unnoticed until close to deadline, according to the dean.

Fitzsimmons said that he has since been told that the decision to run the doctored photo was a collaborative one, made under deadline pressure.

“It was really a joint decision by Byerly and by Sametz to make the change. The responsibility really does lie in both places,” Fitzsimmons said.

“What they should have done is either not included the picture or taken another picture,” he added.

No Harvard employees have been disciplined in relation to the matter, Fitzsimmons said. He said he assumed that Byerly Hall will continue to work with Sametz.

The College viewbook is mailed to prospective students, guidance counselors, and secondary schools, and distributed at information sessions on campus and around the country.

The brochure includes application instructions and materials for prospective applicants.