From Liability to Lock 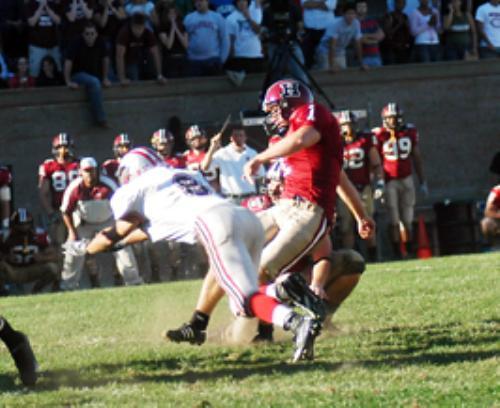 Sophomore kicker Matt Schindel made all three of his field-goal attempts, including the 29-yard game-winner in the second overtime. He also nailed the extra point to tie the game at 32 as time ran out.
By Timothy J. Mcginn, Crimson Staff Writer

There was a time not too long ago when Harvard coach Tim Murphy would likely have had nightmares about the scenario he faced late Saturday afternoon. Time running out in the fourth quarter, down by one following yet another improbable comeback touchdown drive, the fate of the Crimson’s young season now resting precariously on the foot of its placekicker.

And who could blame him? Anyone with Murphy’s track record—from the accurately but unfortunately named Anders Blewett ’03 to hapless senior Jim Morocco, no longer on the team—would be hard-pressed not to shudder, if only from force of habit, at the thought of his special teams unit trudging out onto the field for a game-deciding kick.

But did Murphy even consider leaving the offense that had just moved the ball 82 yards in 13 plays on the field?

Schindel, the sophomore kicker who earned a first-team All-Ivy nod in his rookie season a year ago, has been a revelation during his 12-game career in his own right, but even more so in contrast to his mediocre predecessors, whom Murphy often didn’t trust to convert a chip-shot field-goal try in the closing moments of a three-touchdown game.

Now? Murphy counts on Schindel to kick those. His career field goal conversion rate—a hair under 81 percent, and nearly 45 percent better than his predecessors posted in 2003—guarantees that. But Murphy had never asked Schindel to save or win a game for him and, by his own admission, Schindel had never attempted so weighty a kick before. At least not in his collegiate career.

“My first game in J.V. sophomore year I kicked a 28-yard field goal in a 0-0 tie,” he said. “And then my senior year, I had two overtime field goals, but obviously those are nothing like this.”

But, as expected, Schindel affirmed his coach’s faith and was equal to the task, coolly knocking down the pressure-packed extra point with 15 seconds to play before adding a pair of treys—his second and third of the game—to provide all six of Harvard’s overtime points.

“The extra point was, by far [the most nerve-wracking],” Schindel said. “None of the other kicks had any pressure. But the extra point, if I miss that, then [my teammates] kill me. It was probably my worst kick of the day, too. It’s not that I was scared, but I definitely didn’t attack that ball, whereas in overtime you saw the ball was nice and high.”

Brown kicker and defending Ivy Rookie of the Year Steve Morgan wasn’t so fortunate. Though he appeared to have an early edge in the head-to-head matchup of the Ancient Eight’s preeminent kickers—Schindel’s dad even flew in from California to see the two square off—with four field goals and two extra points in regulation, it was his miscues that ultimately opened the door for the Crimson and Schindel.

Early in the first quarter, with the Bears already ahead 7-0, Morgan left a 46-yard field goal short. Minutes later, following Brown’s second touchdown, he pushed his extra-point try wide for the first missed PAT of his career. At the time, the two misses scarcely mattered. The Bears’ offense was on cruise control with 16 points to its credit already and many more likely to soon follow.

But as Harvard marched the length of the field in the game’s closing moments, only seven points standing between the two sides and overtime, the four points Morgan had left unclaimed loomed large. So it was last year, too, when the Crimson escaped from Providence with a 35-34 victory—made possible, in part, by Morgan’s two missed field goals, including the potential game winner from 30 yards with 1:29 to play.

But it was Schindel’s. And even before his final kick—the 29-yard clincher in the second overtime—soared between the goal posts, Schindel raised his arms outward in celebration, gliding the length of the field before piling atop senior punter Mike King while the two were themselves swallowed in a pile of Crimson jerseys. Not a bad outcome for a player whose position usually draws attention only when the kick doesn’t split the uprights.