Students to serve as baristas and managers of Lamont Cafe 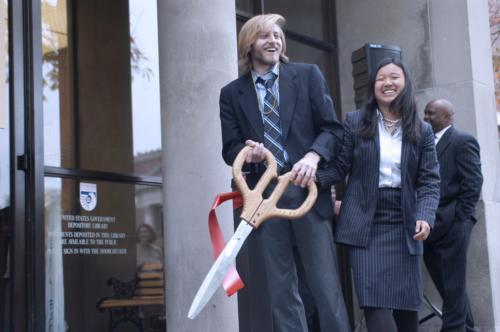 A year after the “dessert riot” that lured approximately 1,500 undergraduates to Lamont for free food from Felipe’s and Finale, librarians prepped for another free food free-for-all by staggering the times that undergraduates could tour the Lamont Library Cafe, which opened yesterday.

Though about 150 students came to sample the free espressos, cafes au lait, eclairs, fruit kebabs, and chicken salad wraps that Harvard University Dining Services (HUDS) employees offered to students and administrators, the event did not attract the crowds that left several hundred students out, hungry, in the cold at last year’s run on Lamont.

“We weren’t sure how many of you to expect,” Larsen Librarian of Harvard College Nancy M. Cline told a crowd of students who stood outside the library to hear her opening remarks and to watch Undergraduate Council members and Librarian of the Lamont Library Heather E. Cole cut the ceremonial ribbon. Following the ceremony, students filtered inside to view the cafe, which is designed to resemble the Lamont reading rooms.

The cafe will serve food from 3pm to 2am Sunday through Thursday, and from 3pm to closing time on Friday and Saturday. However, the cafe space will be open whenever the library is open, with vending machines available to students at all times.

HUDS has hired students to work as the cafe’s baristas and managers under the leadership of a HUDS supervisor. “The day-to-day operation of [the cafe] will be entirely student-run,” said Crista Martin, HUDS’ assistant marketing director. “This is a great experience for students at running a business that’s devoted to their community.”

Student reaction to the new cafe was almost overwhelmingly positive. With the new cafe, “people won’t have to sneak food in,” Jennifer Yan ’09 said. Ari R. Hoffman ’10 sat down to read a book almost immediately after the cafe opened. “I like how it continues the feel of the library,” he said.

“I’m excited about the cafe because usually when I study late in Lamont I get hungry, but I’m too lazy to go out in the Square and get something,” Chinh H. Vo ’09 said.

The original idea for a cafe in Lamont came from University Hall administrators in the spring of 2005. The funding for the cafe came in part from a grant from former University President Lawrence H. Summers, whose office gave millions of dollars to the College in September 2005 to fund social space renovations. Construction on the cafe took place over the summer.

Now that Lamont includes a social space, some have suggested that it will serve as an unofficial student center.

“I think people have been saying that for years and in a way, that’s awkward,” Cole said, noting that Lamont lacks the type of entertainment options that usually characterize a student center. “But I think people make of Lamont what they need to,” she added.

Though the studious may now have an excuse to never leave the library, Beth S. Brainard, director of communications for the Harvard College Library, did not hesitate when asked about the possibility of the ultimate in late-night Lamont luxury—cots.

“Comfy chairs are about as far as I think we’ll go,” she said.

—Staff writer Brittney L. Moraski can be reached at bmoraski@fas.harvard.edu.