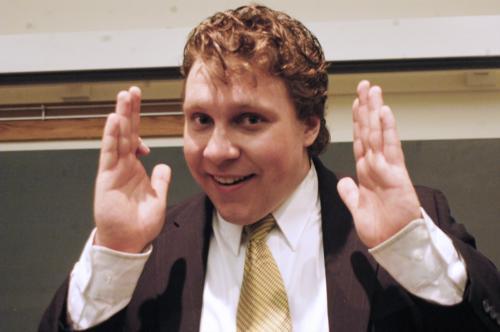 Brian S. Gillis ’07-’08 says he doesn’t think he’ll win the Undergraduate Council (UC) election. In fact, he’s not after votes—foremost, he wants his voice to be heard.

The likelihood of winning the election is “one in 100...to the second power,” Gillis says, echoing his statements from the UC debate. “I have a lot of crackpot ideas and hopefully one of them will actually stick.”

Gillis says his candidacy offers a platform to promote his blueprint for a restructured student government with more specialized branches and non-elected members.

“I’m going to be realistic­—this election is really between Tom and Ryan,” he says, referring to the Hadfield-Goldenberg and Petersen-Sundquist tickets.

Gillis’ “UC Reform Act,” which is the basis of his election platform, calls for reducing what he sees as the bureaucratic parliamentary system of the UC.

“Currently we have a system where politicians and advocates have to be administrators and bureaucrats. This, among many other problems, is central to why our council-based system is unable to efficiently provide services to the student body,” says Gillis, a Government concentrator and UC representative for Cabot House.

Gillis’ proposed student government would include four branches: a College Events Board to organize social events, a Grants Board to handle its fiscal needs, the Undergraduate Council branch to lobby for student reform, and a Student Government Services (SGS) branch to contract out support for matters such as Web site management.

“The things the UC doesn’t want to do will finally get done in an efficient manner and the UC will be able to focus on what it’s good at: advocating student needs,” says Gillis of his plan for reform.

He explains that a student would head up each individual branch, and while the leader of UC branch would still be called “president,” all chiefs would serve under a chairman of the student government. Gillis also proposes that the Grants Board and SGS branches be composed of appointed—but not necessarily elected—students.

UC members, who tend to get bogged down with policy issues that affect students, don’t efficiently deal with logistical technicalities like finances and communications, he says.

Gillis says his campaign is focused on his proposed overhaul of the council and less on the candidates themselves.

In a move he says is meant to emphasize a focus on UC overhaul, Gillis has served as the primary spokesman for the Gillis-Wimberley campaign. Vice presidential candidate Morgan C. Wimberley ’08 has declined invitations to appear in public.

In response to her no-show at her Crimson interview, Gillis responded that Wimberley had a “non-negotiable academic conflict.” However, Wimberley, who is the only female candidate, was also the only candidate absent from the Nov. 30 debate and has not attended any student group endorsement meetings.

“I was getting help with biology for my midterm,” Wimberley writes in an e-mail, “I ‘got permission’ from my superior running mate to go. Alas. Genes. They confuse me.”

Gillis says that Wimberley, who is also a Government concentrator and Cabot House resident, has supported his platform from the get-go.

“We decided to run together because we’re really good friends and I presented the idea to her and she was really excited about it,” he says.

“More than anything, Brian’s idea to change the UC into a Harvard Student Government is exciting because it brings student governing closer to every Harvard student,” Wimberley writes in a statement submitted to The Crimson.

Gillis’ interest in politics extends beyond the UC. He has dabbled in politics as a member of both the Harvard College Democrats and the Harvard Republican Club, and he also interned for Gov. Arnold Schwarzenegger (R-Calif.) the summer after his freshman year. The terminator even invited him into his “smoking tent,” according to Gillis.

His “Reform Act” was inspired by Government 1521, “Bureaucratic Politics: Government, Economic, Social and Military Organizations”—and he says his proposed paper idea for the course examines the history of UC bureaucracy. Gillis has also studied the student government systems of the University of Pennsylvania, Yale, and Princeton, which have influenced his proposals.

Wimberley adds that their platform of structural changes has deeper implications.

“We are not only about physical reform, we are about what all the other candidates are ‘about,’ too,” she writes. “We just want the UC to be able to get there faster, better—with time, money, and essay-writing, problem-set-pounding, Harvard-life-loving energy to spare.”

IN THEIR OWN WORDS: Click here for the Gillis campaign video on HRTV.