President Says Leading FAS Is ‘Infeasible’; To Step Down June 30 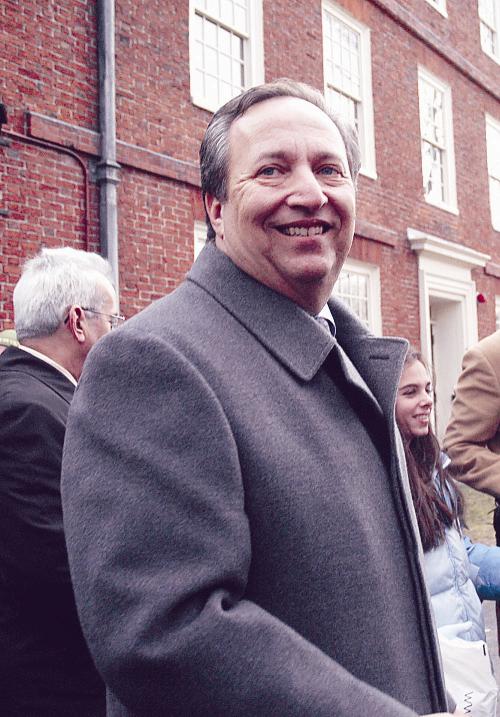 University President Lawrence H. Summers emerged from his office yesterday to speak to a crowd of supporters and members of the media. "This has not been a simple day in my life," Summers began.
By Javier C. Hernandez, Crimson Staff Writer

University President Lawrence H. Summers announced yesterday that he would step down from his post at the end of June, bringing to an end the shortest tenure of a Harvard chief since the Civil War.

Derek C. Bok, who led Harvard from 1971 to 1991, will serve as interim president effective July 1, the University announced.

Summers’ resignation ended his fever-pitched fight with Faculty of Arts and Sciences (FAS) professors—a battle that was headed for a Feb. 28 showdown when the full Faculty was scheduled to consider a motion of no confidence in the president’s leadership.

Two events sparked the most recent round of rancor between Summers and FAS members. First, at the end of January, Faculty Dean William C. Kirby resigned amid reports in The Crimson that he was fired by Summers. Then, at a Feb. 7 meeting of the full Faculty, Summers said he was “not able to make any informed response” to questions about his role in a federal fraud scandal involving his longtime friend, Jones Professor of Economics Andrei Shleifer ’82.

Summers put resignation rumors to rest shortly after 1 p.m. yesterday, when he e-mailed the entire Harvard community to confirm that he would step down and that he plans to return as a professor in 2007.

With that announcement, Summers is set to serve the shortest tenure of any Harvard president since Cornelius C. Felton, Class of 1827, who was named Harvard’s leader in 1860 and died in office two years later.

Yesterday evening, in his first sit-down interview since announcing his resignation, a calm Summers said he had made up his mind last Wednesday to leave Mass. Hall.

“It looked to me like the magnitudes of the rifts with certain segments of the Faculty of Arts and Sciences faculty were at a level where I thought it would be very difficult for us to advance on a whole set of fronts,” Summers said.

Calling the resignation “as difficult a decision that I’ve had to make,” Summers said that he consulted with members of the Harvard Corporation—the University’s highest governing body with the sole authority to fire the president—prior to reaching a conclusion.

“I wasn’t sure at all what the right course was,” he said, adding that he also sought advice from friends, family, and professional colleagues.

By the time he left campus Thursday for a “long-planned” ski vacation in Utah with his family, Summers said he had already reached a final decision.

While Summers had long suffered from frosty relations with some segments of the Faculty, his troubles deepened on Jan. 14 of last year, when he told an academic conference that “issues of intrinsic aptitude” might partly explain the underrepresentation of women in the upper echelons of the science and engineering fields.

That remark touched off an international media frenzy, and on March 15 of last year, Faculty of Arts and Sciences members voted 218-185 to pass a resolution of no confidence in Summers’ leadership.

Even after that vote, Summers hoped he could heal the rift between himself and his Faculty critics, the president said yesterday.

But by this month, “it became clear that that had not been successful,” Summers said.

After enduring an hour-long assault on his leadership at the Faculty meeting this past Feb. 7, Summers said yesterday he initiated contact with Corporation members to discuss “compromise arrangements” that might quell the “clear sense of hostility” within FAS.

After weighing his options, Summers decided that his resignation would be “best for the University.”

In the interview, Summers acknowledged that, for him, “things didn’t click” with the professors who are most active in meetings of the full Faculty.

“I detected much more support from people who said they didn’t come to Faculty meetings,” Summers added.

When asked what one thing he would have done differently in retrospect, Summers said, “I think I would have adapted my style in a way to build more collegial relations with the Faculty of Arts and Sciences group that emerged as my sharpest critics, without compromising on my commitment to strong renewal of what’s happening at the University.”

In an open letter to the Harvard community, Summers said divisions between him and the Faculty made it “infeasible” to advance his goals—namely, the completion of the undergraduate curricular review and the continuing campus expansion in Allston.

He acknowledged that his term had been marked at times by “strains and moments of rancor.”

‘IT WAS MY DECISION’

On a conference call with two dozen reporters yesterday afternoon, Summers sought to quash speculation that Corporation members had forced him to resign. “It was my decision,” he said.

“Harvard’s paths forward will long bear the imprint of his vision,” Houghton added.

Houghton is the only one of the Corporation’s five fellows who served on the board when it first hired Summers in 2001.

The sixth fellow, Patricia A. King, is not scheduled to officially join the board until May.

The historically secretive Corporation reached out to some FAS members in the last 11 months, but several prominent professors outside FAS told The Crimson in the past few days that their opinions were never sought by the board.

In an open letter yesterday, the Corporation members said that the past year had been “difficult and sometimes wrenching” for the University, but they encouraged the Harvard community to “look forward in a spirit of common enterprise.”

Summers will not officially leave his post until June 30, when he embarks on a year-long “period of sabbatical and reflection.” Beginning on July 1, Bok will take the reins after a 15-year hiatus from the University’s top post. Bok is currently the interim director of the Hauser Center for Nonprofit Organizations at the Kennedy School of Government.

Corporation members said in their open letter yesterday that they would commence a search for a long-term president “promptly.”

Summers aims to appoint permanent deans for the Business School and the Graduate School of Education—both of which are now headed by acting chiefs—in the next four months, he said on the conference call.

But he also said he would leave a decision on the Faculty deanship, which Kirby will vacate this summer, to Bok.

Summers will continue to chair Faculty meetings, provided they do not conflict with his schedule, he said. And he added that he will maintain an active role in University fundraising efforts.

Provost Steven E. Hyman, Harvard’s second-highest ranking official, is expected to retain his post, according to the Corporation’s open letter.

Summers wrote in his own open letter yesterday that one of the greatest challenges facing his successor will be uniting the University, particularly in such endeavors as the Allston expansion.

“We cannot maintain pre-eminence in intellectual fields if we remain constrained by artificial boundaries of departments and Schools,” Summers wrote.

Summers plans to return to the ivory tower in the 2007-2008 academic year as a newly minted University professor—a prestigious title now held by only 19 scholars at Harvard. He said he will teach classes and dedicate his research to domestic and international economic policy.

Even as president, Summers has continued in his professorial tasks. He currently leads a weekly freshman seminar on globalization, and last year, he taught a Social Analysis Core course on the same topic.

In 1993, Summers won the John Bates Clark Medal, which is awarded every two years to an American economist under the age of 40 and is considered by some to be a precursor to the Nobel Prize.

Asked yesterday whether a Nobel was on the horizon, Summers replied: “I do research and teaching for their own sake.”

He heads back to the Economics Department with bittersweet memories of his Mass. Hall years.

“There are certainly aspects of this job that I won’t miss, but I’ll miss the opportunity to be involved with the tremendous variety of things that Harvard comprises,” Summers said.

And the president, who may be most familiar to undergraduates as a Diet Coke-clutching visitor at dorm study breaks, still plans to greet students at Dunster House tonight at 9 p.m., according to his spokesman John D. Longbrake.