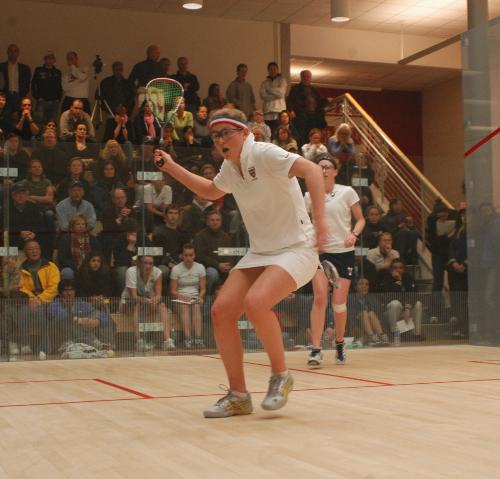 In her match against Yale’s Michelle Quibell, No. 1 Lily Lorentzen was up by two games when Quibell retired to rest her hamstring for the follow day’s match—after the Bulldogs had already clinched the win.
By Lisa Kennelly, Crimson Staff Writer

So much for home-court advantage—and so much for that national championship.

Just days after upsetting top-ranked Yale in New Haven, the Harvard women’s squash team fell to the Bulldogs, 6-3, in the semifinals of the Howe Cup tournament held at the Murr Center.

“I think we were still getting over the climax of having beaten them,” Bajwa said, “while Yale was coming in saying, ‘we should win, we’re the higher ranked team.’”

The Crimson, seeded third in the tournament, defeated No. 4 seed Princeton, 6-3, yesterday to take third place.

Yale went on to beat Trinity, 5-4, in yesterday’s final, giving the Bulldogs their third consecutive national title. Unlike in the past two years, however, Yale doesn’t have an Ivy trophy to accompany its intercollegiate crown.

“Hey, we won the Ivy title,” captain Ally Fast said. “At the beginning of the season we had two goals: first was Ivy title, second was national title. So we’re pleased with the way we did.”

A day after its anticlimactic loss to the Bulldogs, the Crimson seemed primed for a lackluster day. On top of that, Harvard was facing a scrappy Princeton squad that had narrowly lost to Trinity, 5-4, in the semifinals.

But the Crimson’s strength at the top of the ladder was enough to end the weekend with a team victory. Wins at the top four flights—three of them in straight sets—proved to be the advantage against the Tigers.

“I was a little worried after all the hype [Saturday],” Fast said, “about getting up the momentum...but everyone pulled themselves together and played outstanding.”

With Princeton’s No. 1 out with a stomach virus, all the Tigers had to play up a spot on the ladder. Against regular No. 2 Casey Riley, freshman No. 1 Lily Lorentzen had a quick 9-2, 9-5, 9-2 victory.

No match of the entire season had more hype than the Crimson’s semifinal bout with Yale on Saturday: the Ivies’ two best teams, going head-to-head for the second time in four days with a berth in the national title game at stake.

After its 5-4 win over the Bulldogs earlier in the week, Harvard knew it had no margin for error.

And when two of Wednesday’s individual match wins went the other way, the Crimson lost its chance at a second upset.

“Our depth is not as strong as theirs,” Bajwa said.

Junior No. 6 Lydia Williams, who had beaten Kate Rapisarda in four games on Wednesday, dropped a close second game to her Yale counterpart and lost, 9-3, 10-9, 9-4.

“The matches were so tight,” Bajwa said. “Lydia’s match that she won was 3-1 over there. It could have gone the other way, and here it did.”

Lorentzen, who had beaten top-ranked Michelle Quibell in five games on Wednesday, held a two-game lead over the defending Individuals champion when Quibell retired, ceding the match. Bajwa said that Quibell opted not to finish in order to rest her hamstring for the next day’s bout with Trinity’s Vaidehi Reddy—which Quibell would win, 3-1.

Lorentzen and Quibell could likely meet again at next weekend’s Individuals tournament, where Lorentzen will be the top seed.

“I think that one thing that happened [Saturday]—regardless of Michelle’s withdrawal—is that Lily has sent a message that she is there, and she has to be beaten,” Bajwa said.

On Friday, the first day of Howe Cup competition, the Crimson easily defeated No. 6 seed Dartmouth to set up its semifinal bout with Yale.

Harvard won every individual match by a 3-0 margin. The Crimson’s only loss came at No. 9, where Elizabeth Berylson lost in three games.

Harvard’s team season is over, but Lorentzen will be joined by Grigg, Blumberg, and sophomore Supriya Balsekar at Individuals, with Williams and junior Audrey Duboc as alternates.