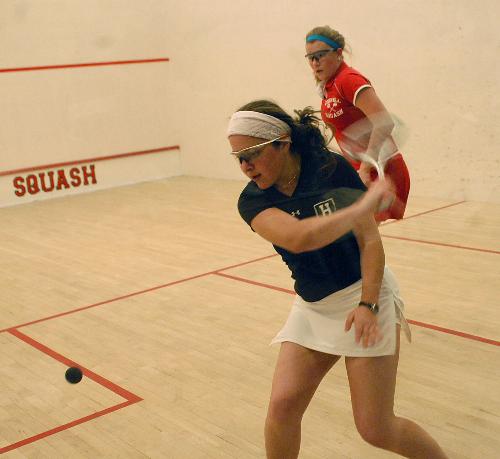 Playing at the number one spot, freshman Lily Lorentzen fell to collegiate No. 8 Larissa Stephenson in a back-and-forth five-game set.
By Lisa Kennelly, Crimson Staff Writer

This was not the best way to kick off the toughest four weeks of the season.

The No. 2 Harvard women’s squash team’s run at a national title unexpectedly stalled on Saturday with a 6-3 loss at No. 3 Trinity. Though the Crimson (4-1, 3-0 Ivy) and the Bantams (5-1) were tied 3-3 midway through the match, Trinity captured the final three matches—including a comeback win at No. 1—to top the visitors.

“We knew they’d be really tough,” said junior No. 5 Audrey Duboc. “It came down to a few matches. It was pretty even.”

Though the Crimson remains undefeated in league play and could get another crack at the Bantams when it hosts the Howe Cup national tournament in March, the loss is cause for concern. While Trinity is unquestionably one of the top teams in the country—before Harvard topped the Bantams twice last season, the Crimson had not beaten its rivals since 2001—the biggest contest for Harvard looked to be a Feb. 22 matchup with defending league and national champion No. 1 Yale.

Stacked with talented veterans and a key newcomer at the No. 1 slot in freshman Lily Lorentzen, the Crimson appeared well equipped for a run at the Ivy and Howe Cup titles. According to Harvard coach Satinder Bajwa, Harvard’s strength at the top two flights—including Lorentzen and junior No. 2 Kyla Grigg, who is ranked second overall in intercollegiate play—would be key to wins over teams like Yale and Trinity.

“With Lily and Kyla, we’re very strong at the top,” Bajwa said in December. “Playing two, it means that we have a sure win between the two of them.”

But on Saturday, both Lorentzen and Grigg fell to their Bantam counterparts. Grigg lost to intercollegiate No. 10 Lauren Polonich in four games, 9-2, 9-5, 7-9, 9-5.

Lorentzen dropped her first game to intercollegiate No. 8 Larissa Stephenson, 9-3, but won the next two by identical 9-4 scores to take a 2-1 lead.

But Stephenson rallied to claim the fourth and fifth games, 9-6 and 9-2.

Despite the Harvard loss, the Ivy title, which is to be decided in dual matches, remained up for grabs.

“It’s good that Trinity’s not an Ivy team,” Duboc said, adding that, “this upcoming weekend is really big.”

The Crimson dropped only one individual match in the first half of its season before facing the Bantams, going 4-0 against Brown, Dartmouth, Cornell, and Williams.

But the second half of the season, always more challenging, will test the 2005-06 squad’s mettle.

The Crimson hosts No. 4 Penn and No. 5 Princeton at home next weekend, both of whom pose a perennial challenge to its Ivy rival.

And with Saturday’s loss, and with the Bulldogs barely escaping with a 5-4 win over Trinity in January, the national title contest has gotten pretty interesting.