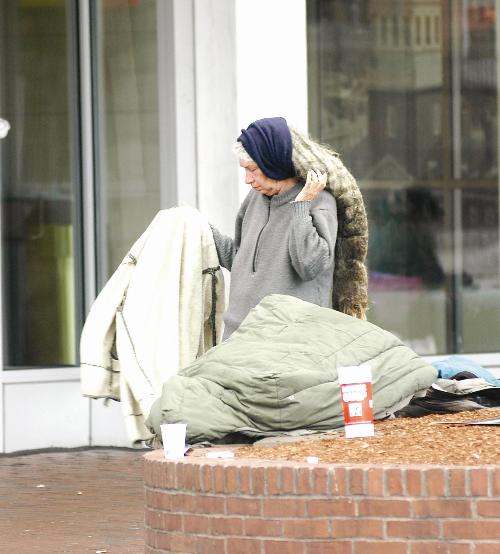 While most Cambridge residents stayed indoors after a snowstorm this past January, others braved the chill to find out how many Cantabrigians were left outside in the cold.

Staff from the Cambridge and Somerville Program for Drug and Alcohol Rehabilitation (CASPAR), which operates Cambridge’s only overnight emergency shelter for those under the influence of drugs and alcohol, conducted the city’s street census for the seventh year in a row.

The census, which combines information from the street count with information supplied by homelessness service providers, counted 445 homeless people in the city, according to results released by city officials last week, for a total of 39 fewer homeless people than last year.

According to results released by the city’s Department for Human Services, the count included 38 families in shelters or transitional programs, and eight inpatients in the Cambridge Hospital. There were also 354 single men and women, 310 of whom were in shelters and transitional housing programs.

Both this year’s census and last year’s were conducted soon after heavy snowstorms hit Cambridge.

A planner for the Cambridge Department of Human Service Programs, Fred Berman, said that the street census does not cover every street in Cambridge, but includes roughly the same route from year to year, adjusted based on where officials expect to find unsheltered homeless individuals.

Berman noted that factors like the weather and the route, as well as sheer chance, make the census an unreliable measure of the true homeless population.

“The count is highly dependent on conditions. Had we done the census two nights before, there would have been more people,” Berman explained. “But since there was snow it was harder to survey and people were harder to get to. So where did those people go? We just don’t really know.”

Assistant City Manager for Human Services Ellen M. Semonoff, also a member of a city committee that published the “Ten-Year Plan to End Homelessness in Cambridge” last year, said that Cambridge continues to conduct the census because the federal government requires it in order for city agencies to receive over two million dollars in annual funding from the U.S. Department of Housing and Urban Development.

Semonoff added that although she would not infer a drop in homelessness from one year’s census data, the appearance of a long-term trend might ultimately be more informative.

“We’d need to have a couple years of a trend in a row before making any conclusions,” Semonoff said.

“It’s an inexact science,” Berman added. “But it’s the best we can do at this point.”

Christina V. Perry ’06, who has been volunteering at the Harvard Square Homeless Shelter since her freshman year, said she has not noticed a significant drop in the number of homeless individuals this past year.

“I think we’ve had as much demand as ever,” Perry said. “There are always more people coming in than we have beds to give out.”

Neither Berman nor Semonoff would tie the census results to new initiatives from the city’s Ten-Year Plan, which proposed a “public education campaign to help residents understand the human side of homelessness” and the construction of more affordable housing units.

“I think it’s premature to think that anything from the Ten-Year Plan is influencing [the number of homeless individuals],” Semonoff said. “But the plan has raised awareness and focused some attention on the need for our community to focus on the chronically homeless.”

Len J. Thomas, director of the Cambridge Multi-Service Center for the Homeless, said that Cambridge has always devoted significant attention to its homeless population. But he added that the effects of the Ten-Year Plan have already begun to show.

“There is a greater emphasis on coordination [of services to aid homeless individuals],” said Thomas.

The center Thomas runs already offers counseling and housing assistance to homeless and nearly-homeless individuals in addition to other services.

”These Ten-Year Plans have really put homelessness on the national agenda,” Thomas said.

“The continuum of care has very little duplicating of services,” Calkins said. “We’ve streamlined the very limited amounts of money that we can access.”

But still, many working to assist the City’s homeless agree that service providers, in attempting to reach out to more homeless citizens, struggle for sorely-needed federal and state funds. And some of the individuals counted in last month’s census are on the streets because they refuse assistance already available to them.

Briefly pausing as he picked soda cans out of trash cans in Harvard Square, Mike—who refused to give his last name—said the census missed him, since he sleeps under a bridge. Although he has been homeless for 11 years, he said he does not need the City’s assistance.

—Staff writer Anna M. Friedman can be reached at amfriedm@fas.harvard.edu