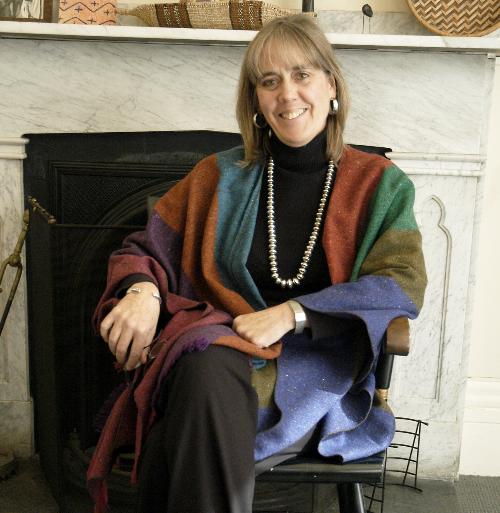 Deborah Foster, senior lecturer in Folklore and Mythology, uses dance and storytelling to explore diverse cultures at Harvard and beyond.
By Zoe M. Savitsky, Contributing Writer

"The body is a tool for knowledge," states Deborah Foster, Senior Lecturer in Folklore & Mythology. A moment later, she adds, “Dance is an underutilized lens for understanding society.”

While far from a summation of her working philosophy, these two pithy statements bring to light Foster’s way of looking at the world: as both a practitioner of dance and as an observer and analyst of the intersections between art, culture, and society.

Foster’s career in the arts began at the age of five when her father signed her up for a modern dance class. As an adult, she studied dance at the University of Wisconsin at Madison, where she began to examine dance through the lens of anthropology. Combining her interests in African culture, dance, and storytelling, she spent a year of her graduate studies doing field research in Kenya.

While abroad, she gained insights that became vital to her future work through things as simple as joining a group of dancers in her village. She vividly remembers the first moment of dancing with them: “I did not understand from the outside what I did from the inside of the dance. I could stand on the outskirts, watching and analyzing, but putting my body in that movement made me think about it from an entirely different angle.”

In her class on body and movement at Harvard, Foster reconstructs this unique physical understanding by having her students learn the dances that they study academically.

In her time abroad, Foster also focused on the importance of gesture and non-verbal communication, finding, among other things, that movement was intrinsically connected to culture. “It became clear that I was an American mover,” she says. I didn’t know how American I was on so many different levels until I lived in society where that wasn’t the way of moving, of being.”

Foster has brought these and many other insights to bear on her work in the classroom and within the larger context of the University. The themes of movement and storytelling find themselves everywhere in her work. She closely relates teaching and art, saying “What makes these disciplines so challenging is that you can’t stay inside. You have to invite someone in, and they have to participate.”

Foster does not see dance, storytelling, or similar forms as unimportant or limited. She highlights the importance of the mode of storytelling to many disciplines, from the law to psychology to journalism. Additionally, she draws clear connections between art and social justice, citing practitioners from Carl Lindahl to Athol Fugard.

In discussing dance at Harvard, Foster describes both her delight in and frustration with the program in all of its manifestations. She speaks enthusiastically about the many different student dance groups, from Irish step groups to the new Pan-African Dance and Drum Ensemble, while also expressing her disappointment in the demise of such programs as the summer course in dance in which she once participated.

Whether moving and speaking Swahili to illustrate the function of vocal and physical gesture in storytelling or describing how scientists and dancers are collaborating to create work about the human genome, Foster provides a significant example of how to fruitfully combine a keen intellect with embodied creativity. And in the end, it’s all about the intersections in teaching and in art: “I give to you when you reach out to me. It’s what happens in the integration of the work and the observer. ”