Renovations to include a seasonal “bubble,” lights, and synthetic turf 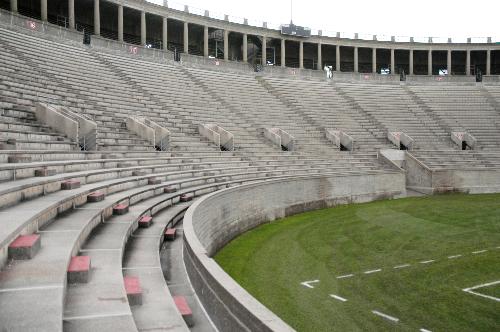 Harvard Stadium may look pretty on a postcard, but outside of football season, it doesn’t get much play.

A series of renovations slated to begin next month will change that, upgrading the 103-year-old National Historic Landmark to a multi-purpose facility available for year-round use by varsity, intramural, and club teams. The planned developments include replacing the grass field with a synthetic surface, installing lights on the stadium’s exterior, and providing for the implementation of a seasonal “bubble.” The project is estimated to cost around $5 million and will be funded by alumni contributions, according to Director of Athletics Robert L. Scalise.

Currently, the football team plays five or six home games on the stadium turf each fall, in addition to a number of practices and exhibition games in spring and summer. Though DHA-clad students are often seen jogging on the steep cement bleachers, the stadium is unused for much of the year.

The new turf, lights, and bubble—which would go up after Thanksgiving and remain until spring—would drastically increase the stadium’s daily and seasonal use, while minimizing the upkeep required by a traditional grass field, say athletic officials.

Work on the stadium would begin next month and be completed in time for the fall 2006 football season, Scalise says.

While the stadium’s stately ivy-covered walls may seem to clash with the white plastic of a winter bubble, the removable structure is likely to be unnoticeable from outside the stadium. The bubble would be fixed to the new turf.

According to Scalise, the fittings for the bubble are one of the largest expenses in the $5 million project.

“But it’s inexpensive if you think you’re getting a 100-yard fieldhouse out of it,” he says.

The bubble will help alleviate an annual space crunch during long Northeast winters, which force the varsity baseball and softball teams to use Lavietes Pavilion or the Palmer Dixon Tennis Courts as practice facilities. Recent upgrades to Palmer Dixon, including the installation of synthetic turf, have helped ease the space problem. But the “winter fieldhouse solution” of the bubble is “one of the things we’re lacking right now,” Scalise says.

Boston College installed a similar bubble on its football field, Alumni Stadium, in 1998 at a cost of $2 million. The facility was the first of its kind in the Boston area and serves as a winter practice field for 10 varsity sports.

NO WAR OVER TURF

The renovation project was approved by the Faculty of Arts and Sciences (FAS) in early December, contingent upon the athletic department’s ability to raise the funds. The fact that the project would require no money from FAS, Scalise says, helped get it off the ground.

Scott A. Abell ’72, the dean for development for FAS, says the office was able to proceed with fundraising quickly by reaching out to specific donors who had expressed interest in supporting an athletics-based project. “We knew exactly who to go to,” Abell says.

“The response was so overwhelmingly positive—that’s partly why it happened so fast,” he adds.

A group of fewer than two dozen alumni donated funds for the project, according to Abell. There is no donor name currently attached to the new facilities, although Abell says they “will eventually recognize the people involved.”

The athletic department also sought the approval of both local and national historic commissions before proceeding with renovation plans. Though the stadium’s status as a National Historic Landmark would only necessitate federal approval if Harvard were using federal funds for the renovations, Scalise says he still found it “prudent” to bring in the historic commissions.

“We like to keep them informed, so people are aware,” he says. “So someone doesn’t wake up and say, what did they do to Harvard Stadium?”

The commissions did ask for a reworking of the original plans of the exterior stadium lighting, the only component of the planned renovations to actually touch the structure itself.

Though officials thought that possible alumni donors might oppose a move away from Harvard’s traditional grass field, they say that objections have been few.

“That concern didn’t really manifest itself as people thought it might,” says Sullivan, the athletic communications director. “Some people say football should be played on grass, forbidding any artificial surface at all, but we really haven’t had the mass outrage.”

A synthetic surface would cost less to maintain and would withstand unpredictable weather. In the 2004 football season, for example, the field never completely recovered from the season opener against Holy Cross, which was played at the tail end of a hurricane.

Sullivan added that the increased popularity of synthetic surfaces at both the professional and college levels bolstered the case for the switch. In the Ivy League, in particular, several schools have recently shifted to artificial turf, including Dartmouth and Princeton this offseason.

LET THERE BE LIGHT

The addition of lights to the stadium will allow for its use until as late as 11 p.m., Scalise says.

This year’s Harvard-Yale game almost ended in an ignominious tie when the game went into three overtimes at the 92-year-old Yale Bowl, which does not have lights. If the game had not ended before sunset, it would have had to be called on account of darkness.

Athletic department officials say that this concern was not a major factor in the planned renovations.

“It was a larger issue, about more use of the space,” says Jeremy Gibson, who oversees buildings and grounds for the athletic department. “So when the sun goes down, it’s still a usable facility.”

Jake Olkkola, manager of recreational services, says that the changes would have an instant impact on intramural sports, particularly from a scheduling perspective.

“It will help ease the scheduling crunch we face each year,” Olkkola says. “It’s more conducive to students’ schedules.”

The proposed renovations have also been met with approval by the varsity teams affected.

Harvard baseball coach Joe Walsh called the addition of the bubble “huge,” saying that the 100-yard winter fieldhouse will not only help his team—which has in the past practiced in the cramped confines of Palmer Dixon or Lavietes—but also his recruiting pitch.

“We’ve got a kid from Florida, two kids from the West Coast, and a kid from Arizona coming in next year,” Walsh says, “and it’s so nice to tell those guys, you know, this is what we’ve got. We’re going to be playing baseball, but it’s going to be indoors.”

“It’s something we’re very excited about, it’s a great way to create space,” says Harvard football coach Tim Murphy, who told his team about the planned developments at the beginning of spring practices several weeks ago. “It will allow Harvard Stadium to be used for much more than just football.”

Michael L. Berg ’07, a member of the football team, says he was looking forward to playing on the synthetic turf.

“It’s a more consistent surface,” Berg says. “With natural grass you never know what you’re going to get.”