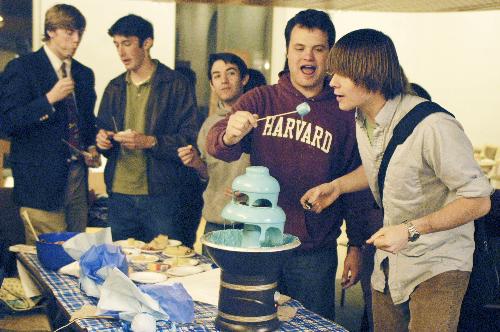 “We are on our way to being an 18th-century European political party—with our paraphernalia, our own propaganda, website, blog, and all this,” Harvard Dems President Eric P. Lesser ’07 declared at Monday night’s launch of the club’s new magazine, The Blue Line.

According to an editor’s note at the front of the unassuming 14-page glossy, the magazine, delivered to dorms last week, is supposed to fall somewhere in between a “serious and stately broadside of the modern campus left” and a collection of “fart jokes.”

The first issue ranges from the wonkish—with an analysis of immigration policy—to the wacky, with a dialogue in which Bob Dole unpredictably recites a freestyle rap.

Several stories are devoted to celebrating the recent achievements of the Harvard Dems.

None of the articles run longer than a few hundred words.

Editor-in-Chief Hayley J. Fink ’08, who volunteered to spearhead the project when it was conceived in late 2005, says the breezy tone of The Blue Line—and its compact size—might attract people who would typically ignore campus politics.

Fink said The Blue Line will fill a niche left vacant by existing outlets like the Perspective, Harvard’s liberal monthly, and the Harvard Political Review.

But it’s not about competition, Fink says, explaining that she’d like to see The Blue Line collaborate with these other publications, not regard then them as rivals.

When Monday night’s launch party reached a size slightly less than that of the Senate Democratic caucus, Fink took center stage and announced the winners of the “First Annual Dem Apples Awards.” (Dem Apples is the official blog of the Harvard Dems). The prizes, naturally, came in the form of apples painted blue. Fink gave out about half a dozen of them, one for “Best Republican-Lite,” for instance, and another for best use of profanity. The latter went to Markus R.T. Kolic ’09 for his invocation of the word “assclown” during a heated liveblogging session.

“I’ll have to wash my mouth out with soap,” he said.

Kolic’s mouth was visibly blue when he came to the front of the room to collect his award. Kolic, rocking sandals with jeans and a sharp grey suit, later explained that he had been enjoying the blue chocolate fountain the Dems had ordered for the party.

After the awards ceremony, Fink raffled off a date with Kavita Narayanadas ’09, one of the six “Lovable Liberals” profiled at the back of the magazine. Narayanadas is reportedly “saving herself for Jon Stewart.”

The winning number was 24; It belonged to Matt T. Bosch ’07, who had coincidentally left the party early to watch the new episode of “24.”

Blue Line photographer Carrie Anderson ’08 won on the second try. Anderson accepted her winnings—a $10 date budget for herself and Narayandas—but afterwards said she had doubts about “how democratic the process was.”

For what it’s worth, Haddock was wearing red.