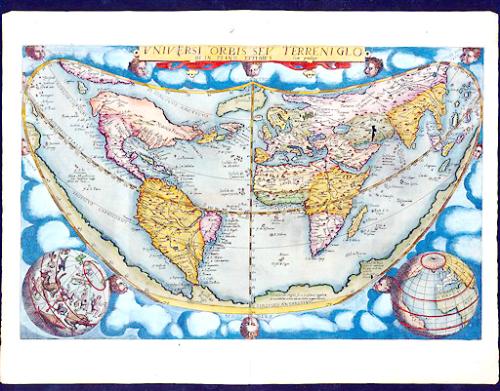 This map of the world, stolen from Yale University, was one of 97 lifted by E. Forbes Smiley III, who pled guilty to the thefts earlier this month.
By Brittney L. Moraski, Crimson Staff Writer

An established map dealer pled guilty on June 22 to stealing 97 antique maps, valued at over $3,000,000, from renowned libraries in the U.S. and England, including eight maps from Harvard’s Houghton Library.

E. Forbes Smiley III’s practice of visiting libraries, cutting maps out of rare books, and selling them to dealers around the world came to an end when he dropped an Exacto knife blade in Yale’s Beinecke Library last June.

According to documents filed by the Department of Justice, the library employee who found the knife became suspicious because such blades are often used to remove and steal pages from rare books.

When she found a man looking at books of rare maps in the reading room, she checked the library’s register and identified the individual as E. Forbes Smiley. An Internet search by the employee found that Smiley was a rare maps dealer, and when a detective confronted Smiley after he left the library, Smiley was found to have several maps in his possession which belonged to the Beinecke.

After Smiley was caught at Yale, libraries including Houghton went through their collections to see if anything was missing. According to Harvard College Library (HCL) Director of Communications Beth Brainard, Houghton Library discovered that 13 maps were missing from their collection. Of those 13 maps, Smiley has admitted to stealing eight, including a map of the new world by Hernan Cortes from 1524.

With his plea deal, Smiley has agreed to serve a five-year prison sentence, according to the New York Times, though he faces up to 10 years imprisonment. He also faces fines of over $1,600,000, and has agreed to pay restitution to dealers and individuals affected by his thefts.

The maps stolen by Smiley from Houghton will be recovered, according to the Justice Department, but the location of the five still-missing and yet-unaccounted-for maps is “a fifty-million dollar question,” according to Brainard.

Connecticut U.S. Attorney Kevin O’Connor, whose office is prosecuting the case against Smiley, said he has no reason to believe that Smiley stole more maps than the 97 that are listed in his plea agreement. O’Connor added that Smiley’s plea agreement does not prevent the Justice Department from prosecuting Smiley in the future, should they learn of other thefts he committed.

HCL will not release information on the five as yet unaccounted-for maps until it receives the Smiley maps after he is sentenced mid-September, Braindard said.

At that time, HCL will list those maps on Web sites where stolen cultural properties are listed. It is “fairly certain” that the five maps are missing, rather than misplaced, Brainard said. “They’ve been removed from the books that they’re a part of,” she said.

Brainard said that the total value of the 13 stolen maps was about $500,000, but she added that it was difficult to put a price on the maps, given their rarity. She also said a rare book that has all of its pieces intact has one value, but once someone—as Smiley did—slices pages out of the book, it loses some of its value. And then there’s the loss to scholarship that results when a book is stolen and is therefore inaccessible to scholars—that cost, Brainard said, can be “immeasurable.”

Houghton has changed its security process in the wake of the Smiley thefts, but Brainard would not go into specifics.

According to Justice Department Public Information Officer Tom Carson, the financial victims of Smiley’s thefts are the individuals—typically dealers—Smiley sold the maps to­. “Often it’s the dealers in the middle who have suffered the majority of the financial loss in the case,” Carson said.

O’Connor said that Smiley was unique because he thoroughly cooperated with the government after his arrest. “I’m not sure absent his cooperation, we’d ever be able to [find all 97 maps],” he said.

—Staff writer Brittney L. Moraski can be reached at bmoraski@fas.harvard.edu.