COMEBACK OF THE YEAR: Bears Collapse For Second Straight Year 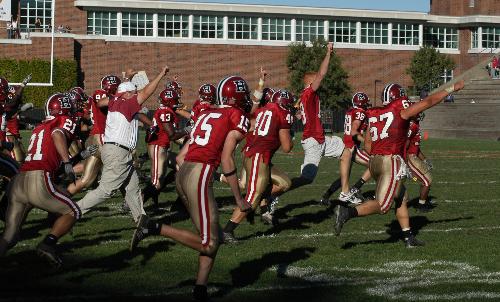 After Matt Schindel hit the game-winning field goal against Brown, the rest of the Crimson rushed the field in celebration of the comeback win.
By Lisa Kennelly, Crimson Staff Writer

How do you top one of the biggest comebacks in Harvard football history?

You take it to overtime. Twice.

On Sept. 24, 2005, one year after the Crimson roared back from a 21-point deficit to defeat Brown in the final seconds, Harvard battled the Bears to a 38-35 double-overtime win at Harvard Stadium.

It was the first double-overtime game in Harvard football history. To get to even one overtime, though, Harvard had to play a familiar game of catch-up.

The Bears, picked to finish third in the Ivy preseason poll—Harvard was projected at No. 2—blazed to a 16-0 lead before the first quarter had ended. Brown scored in three of its first four possessions. Newly minted Harvard starting quarterback Liam O’Hagan was intercepted twice. While the defense tried to keep Brown tailback and eventual Ivy League Player of the Year Nick Hartigan in check, perennial Crimson-killer Jarret Schreck scorched the turf with huge pass plays from Bears quarterback Joe DiGiacomo.

It was not pretty.

“We certainly don’t necessarily, at that early stage in the game, do things the easy way,” Harvard coach Tim Murphy said.

But when it comes to Brown, the Crimson has a way of making comebacks look like cakewalks. Like the year before, Harvard began to launch an assault on its league rivals.

The Crimson opened the second quarter with a pair of touchdown runs by starting tailback Clifton Dawson. Harvard finally pulled even at 22 on a nine-yard scoring catch by receiver Corey Mazza in the third quarter.

In the fourth quarter, the fireworks started.

Harvard took its first lead on a 32-yard field goal by kicker Matt Schindel. Brown answered with Steve Morgan’s fourth field goal of the afternoon, a 26-yarder, and went ahead 32-25 on a 34-yard touchdown pass to Schreck from DiGiacomo with just over four minutes remaining.

O’Hagan took over on his own 18-yard line with 4:03 left and steered the Crimson into Brown territory. With Harvard facing third-and-five on the Bears’ 41-yard line with time running out, the sophomore dashed for a 17-yard gain and a first down to keep the drive alive.

“I started out slowly, made some poor decisions, but I was just trying to get a feel for the game and a feel for the defense,” O’Hagan said. “Once I put the ball in Clifton’s hands, Ryan Tyler, all these great playmakers that we have—once that happened, when I could do that, we marched down the field.”

Another 12-yard run by O’Hagan gave the Crimson 21 seconds to reach the endzone from three yards out, and for a back like Dawson, it was the work of a moment. The junior, who finished with 34 carries for 189 yards and three touchdowns, scored with 15 seconds remaining to send the game to overtime tied at 32.

If the fourth quarter was about Dawson’s and O’Hagan’s feet, the overtimes were about Schindel’s and Morgan’s legs.

Morgan, who had beaten out Schindel for Ivy Rookie of the Year in 2004, matched his Harvard counterpart to end the first overtime tied at 35.

But in the second overtime, Morgan faltered. The leg that had attempted three extra points and six field goals—missing one of each—in addition to five punts, could not send the seventh field goal attempt 42 yards through the uprights.

On the Crimson’s ensuing possession, Schindel sent his 29-yarder straight and true to complete the comeback and send his teammates pouring onto the field.

“It’s tough to beat this feeling,” a beaming Schindel said after the game.

“That was a huge, huge game for us and gave us the confidence we needed for the rest of the season,” captain Erik Grimm said months later, “to know that we could beat anybody.”

It would be the only game that Brown, the eventual Ivy champion, would lose all year. And it would take its place on the long list of legendary Harvard comebacks.

Fans might be well served to mark the time—Sept. 23, 2006—and the place—Providence, R.I.—on their fall calendars.