By defeating No. 1 Yale, Harvard claims Ivy title for first time since 2003 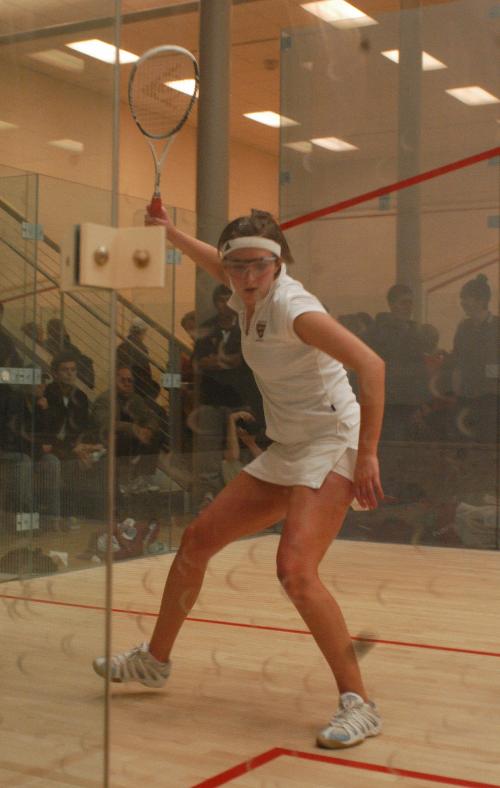 The drive from New Haven to Cambridge takes two to three hours. If you’ve just upset the No. 1 team in the country, the trip seems to go a lot faster.

When the third-ranked Harvard women’s squash team stunned top-ranked Yale, 5-4, on the Bulldogs’ home courts on Feb. 22, the Crimson earned both a joyous ride home and its first Ivy League championship since 2003. Harvard finished with a perfect 6-0 league record.

The Crimson went on to take third at the Howe Cup national tournament, as the Bulldogs exacted revenge with a 6-3 win in the semifinals.

Still, the team was able to reclaim the Ivy crown, its 15th overall.

“Hey, we won the Ivy title,” said captain Allison Fast after the Howe Cup. “At the beginning of the season we had two goals: first was Ivy title, second was national title. So we’re pleased with the way we did.”

With a powerful one-two punch of freshman Lily Lorentzen and junior Kyla Grigg, Harvard was a contender for both the Ivy and national titles throughout the season. The Crimson was ranked No. 2 for most of the year, breezing through the lighter half of the schedule with ease.

After intersession, however, Harvard faced a murderer’s row of Trinity, Penn, Princeton, and Yale, plus the Howe Cup on its home courts at the end of February. The team was confident in its ability to take down the two-time defending champion Bulldogs. But it was third-ranked Trinity that tripped up the Crimson’s undefeated stretch.

On Feb. 4, Trinity surprised visiting Harvard with a 6-3 defeat in Hartford. The loss was concerning not only because it shook up the rankings, but because both Lorentzen and Grigg fell to their Bantam opponents.

The setback, however, proved key in preparation for the Crimson’s road match at Yale. Both Bantam and Bulldog matches always draw noisy crowds of spectators.

“That match [against Trinity] showed us how we had to mentally block out everyone cheering against [us],” Fast said.

So against Yale, it wasn’t the fans who made the difference for the defending champs. Instead, five Harvard wins—including Lorentzen’s five-game thriller over two-time defending Individuals champion Michelle Quibell—sent the Bulldogs to their first loss in almost three years.

“You hear the crowd—it’s obviously there—but you just have to shut it out,” Lorentzen said after the match.

Lorentzen, who was named the Ivy League Player and Rookie of the Year, didn’t have to face Quibell again at Individuals. Her teammate Grigg, who was also named All-Ivy and will be the Crimson’s captain next season, dethroned an injury-weakened Quibell 3-0 in the tournament semifinals.

“I came out this year with more of a revenge feeling,” said Grigg, who had lost to Quibell in 2005’s finals.

Lorentzen defeated her teammate in five games in the all-Harvard final.