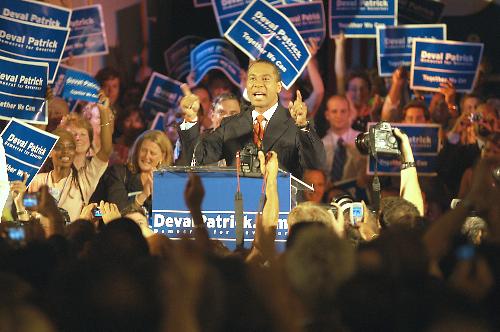 With 98 percent of precincts statewide reporting, Patrick won 50 percent of the vote to Gabrieli’s 27 and Reilly’s 23. Patrick will now race Lieutenant Governor Kerry M. Healey ’82 in November in his effort to end the 16-year Republican hold on the governor’s mansion.

“Not only did we win at the polls, we turned a political campaign into a movement for change,” Patrick said at his victory rally in Boston last night. “I look forward to the coming contest [and] comparing our leadership visions and records.”

If elected in November, Patrick would be the first black governor in state history. The first black candidate to win statewide office was Edward W. Brooke III, a Republican who served as attorney general and later as U.S. Senator. Brooke was the first black member of the Senate since Reconstruction.

A Chicago native, Patrick’s rise from a hardscrabble past—he grew up in poverty but won scholarships to Harvard and served in the White House—endeared him to the state’s liberal Democratic primary electorate. Appointed chief of the Justice Department’s civil rights division during the Clinton administration, Patrick also served as general counsel at both Coca-Cola and Texaco. He was a member of the Harvard Board of Overseers from 1998 to 2003.

Though Patrick won the primary easily, his campaign was considered a long-shot for much of the past 18 months. Reilly, a popular two-term attorney general, began as the frontrunner but stumbled early, bungling the choosing of a running mate on Jan. 30. It was soon discovered that his designee had financial problems, including $12,000 in unpaid taxes.

Patrick capitalized on Reilly’s troubles by locking up two-thirds of the delegates elected at local caucuses on Feb. 4.

“The caucus turned a lot of naysayers into supporters,” Daniel J. Sachs ’07, spokesman for Harvard Students for Deval, said.

“People who would have supported him but thought he had no chance saw the momentum behind him and joined in the campaign.”

With Patrick surging, Gabrieli—who had held out on running for governor on the hope that Reilly would choose him as a running mate—entered the race. A wealthy venture capitalist who had been the 2002 Democratic nominee for lieutenant governor, Gabrieli took to the airwaves and spent over $10 million of his own money on the race. By mid-August, the three candidates were in a statistical dead heat.

But once Patrick began his own advertising blitz in August, and after a strong debate performance at the Kennedy School of Government on Sept. 7, he took the lead in the polls for good.

The race was dominated by economic and fiscal issues, principally job creation and wooing business to Massachusetts.

Patrick drew flak from his rivals for drawing a $350,000 salary for serving on the board of Ameriquest, a subprime lender that had been sued by 49 state attorneys general and had closed nine of its Massachusetts offices. Patrick defended his conduct, saying that he had been joined the board to help broker a settlement.

The candidates also clashed over whether or not to rollback the state income tax to five percent from its current 5.3. Reilly strongly advocated the rollback and Gabrieli advocated a gradual rollback with state revenues permitting, but Patrick opposed the reduction on the grounds that it would force cities to raise property taxes.

Other issues that played a central role in the race were same-sex marriage, the funding of stem cell research, the proposed Cape Wind alternative energy project off of Cape Cod, and charging the children of undocumented immigrants in-state tuition rates at public colleges and universities.

In the race for Secretary of the Commonwealth, William F. Galvin easily defeated newcomer John C. Bonifaz, winning over 80 percent of the vote. The founding director of the National Voting Rights Institute, Bonifaz was among 11 Harvard Law students who sued the school in 1990, alleging race and sex discrimination in its faculty hiring.

At the local level, City Councilor Michael A. Sullivan won the nomination for Middlesex County Clerk of Courts—a position has been held for the last 48 years by his uncle, Edward J. Sullivan—with three-quarters of the vote.

If the younger Sullivan is elected in November and declines to run again for the Council, it will mark the first time since 1936 that no Sullivan sits on the Council.

That year, Michael A. “Mickey the Dude” Sullivan, the grandfather of the current councillor, won a seat, beginning a local political dynasty.

—Staff writer Virginia A. Fisher can be reached at vafisher@fas.harvard.edu.