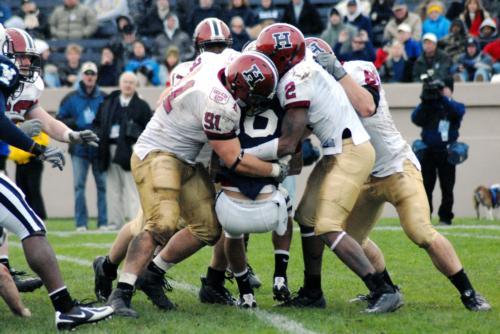 NEW HAVEN—It was never supposed to be this easy.

It was billed as a battle of the Ivy’s best, a clash of the league’s most storied rivals, a contest of historic proportions unmatched in 39 years.

Instead, it was a blowout in the truest sense of the word, a complete manhandling of the home team, on the season’s final day, in front of the biggest crowd—57,248 fans were on hand at the Yale Bowl—either team had seen in 18 years.

The previously undefeated Bulldogs finally fell on Saturday in the 124th edition of The Game as Harvard (8-2, 7-0 Ivy) neutralized the top-ranked rushing attack of No. 11 Yale (9-1, 6-1) and exposed its secondary in a dominating 37-6 win that gave the Crimson its third Ivy League title in seven seasons.

It was the first time since 1968 that both teams entered The Game undefeated in the Ivy League.

The Bulldogs, the wire-to-wire conference favorites who entered The Game looking to complete the first 10-win season in school history, came in sporting the league’s best defense and a running back averaging almost 175 yards per game who hadn’t been held below the century mark all year.

"We dreamed we’d get this result, we didn’t dream we’d get this kind of dominance," said Crimson head coach Tim Murphy. "There’s no question our kids believed they were going to win today, but I’m not sure we saw exactly this coming."

The gameplan consisted of constant Harvard blitzes, whether the Bulldogs were running passing, a strategy that held senior quarterback Matt Polhemus to the worst performance of his career, a 2-of-18 passing day that yielded just 29 yards and as many interceptions as completions.

But Yale’s bread and butter all season was McLeod, whose slowed production the last four games—partly due to a broken right big toe—ground to a near halt on Saturday. His 18-game touchdown scoring streak was snapped in the loss, and the Crimson remains the only Ivy League team against which he has never reached 100 yards.

Harvard scored early and often against the Bulldogs, beginning The Game with a five-play, 69-yard drive that ended with a 40-yard touchdown pass to sophomore wideout Matt Luft. Pizzotti scrambled right on the play, finding Luft wide open for the score behind a Yale secondary that seemed out of place all day. It was the second of Luft’s eight catches and the first of his two touchdowns, and it set the tone in a game in which the Bulldogs never threatened.

"Scoring that quickly just gave us the feeling that, hey, we could do this all day if we do what we’re supposed to do," Luft said. "We have a great defense, so we know they’re not going to score a lot on our defense, so all we had to do was put up enough points, and we felt like we could do that after that first drive."

Luft scored again late in the quarter on a 33-yard pass and run that gave the Crimson a 13-0 advantage following a missed extra point. A fourth-down stop on Yale’s next drive gave Harvard the ball back for an 11-play drive that resulted in a one-yard dive from sophomore tailback Cheng Ho to make the score 20-0.

The Bulldogs’ struggle continued on their next possession, when a high snap forced Yale punter Tom Mante to try to the run for the first down. Mante was tackled deep in Yale territory and, a play later, Pizzotti found sophomore Mike Cook for a 15-yard touchdown that gave the Crimson a 27-0 cushion.

Pizzotti was tremendously sharp in his final game, thanks in large measure to the offensive line’s best performance of the year. The unit completely stymied the Bulldogs defense, which came into The Game limiting opponents to 11.1 points per game, the best in Division I-AA.

"Coach challenged the offensive line last night in our team meeting to come out and really set the tone for our team," Pizzotti said. "They did an unbelievable job, getting every blitz picked up and everything."

A nearly 16-minute Harvard advantage in time of possession prevented Yale from getting into any kind of offensive rhythm, and the Bulldogs defense paid the price, lining up for 35 more plays than Harvard did.

"We really just had no answers offensively," said Yale head coach Jack Siedlecki. "They seemed to be in our backfield every play, whether we were running or throwing. I don’t know how many plays our defense had, but they were out there all day."

And when the team did get on the field, Yale was out of sync, as Polhemus had no success moving the ball after the big lead forced the ball out of McLeod’s hands.

"We probably talked almost exclusively about the passing game at halftime," Siedlecki said. "We were just completely out of what our style has been the whole year, and it’s as simple as that."

The Crimson added a third-quarter field goal and junior tight end Jason Miller caught a touchdown pass early in the fourth to round out the day’s scoring for Harvard. The 37-point output was the team’s highest in almost two years, and the win avenges a 34-13 loss in The Game a year ago. All this was for a Crimson squad that began the year 1-2 before reeling off seven straight wins and an undefeated Ivy slate.

Harvard lost its shutout bid late in the fourth quarter when Bulldogs freshman Gio Christodoulou took a Thomas Hull punt 87 yards for a meaningless score. The margin of victory could have been even greater, too, if not for a four-down, goal-line stand by Yale at the end of the first half.

But special teams adjustments and goal line drills will have to wait—for now, Harvard will celebrate its league crown and say goodbye to seniors whose careers were bookended by Ivy championships.

"I’ve been saying for the past couple of weeks that we hoped it came down to this, and it did," Bagdis said. "This is the ultimate, perfect, storybook ending, so I couldn’t be happier and I couldn’t be prouder of the guys in this senior class. It’s just phenomenal."