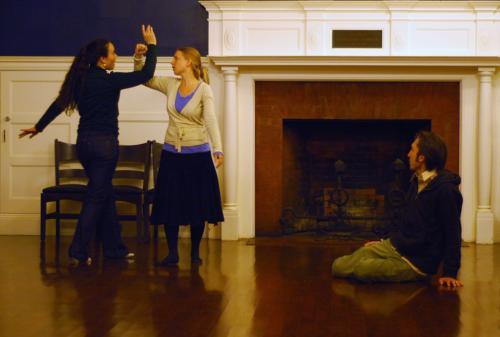 By Daniel B. Howell, Contributing Writer

One Sunday afternoon in the Lowell JCR, eight students in their post-brunch T-shirts and sweats stand in a semi-circle as Matthew J. Hall ’09 tidies his sheet music at the piano.

The Harvard Early Music Society is rehearsing for its biannual opera, Henry Purcell’s 1691 King Arthur, going up at the Agassiz Theatre Nov. 8, 9, and 10 at 8 p.m.

With the exception of Hall, everyone in the JCR looks nervous. Once the piano music starts, the semi-circle launches into a powerful operatic chorus. Impressive, certainly, but hardly unusual for Harvard. And yet the singers continue to exchange sidelong glances.

When they begin to dance, it becomes apparent why.

The bewildered performers have difficulty keeping straight faces as the semi-circle begins to weave through itself. The singers move their hands through a series of unnatural gestures, somehow resembling the dance for “Walk Like an Egyptian.” One girl looks around with uncertainty to make sure she’s not the only one. Indeed, if they weren’t all such gifted musicians, the whole spectacle of interwoven lines of anxious-looking, stiff-limbed undergraduates would risk resembling a scene from a Christopher Guest movie.

“We have to rehearse differently with the singers,” explains stage director Catherine E. Powell ’08. “They have to think more about actually producing the sound. They’re not used to the choreography.”

But in the world of early music, with a baroque repertoire from the 16th, 17th, and 18th centuries, teaching singers to dance is a relatively minor challenge.

A more formidable test for the production might be the script and lyrics John Dryden penned for King Arthur.

“I don’t know what the hell Dryden is talking about half of the time,” says Hall, who is the musical director of the show. “Purcell’s music saves Dryden’s text from being bad.”

As a semi-opera, the show’s main action is spoken, with interpolated musical tableaux called masques. The masques, which rarely advance the plot, are the instances where the show is at its most stylized, impressionistic, and ceremonial. There are pagan sacrifices, pastoral masses, and one spectacular encounter between the evil sorcerer Oswald, Cupid, and the tutelary spirit of the frost.

The set design, which consists of sliding panels that close and open up, approximating an authentic baroque set, allows the production to move between the world of spoken dialogue and the rarified realm of the masques.

The cast and crew speculate that the masques’ focus on the aesthetic and the figurative has allowed them to age more gracefully than the unmusical parts of the script.

“People have to interpret the spoken dialogue as comedic now,” Powell explains. “The plot is ridiculously contrived. Characters confront each other with rhymed couplets before doing battle. It’s too hard to take seriously.”

With the staging, however, Powell has tried to retain many of the stylized gestures popular in theater of the time. With the music, historical fidelity has even higher stakes.

“Baroque composers left a lot of decisions unmade in the written music,” explains Hall. “You have to play the music in an intelligent way in order to bring the piece to life.”

“It’s a kind of controlled improvisation,” says Matthew M. Spellberg ’09, the show’s producer. “It functions sort of the same way jazz does, with these conventional ways to embellish the written music.”

Of course, the way that the music is written is not the only thing that has changed. As always, the Harvard Early Music Society’s production will feature an entire spectrum of unusual instruments, ranging from the relatively common harpsichord (they have two, actually) to the improbable-seeming overgrown lute known as the theorbo. Baroque trumpets, baroque oboes (or “haut-boys”), and baroque bows for string instruments are also present in the ensemble.

“There’s this whole sound vocabulary that’s absent from other music,” Spellberg explains. “The music is more exposed and rawer.”