A Familiar Clash As Faculty Meets 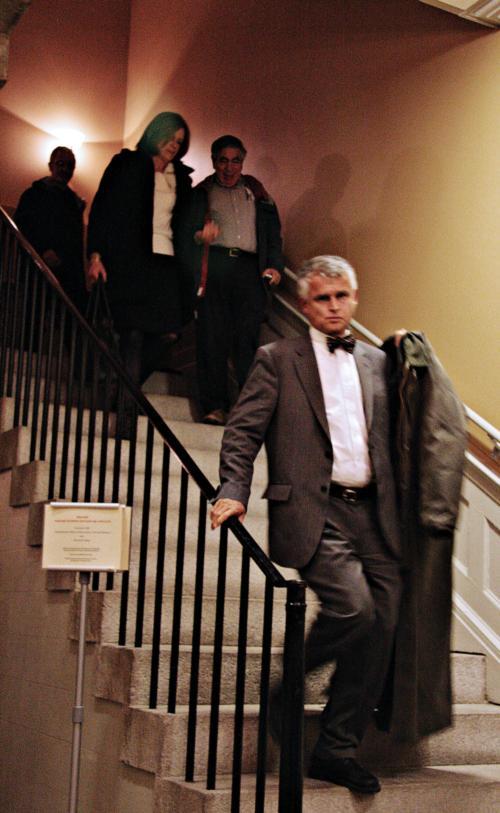 University President Drew G. Faust said yesterday that she will consider creating a committee to investigate free speech at Harvard.

Faust’s announcement at the meeting of the Faculty of Arts and Sciences came in the midst of an ongoing clash between anthropology professor J. Lorand Matory ’82 and law professor Alan M. Dershowitz. Matory has claimed that critics of Israel like himself “tremble in fear” from repercussions for their views and urged his colleagues to pass a one-sentence affirmation of “civil dialogue.”

While that motion was postponed indefinitely yesterday, the debate continued between Matory and Dershowitz over Harvard’s handling of issues that concern Israel and Palestine.

Dershowitz, who told a colleague before the meeting, “I’m here to be silent,” challenged Matory’s characterization of his work relating to the Middle East.

Dershowitz told the professors that a research assistant had identified 54 events held at Harvard with anti-Israel perspectives since the death of Yasser Arafat in 2004.

“There simply is no problem about free speech relating to the Israel-Palestine issue,” Dershowitz said.

Matory disagreed, telling The Crimson after the meeting that “there’s a minority on this campus that does feel intimidated and threatened. People say to me, ‘You’re brave.’”

“The problem seems most acute around anti-Israel positions,” Caton said. “Free speech cannot be only for the toughest skin—a sort of Darwinian struggle for the loudest and vituperative.”

Some professors cautioned against voting down a motion with a seemingly noncontroversial message.

“All of this is what the French might call an exercise in drowning a fish,” French historian Stanley Hoffmann said. “It would be seen as very bizarre in the hinterlands that Harvard has rejected a perfectly sensible motion protecting free speech.”

Several amendments were made to the proposal over the course of the meeting, with the most significant one explicitly disavowing the relation between the motion and Matory’s Sept. 14 editorial in The Crimson, which specifically discussed the Israel-Palestine issue.

However, a number of professors argued that this amendment could not divorce the motion from Matory’s editorial.

“There are words which cannot be unsaid,” said computer science professor Michael O. Rabin. “They are going to be a part of the history of our faculty, part of the history of Harvard, and that would mean that this vote implicitly verifies the fact that there were attacks on people, in this case, who wanted to express controversial opinions on the Israeli-Palestine issues.”

Matory said that the meeting served his intentions “very well” by providing a forum for an open discussion of free speech.

The meeting was bogged down by countless amendments, vote counts, and quibbles over nitty-gritty details of the rules of order. Landscape studies professor John R. Stilgoe quipped, “I’m very happy...we decided not to broadcast these,” referring to the Faculty’s rejection of a proposal to broadcast meetings over radio.