Faust was 'the candidate to beat,' Rudenstine says 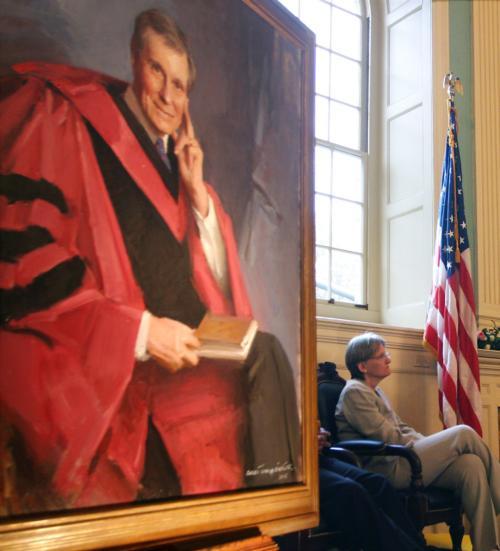 Lincoln Professor of History Drew Gilpin Faust appears as a guest of honor at the unveiling of former University president Neil L. Rudenstine's official portrait on May 2, 2006. Rudenstine was Harvard's 26th president. If approved this weekend, Faust will
By Javier C. Hernandez, Crimson Staff Writer

Former Harvard President Neil L. Rudenstine said in an interview from Puerto Rico Friday evening that he "couldn't be happier" about the choice of Drew Gilpin Faust to be president.

"I think she is a person who can bring other people together and at the same time she has tremendous clarity of vision and she's able to be very, very decisive in her very tactful and very strong way," the former president, who first appointed Faust to be dean of Radcliffe in 2000, said.

Rudenstine said Faust was "the candidate to beat" in the course of the search, even when pitted against provosts and presidents of other prominent institutions.

"She clearly stood out in the group," he said, adding that the pool included other "excellent people."

Rudenstine, a former Princeton provost, said that any dean or provost would encounter difficulties making the transition to leading a large university, and that Faust possesses the necessary skills to govern effectively.

"She understands the institution extremely well," he said. "I think she's widely admired throughout the University."

Rudenstine said he was confident in the ability of Faust, a Civil War historian, to lead the University's expansion into Allston and the school's push for new interdisciplinary science initiatives. Some search committee members had expressed interest in appointing a scientist to the post. Rudenstine, however, said that it was more important that the committee select somebody with "genuine intellectual depth and breadth" like Faust.

Rudenstine said Faust will likely devote the next few months to contemplating two major appointments that are set to be vacant on July 1: the deanships of the Faculty of Arts and Sciences and Harvard Medical School.
—Staff writer Javier C. Hernandez can be reached at jhernand@fas.harvard.edu.