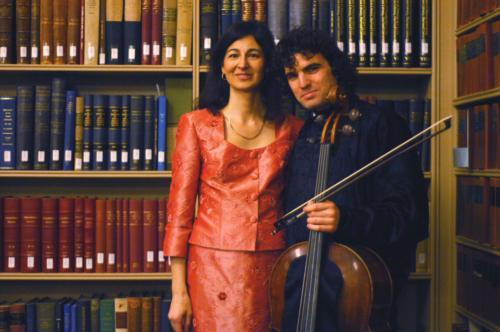 Books became a backdrop Thursday night at Houghton Library, ceding their spotlight to the latest installment in the Library’s Chamber Music Series: “Post-Romantik.”

Like a rendezvous with old friends, cellist Gavriel Lipkind and pianist Claudia Schellenberger effortlessly connected through the musical phrases of composers who were diverse in background and style. Ultimately, the palpable bond between the two well-known German performers made the concert exceptional.

Lipkind punctuated the performance—organized by Fredric W. Wilson, Curator of the Harvard Theatre Collection at Houghton Library—with comments to the audience regarding the genre of the music in the program. In his initial address, Lipkind said, “The goal is to look for moments that are from different points of view that are stuck between the Romantic and the Modern solutions. They don’t completely fit.”

Indeed, the music varied from the thin, attenuated notes delivered in Bohuslav Martinu’s “Variations on a Slovak Theme (1959)” to the pleasingly flamboyant pizzicato of Claude Debussy’s “Sonata for Cello and Piano (1915).”

“Post-Romantik” did result in the marriage of profoundly emotional points, ranging from the raging bass notes of Martinu to the delicate, cradling treatment of the piano notes of César Frank’s “Sonata in A Major (1886).” The “stuck” moments of the music definitely enhanced the emotional depth of Romanticism with modern additions that ushered us into this musical “transition” genre.

Aided by the intimate setting of the Edison and Newman Room, where the performers were framed by rows of folding chairs in a semi-circle, it was evident that there was more to the music than crescendos and legatos. Although Lipkind and Schellenberger were surrounded by shelves upon shelves of old, leather-bound books, the most significant narratives of the evening were made through the resonating notes of the piano and cello.

Lipkind told the story of György Ligeti’s “Sonata for Cello Solo (1948, 1953)” on his 1702 Bolognese violoncello in stylish fashion. The first movement, “Dialogo—Adagio, Rubato, Cantabile (1948),” opened with a pulled string that was vaguely reminiscent of my guitar-tuning days. However, Lipkind executed the note—and the rest of the movement—with confidence and extreme command. The continuation of the music explains how the composer has fallen hopelessly in love and is desperately trying to converse with the woman of his heart. However, as Lipkind jokingly noted, “The piece ends up in more of a dramatic monologue.”

Then, it was as if Ligeti put the situation on hold for several years. He wrote “Capriccio—Presto con Slancio,” the second movement of the piece, in 1953. With an invigorating prestissimo, Lipkind delivered the love-struck composer’s return to reality with notes that flew so quickly from the bow, it was as if a rustling wind blew into the room and ran with the scale.

Schellenberger, too, was poised throughout the program—and entirely in harmony with Lipkind. Her masterful arpeggiated chords in “Sonata for Violin and Piano in A Major (1886)” by Franck would put any other pianist in awe of her abilities. The light treble notes that introduced Debussy’s “Sonata for Cello and Piano (1915)” and the articulated, precisely abrupt rests of Anton Webern’s “Drei Kleine Stücke, Op. 11 (1914)” showed she was at home in front of the grand Steinway.

Not only was the program brimming with the work of late-19th century and early 20th century masters, we were also privy to Lipkind’s brilliant arrangement and transcription work. Lipkind interpreted Alexander Scriabin’s “Romance for Horn and Piano (1890)” magnificently and fluidly, and, as Lipkind put it, delivered the piece “by both transcribing it and rewriting the ending.”

Lipkind also made modifications to Franck’s “Sonata for Violin and Piano in A major (1886).” Regarding the transcriptions that have been written by others, Lipkind expressed his distaste in the difficulty of moving from the register of a violin to that of a cello. He combated this problem by transposing the violin part down several octaves; the end result was flawless.

By the end of the program, I thought the performance could not have been more personally expressive and spiritual. I was wrong. After multiple bows, Lipkind and Schellenberger treated the audience to an encore of a Jewish prayer piece arranged for cello and piano.

“I’ll try to imitate what one can still hear in the synagogue today,” Lipkind said. His words rang true, as it was evident that the sounds coming from his cello were beyond notes; they were ethereal.