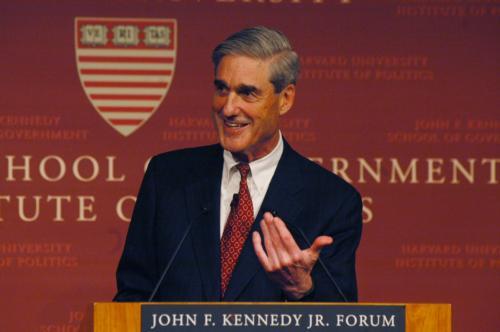 Robert Mueller, Director of the FBI, spoke on civil liberties and national security at the IOP forum yesterday.
By Malcom A. Glenn, Crimson Staff Writer

Mueller, who was set to speak before a full crowd managed by tight security detail, had just begun his prepared remarks when the first protestor interrupted with screams from the second floor.

Just seconds after security escorted the woman out, more shouts resonated from within the audience.

“We will never forget the role of the FBI in McCarthyism!” screamed Michael A. Gould-Wartofsky ’07, who is also a Crimson editorial editor.

Two more students interrupted the speech with protests ranging from “stop the unconstitutional repression of the environment” to “close Guantanamo.”

The student protestors included Gould-Wartofsky, Kelly L. Lee ’07, and J. Claire Provost ’07, who is also a Crimson editor. The fourth student could not be identified.

Mueller said that despite the interruption, he was glad the students lived in a society that allowed them to “express their views.”

“Al-Qaeda is no longer just an organization, it is a movement,” Mueller added. “Its followers may have no formal affiliation with al-Qaeda, but may be inspired by its message of violence.”

The sixth director in the Bureau’s nearly 100-year history, Mueller faced tough questions from many audience members during the evening’s question-and-answer session.

Straus Professor of Business Administration Max H. Bazerman said that he had lost faith in some government officials.

“I trust you,” said Bazerman, “but how do we trust the government when we know they’ve lied to us?”

Vivek G. Ramaswamy ’07 challenged Mueller to address whether it was more pertinent “for there to be some kind of outside check” on the FBI’s role in affecting civil liberties.

“We have to strike that balance day in and day out,” Mueller said. “We do it with substantial input and oversight from Congress, privacy groups, and the ACLU. We should not be protected from scrutiny.”