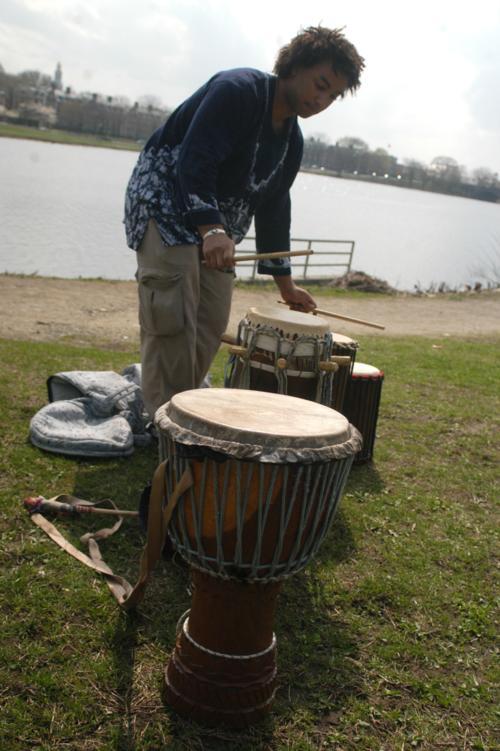 Oludamini D. Ogunnaike ‘07 is always drumming—literally. Though his other media include a djembe, a table, and his knees, Ogunnaike’s most frequent form of artistic expression might simply be tapping out rhythms on the floor with his feet, as he instinctively does throughout our interview.

In addition to his involvement in music, Dam, as friends call him, is a psychology and African studies joint concentrator, a member of Phi Beta Kappa, and a recipient of the prestigious Rockefeller Fellowship, which provides students with funding to travel abroad after graduation.

Ogunnaike grew up in a musical family: his mother studied traditional Yoruba music from West Africa in college and for her master’s degree; his father plays the guitar and sings; and a close family friend, whom he calls an uncle, drums.

Ogunnaike says it was natural for him to start making music of his own.

“I used to sit around and watch my uncle all the time, so I’ve always been banging on stuff, banging on tables, the sink, legs, or even somebody else when I was younger,” he says, drumming his fingers on a bench in Lowell House’s courtyard.

Though he played bass guitar in a blues band in addition to studying piano for eight years, Ogunnaike’s true passion, drumming, developed by chance during his freshman year.

“One of my friends dragged me to a West African dance class, and I was hesitant because I thought it would be for girls, but the instructor was also a drummer,” he said.

The instructor, Sidi Mohammed “Joh” Camara, introduced him to the djembe, a drum traditionally from the Mali area that is now found all over West Africa.

“I was just blown away by the sound of the djembe. It almost sounds like someone is speaking to you, and as soon as I heard it, I knew I needed to learn it,” he said.

He got his own djembe after saving up money from various jobs and started to take lessons with Camara, who teaches at the Harvard Dance Center and is the main instructor of the Pan-African Dance and Music Ensemble (PADAME). Ogunnaike has been studying with him ever since.

Ogunnaike says that he hopes his passion for drumming is infectious.

“When you drum, you make people move,” he says. “It’s almost impossible to sit still when listening to a good drummer.”

In between saying ‘hi’ to students who walked by and offering them a taste of the favorite snack his mother sent from home, Ogunnaike explains his passion for drumming. “Drumming is the root foundation of all music because you have to have rhythm in any music you play,” he says. “Drumming strips away all the extraneous, interesting, and beautiful things like melody and harmony, and is just about when you play the notes and how you play them.”

Ogunnaike will use his Rockefeller Fellowship to go to Mali and study drumming with masters of the art. He is also looking into picking up the Kora, a 21-string harp.

According to Ogunnaike, drumming has influenced several non-musical aspects of his life, from building personal relationships to honing his work ethic.

“West African drumming in particular is polyrhythmic, which is incredible on so many levels because you don’t have to be in lock-step with other musicians,” he says.

“Each one of us has different rhythms, day and night, the seasons. The body has circadian rhythms, and drumming teaches you how to link up all these rhythms in harmonious ways,” he says.

He offers a scenario: “For example, if my roommate likes to go to bed at 11 and I like to go to bed at 2, drumming teaches me how to make these different rhythms fit not just musically, but in real life.”

Drumming has also helped him realize the importance of leading by example.

“When you’re drumming with a group, if you’re the lead drummer, it’s amazing how if you get really into it, everyone else gets into it, and if your mind drifts, the whole group starts to fall apart,” he says.

“Any musical practice sharpens your mind and provides you with mental discipline,” he says. “It’s also an amazing way to blow off stress, and banging on drum is more productive than punching walls or other crazy things.”

Ogunnaike says he hopes that everyone has the opportunity to experience drumming, regardless of musical ability.

“If you say ‘I don’t have rhythm,’ you have a heartbeat, so you do have rhythm, and you can drum.”