From the Battlefield to the Bench 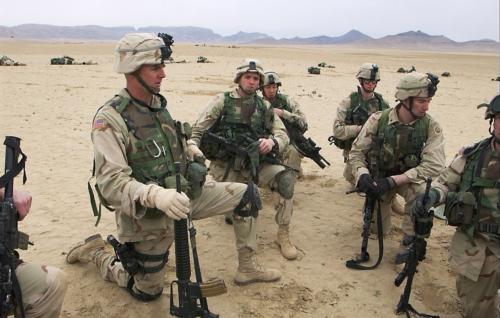 Kevin Kit Parker briefs some soldiers, after they air assaulted into an area on the Afghan-Pakistani border in January 2003. The soldiers are preparing to move in to search a village, while a firefight raged in the mountains above them.
By Nathan C. Strauss, Crimson Staff Writer

On the morning of Sept. 11, 2001, Kevin Kit Parker was driving through a rough neighborhood in Baltimore on his way to the Johns Hopkins bioengineering lab where he worked as a post-doc.

When he heard on the radio that a plane had crashed into the World Trade Center, he immediately knew that it was no accident. By the time he arrived at the lab and the second plane had hit, the Army reservist knew that the country would be going to war. And by the end of the day, the Tennessee native decided that he would do whatever it took to defend his country.

Parker would soon make the decision to switch units within the Army Reserves in order to ensure that he would see immediate action in Afghanistan.

After shipping off in 2002, the 36-year-old biomedical engineer’s academic life would be forever changed as he saw the gruesome sights of the battlefield.

Since returning in 2003, Parker—as well as his colleagues in Pierce Hall—have tailored research to create treatments for war-related injuries.

“You can’t go over there and see someone step on a land mine and then come back here and work on your own problems,” Parker said. “You say, ‘I have to do whatever I can for the guys who are still back there.’”

Despite the looming threat of being called back to serve—Parker said he joined the reserves knowing that “it’s about the sacrifice”—he talks about the transition from the frontline to the lab in an upbeat tone.

“The war didn’t stop, I just changed my toolset,” Parker joked while sitting in his office with the lights off, classical music playing in the background. “I’m tenure track at Harvard, which is in many ways a more precarious position than being on the Pakistani border.”

A specialist in tissue engineering with an emphasis on designing heart tissue, Parker said he hopes to use his expertise to find ways to save soldiers suffering from severe brain trauma.

When an IED explodes next to an armored vehicle in Iraq or Afghanistan, the shock from the blast can cause severe brain injuries to soldiers in the immediate vicinity, even if they are in armored vehicles.

Parker said that as an outsider to the field of brain trauma, he may be able to bring new insights to the treatment of severe brain injuries.

He has won a one year grant from the Department of Defense, and is working with some students in his lab to simulate, through cells in a Petri dish, the traumatic cell damage caused by a nearby explosion.

Parker’s research is complimented by the work being conducted by his colleagues on the third floor of Pierce Hall.

Bioengineering professor David J. Mooney, also working with a grant from the Defense Department, is studying the signaling processes that determine how stem cells differentiate to become different types of tissues.

This project uses microfluidic systems and also involves “an exploration of the space between stem cells and nanostructures.”

While emphasizing that the results of his lab’s work could not be turned into practical treatments “for many years hence,” Mooney acknowledged that his findings could have a wide range of applications.

“This research may yield basic insight into how to create replacement organs, or even a new approach at replacing a soldier’s [blood cell producing] system” he said, adding that such technology would have broad implications not limited to treating war wounds.

Down the hall from Mooney and Parker, another researcher, Debra T. Auguste, is testing new methods of drug delivery that could slow internal bleeding and give soldiers a better chance at survival if they are injured far from a hospital.

“When people leave the base and go out into the field, there is limited medical care,” Auguste said. “So the idea is to...change the way we think about medical care.”

Most battlefield casualties come from hemorrhagic shock—or “bleeding out”—caused by a bomb blast or a gunshot wound. If the bleeding occurs in an area where a tourniquet cannot provide adequate constriction, rapid blood loss can occur.

Auguste’s lab had always focused on developing drug-delivery mechanisms that target specifics sites in the body, and a grant from the Navy has provided her with the opportunity to tailor this research towards site-specific vasoconstriction.

‘OUT IN THE WOODS’

Though his research is sponsored by the Defense Department and is intimately related to war, Parker said that it doesn’t carry a stigma because it is about finding medical treatments for wounded soldiers.

“You’d have to live in a cave out in the woods to separate yourself from what military-driven technological innovation has provided this country,” Parker says. “If you take a look at the cutting edge of science in any particular field, you’ll find DOD-sponsored research projects there.”

Dubbing his current research “emergency science,” Parker said the urgency of this work, and the Defense Department’s “commitment to innovation even at the risk of failure,” are akin to the coordinated scientific effort that led to the development of the atomic bomb.

Like Parker, Auguste said that doing research that may have military implications arouses very little debate—especially compared to the embryonic stem cell work that comprises a significant portion of her lab’s activities.

Mooney said that the bio-centric nature of Harvard’s research insulates the University to an extent because its scientists are more concerned with making medical advances than designing defense systems.

“If you look at other universities you might find things that could be much more tied to weapons programs, but at Harvard, it’s safe to say there’s a definite focus on biomedical engineering,” he said. “If you were at MIT, you’d have a very different story.