Overtime Heartbreak in Final Leg of Road Trip for Crimson 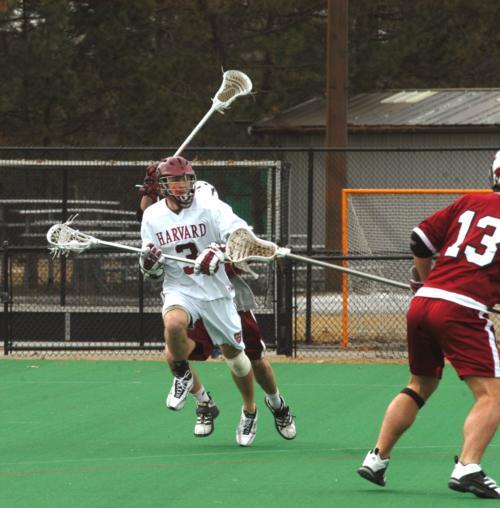 Senior midfielder Zach Widbin, shown here in earlier action, ran the offensive attack for the Crimson against Denver, scoring a career-high four goals in the losing effort. Two of his goals gave Harvard a 6-3 edge at halftime, while his other two gave his By Jessica S. Lin
By Malcom A. Glenn, Crimson Staff Writer

DENVER—Maybe it was the altitude. Or perhaps it was history, a history that motivated Denver to exorcize the demons of the past two years, when the Harvard men’s lacrosse team recorded twin upsets of the Pioneers.

Or maybe it was a second-half Crimson letdown and a late Denver surge that propelled the Pioneers (6-4) past Harvard in a 10-9 overtime win on Saturday afternoon in front of 1,480 fans at Peter Barton Lacrosse Stadium in Denver, Colo.

It was the third straight loss for the Crimson (4-4) and the final contest in a three-game road swing that sent Harvard all across the country during spring break.

Fatigue didn’t seem to be an issue for most of the contest, as a four-goal second-quarter output had Harvard up 6-3 at halftime. The Crimson led for the bulk of the second half, too, until Denver tied the game at 8-8 with 5:49 to play in regulation.

But just over a minute later, junior midfielder Max Motschwiller emerged from a scrum in front of the Pioneer net and flipped a goal past Denver netminder Austin Konkel to give Harvard a 9-8 lead with less than five minutes to go.

The Pioneers couldn’t muster a goal on their next possession, as junior goalie Joe Pike made one of his career-high 17 saves for the Crimson. Two Harvard turnovers and another Pike save later, however, and Denver silenced the small Crimson contingent in attendance with an equalizer with just over a minute to play.

“I think we played too much defense,” Harvard coach John Tillman said of his team’s second-half effort. Pike faced 24 shots after the intermission compared with just 17 in the first 30 minutes.

“That’s a very dangerous offensive team, and we just kept giving them too many opportunities,” Tillman said.

The last opportunity came in overtime, when the Crimson held the ball for the opening two minutes of the extra period but produced just one shot. When the Pioneers caused a turnover midway through the extra frame, it took Denver only a minute to notch the game-winner, when Cliff Smith’s perimeter shot found the back of the net, sending the Pioneer bench onto the field in a frenzied celebration.

“All that matters is the wins and losses right now, and we needed one pretty bad and we didn’t get it, so that was tough to swallow,” Motschwiller said.

In addition to Pike’s career performance in the losing effort, Harvard also got a career-high four goals from midfielder Zach Widbin. The senior scored three of the Crimson’s four goals spanning the second and third quarters.

“He had a couple of pipes in the last few games and couldn’t get one to fall, and you knew that once he got it going, he’d start picking it up,” Motschwiller said of Widbin. “It’s good to have him going because that’s going to be important for the rest of the year.”

Widbin’s fourth goal of the game made the score 8-6 just 12 seconds before the end of the third quarter, temporarily halting a Denver run.

The two teams played to a draw in the first quarter, ending the opening period even at two goals apiece. The Pioneers took a 3-2 lead early in the second quarter, but Harvard reeled off four straight scores to take the halftime advantage. Sophomore Jason Duboe had back-to-back goals for the Crimson, while junior midfielder Nick Smith and sophomore midfielder Travis Burr each scored once.

The road has been unfriendly to Harvard, as all four of the team’s losses have come away from Cambridge. The Crimson will have to get used to it, however, as the squad has only two more games on campus in addition to a ‘home’ game at Gillette Stadium in Foxboro, Mass. this weekend against Cornell. Last week was the first of two three-game road swings for Harvard this season.

“We weren’t going to allow that to be an excuse,” Tillman said. “Life is tough, and you have to be able to overcome obstacles and challenges.”

Denver now has a 3-2 lead in the all-time series against the Crimson. Tillman said he wasn’t too excited about the prospect of traveling out west again next spring.

“We probably won’t be here next year,” he said.