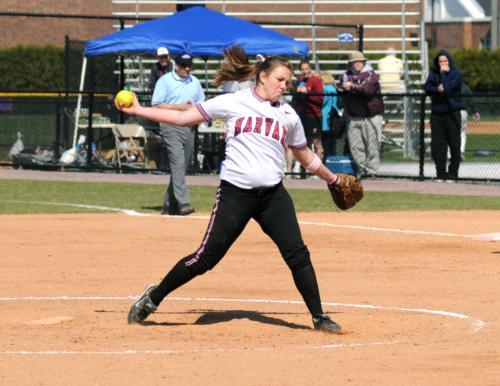 Sophomore Dana Roberts and senior Amanda Watkins combined for a three-hit shutout win in game two against Brown yesterday. The win clinched the team’s second consecutive Ivy League North Divison title and came on the heels of the Crimson’s 7-6 loss to the
By Kara T. Kelley, Crimson Staff Writer

In its second four-game Ivy series, Harvard softball was two outs shy of sweeping Brown this weekend at Soldiers Field. Victorious in three out of four contests, the Crimson (21-18, 12-4 Ivy) outscored the Bears (7-23, 2-14 Ivy) 25-7 on the weekend.

After taking two on Saturday, Sunday’s victory clinched the Ivy League North Division championship for the second straight year. Harvard came back from an extra-innings loss in Sunday’s first game to claim the second.

“After we lost the first game, it was a wake-up call to say ‘how badly do we want this’?,” captain Shelly Madick said. “I think we all set out to win and our mission was refreshed.”

While the clinching game, and all the games in the series, saw contributions from the entire Crimson squad, the freshmen brought a lot to the team’s offense.

“[Bowers] had some key pinch hits,” Harvard coach Jenny Allard said. “She had some key, RBI-producing at bats. [Henderson] and [Macadam] are so quick on the bases. They’re a good 1-2 punch in the top of the lineup.”

“We knew the freshmen coming in were going to be a really strong class for us, and they proved us right,” Madick said. “We lost a lot of really talented seniors last year and a lot of us were questioning how we can fill the void that class has left, and the freshmen have done just that. It’s been great to see.”

In the fourth game and third shutout win of the series, Harvard clinched the Ivy League North Division title.

“Amanda had a great performance today,” Madick said. “She really stepped up when we needed that last win to clinch and it was great that she was able to do that for us.”

In relief, sophomore Dana Roberts kept it scoreless for the final three frames, surrendering a single hit and striking out three.

In the third inning, the Crimson turned a one-run game into the 6-0 lead it held through the end of the contest. Back-to-back singles by freshmen Emily Henderson and Ellen Macadam came around to score when sophomore Jessica Pledger singled to short. Sophomore Melissa Schellberg knocked in the third run of the inning and freshman pinch hitter Caitlin Bowers doubled down the left field line to score the final two.

With a comfortable lead going into what would have been the final frame, the Crimson gave up four runs, tying the score at six.

The Bears began the seventh inning rally with a one-out infield hit followed by a walk and a single to right to drive in one. The following three runs came after a walk loaded the bases and a hard ground ball up the middle scored two. The third tally came on an error in center field to knot the score.

The Crimson had two chances to score, but did not manage to reach base in six at- bats.

Brown’s go-ahead run came in extra innings, when a single advanced on a sacrifice bunt and came around on a hit to center in the top of the eighth.

“We lost the game. We beat ourselves,” Allard said. “We made key defensive mistakes that hurt us…Offensively, we scored enough runs to win. We could have put it away sooner. We had other opportunities with runners in scoring position.”

Madick threw for 7.2 innings, striking out the side in the fifth and sitting down eight in total. Brown produced seven hits and plated seven runs, two of which were unearned.

The Crimson’s runs came off a first-inning inside-the-park homerun by Henderson, a double by Francis and a Schellberg single. Bowers pinch hit in the fourth, sending a two-run longball over the fence. Francis followed suit with a fifth-inning solo shot.

With the game scoreless into the fifth inning, Bowers, pinch hitting for Henderson, put Harvard on the board with a single to right to knock in senior Danielle Kerper. Kerper led off the inning with a double to left and advanced to third on a sacrifice bunt by junior Bailey Vertovez.

The second run came from a solo homerun to center by sophomore Lauren Murphy. Murphy launched the longball on the first pitch of her at bat to mark her seventh of the season.

In the second inning of a five frame game, the Crimson batted around and rallied seven runs. Murphy started it off with a single through the left side. She later came around to score on an error which placed Kerper at first. Vertovez singled and another error allowed Kerper to score. Pinch hitting, Bowers drove in two on a single to the right side. Singles by junior catcher Hayley Bock and Schellberg and doubles by sophomore Jennifer Francis and Murphy added to the seven-hit, seven-run effort.

With a total of four Brown errors, Harvard capitalized on the Bears’ mistakes.

Sophomore Stephanie Krysiak tripled in the third and later scored on a throwing error to put the Crimson further ahead. After a pitching change, Macadam launched an RBI double down the left field line. With one on and two out, Francis knocked one out of the park, adding another two runs.

Harvard’s final at bat in the fourth inning saw another two runs off a two-out double by Macadam.

After clinching the title, the Crimson has six games left to play before the Ivy Championship Series—a double-header against Boston University and another four game series against Dartmouth next weekend.

“It was great,” Allard said. “It was great to put ourselves in that position this weekend. Heading into the last weekend, not having to play ‘with that pressure’. We also have to find motivation in the last series against Dartmouth, too.”