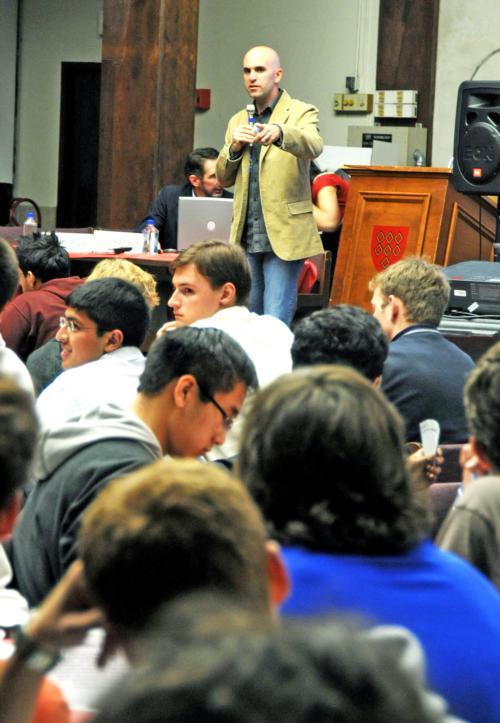 Making a couple hundred thousand dollars profit in a weekend, sipping Dom Pérignon champagne, and sitting ringside at a Mike Tyson fight may sound like a dream to most college students. But to blackjack gurus David Irvine and William B. Kaplan ’77, it was just a job.

Irvine and Kaplan talked about their business ventures with blackjack and even explained the basics of their card counting strategy as part of the Harvard Undergraduate Women in Business’s (WIB) “Risky Business” event in Quincy dining hall last night.

The dining hall was packed with slightly more women than men for the event, and students munched snacks or read fliers about Irvine and Kaplan as the audience filed in. To open the night, WIB played a clip from HBO’s Real Sports series showing Irvine plying his craft. When it finished, Irvine took the stage and began recounting his career in the business of gambling.

Irvine, an MIT graduate who later earned a masters degree from Cornell and an MBA from Purdue, told how Edward Thorp’s book, “Beat the Dealer,” started the card-counting movement back in the 1970s, about the $55,000 he won at Trump Plaza in Las Vegas the first weekend he played with the MIT blackjack team in 1993, and about the luxurious perks of playing big in Nevada.

To give a sense of the magnitude of these perks, Irvine told a story about one of his fellow blackjack players receiving a private plane-ride to the Superbowl and watching it from the 50 yard line.

Irving emphasized that, despite all the excitement and glamour, blackjack was essentially a means to an end.

“We were out there to make money,” Irvine said. “It was definitely a business for us.”

According to Irvine, “all you need to count cards is...grade-school math.” As attendees followed along in their own decks, he explained the counting process.

Cards numbered two through six are “plus one”; seven through nine are “neutral”; and ten through ace are “minus one.” Adding the value of the cards being played gives the “count” of the decks, and the higher the count, the better the chance of winning in a game of blackjack. Using this basic strategy, and disguising himself with pseudonyms such as Vincent Vega (a character from Pulp Fiction), Irvine helped his team earn up to $500,000 in a single weekend.

Taking the stage after Irvine, Kaplan gave the details of his blackjack experience. Talking strictly about numbers, he broke down his early career into statistics.

His MIT blackjack team set out with $89,000 and doubled their money in 10 weeks, he said, averaging $170 in profit an hour. There were some troubles, Kaplan admitted, such as the time a team member left a bag of $125,000 in an MIT classroom after blackjack practice and only recovered it weeks later.

After the event ended, students practiced counting their own decks of cards and talked about their tactics.

“After seeing this presentation, I’ve definitely been inspired to try my hand at counting cards,” Kelly M. Conley ’11 said.