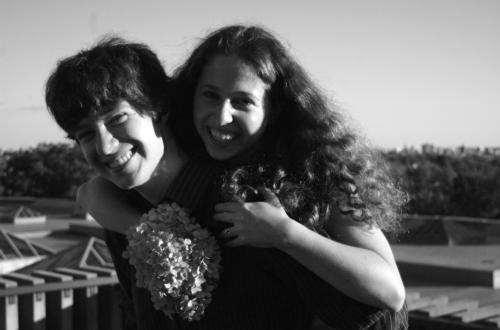 Four and a half years ago, while the two were high school seniors, Hansford and Godina met up on Flagstaff Mountain, just west of their hometown of Boulder, Colo. He asked her out, and they began a relationship that lasted through their respective careers at Tufts University and Harvard.

But Hansford wasn’t done with that mountain just yet.

Last June, Hansford asked Godina to join him for an early-morning trip to Flagstaff. “It was not like Eric to get up at 5 a.m. and drive up there, so I knew something was up, and I was a bit nervous,” Godina said. Sure enough, when they arrived to see the sunrise, he popped the question.

Though nervous, Godina felt obliged to give an immediate answer. “When he first asked me out, I said, ‘Maybe.’ So he warned me that when he would propose, I would have to say yes,” she said with a laugh. They soon set a date for Aug. 2 of this year.

And where will the wedding be held? “It’s going to be on that same mountain,” Godina said with pride.

Careful coordination kept this couple together through college. “I got into Harvard early, and then Eric happened to pick a Boston school,” Godina said, drenching the word “happened” with sarcasm. “The official story was it was separate, but me being in Boston was definitely an influence” on his college decision, she said.

Subsequently, they have synched up study-abroad stints in New Zealand and have “molded each other” in terms of their academic interests, Godina said. They even chose to go to the same law school—Stanford—next year.

In a way, coordination even seems to be a factor in their decision to wed at this age.

“It seemed like a very crazy thought, because we’re so young,” Godina said of their engagement. “But this is a good time, since we’re going to law school and this is our last free summer.” The timing presents a very sensible schedule: “We get to get married, tie up loose ends, and go straight into law school,” Godina said.

Of course, efficiency is only one reason for the wedding. “We always knew we’d get married,” she said. “We just get along really well.”

Godina is also ready to dispel any misconceptions about the ruggedness of the mountain ceremony.

“I think, in Colorado, it’s not that uncommon to get married on a mountain,” Godina said. “It’s pretty civilized. There’s a fancy restaurant on that mountain. No one will have to hike up.”