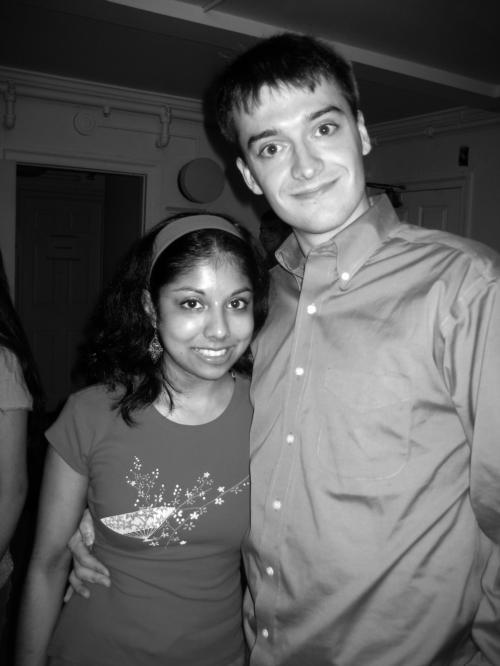 For those who lurk on Facebook hoping for romance, the tale of Nicole Ali ’08 and James M. McNeer ’07 must look like a dream come true. The ubiquitous social networking site that brought them together has led to a wedding of international proportions.

“It was the summer before my freshman year,” Ali recalled. Unexpectedly, she received a Facebook message from McNeer, a rising sophomore. “He was looking for people who play computer games,” she said. He had seen her Facebook profile, where she proclaimed a love of gaming, and he wanted to make a connection. An electronic friendship blossomed.

But before sharing meals, holding hands, or even meeting, they waged war against each other.

“During freshman week, we played a computer game against each other before we met,” Ali said. The game was “Starcraft,” and that first cyber-date was short-lived. “He beat me in about a minute or a minute and a half,” she said with a laugh.

Soon after, they met in person. Within weeks, they were dating. The relationship has gone “uninterrupted” since then, according to Ali. Marriage began to seem like a good idea: “We like having one person to come back to, and we spend way too much time together,” Ali said. McNeer, who now lives and works in Connecticut, proposed earlier this year. Ali is beginning an M.D./Ph.D. program at Yale next year, and they plan to live together soon. She described their four years together as “pretty basic.”

However, their impending wedding, scheduled for July 2009 in Ali’s native Minnesota, will be anything but basic.

“It’s been an interesting process to figure out how we’re going to do things,” Ali said of the nuptials. A second-generation Bangladeshi Muslim, she will be stirring her religious and cultural heritage into a marital melting pot with McNeer’s Massachusetts Protestant background.

For example, McNeer’s childhood pastor will be presiding over the wedding, but the day before, there will be a traditional Bengali “gaye holud” ceremony. “I’ll be in bright colors, he’ll be in some crazy Bengali outfit…and each family member will put turmeric on me,” Ali said of the event.

The clothing will also represent a fusion of West and East. “My mom bought my wedding dress, which is a Bengali style lehenga, but it’s a white-colored dress instead of the traditional red and gold,” Ali said. “On the wedding day, it’ll be a tux for him. My bridesmaids will be in some kind of lehenga, and his side will be in tuxes.”

It should be a sight to behold—and a lot of people will be beholding it.

“My mom has invited 120 families, which is around 250 people,” Ali said with a slight groan. “And that’s just for the engagement party.”