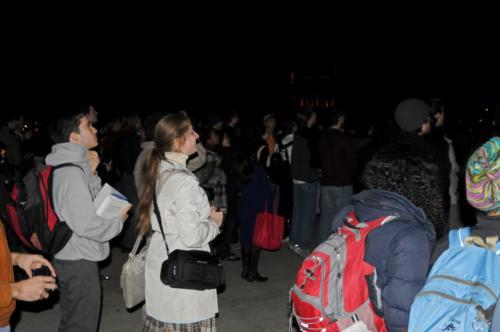 Student Astronomers at Harvard-Radcliffe (STAHR) are joined by other enthusiasts atop the Science Center Observatory Sunday night to watch the launch of Space Shuttle Discovery.
By Kristi J. bradford, Contributing Writer

Nearly 100 students gathered atop the Science Center last night to witness the Space Shuttle Discovery flicker across the skies of Cambridge after its launch from NASA’s John F. Kennedy Space Center.

The shuttle took off from Cape Canaveral, Fla., at 7:43 p.m., and a mere six minutes later it emerged from the South-Southeast area of the sky and traveled to the East-Northeast part of the sky.

Students made their way up to the tenth floor of the Science Center for the chance to catch a glimpse of the spacecraft, which appeared as a fast moving, relatively bright, star-like object.

“I had never seen a shuttle launch before and thought it would be an interesting sight,” said Levi H. Dudte ’11, one of many spectators.

For another observer the spectacle reflected her future aspirations.

“I have always wanted to be an astronaut and thought it would be cool to see a rocket launch,” said Diana Suen ’11, another onlooker.

According to Daniel A. Handlin ’11, a STAHR member, shuttle launches are only visible from Cambridge once or twice a year.

“You can only see a shuttle launch one minute a year and this was that minute,” Handlin said.

Although there are several shuttle launches a year, they can only be seen when they occur at night.

According to Herring, the launch time is chosen in order to optimize the use of propellant for the shuttle’s trip to the International Space Station (ISS).

The shuttle mission STS-119 will last 13 days and will bring the last US-designed component to the ISS.

The mission was originally supposed to launch in mid-February, but was delayed because of problems with the shuttle’s flow valves.

The launch was again delayed from March 11 to yesterday because of a leak in a vent line.

The final component of the ISS will be delivered at the end of 2010 on the space shuttle’s final mission before its expected retirement, according to Herring.