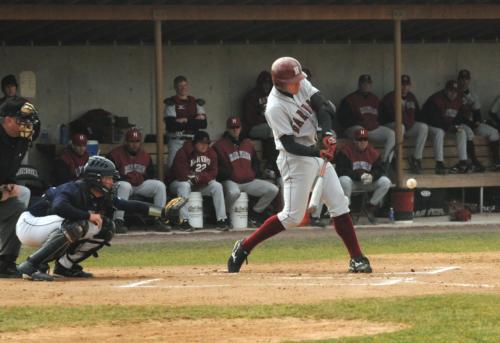 Senior outfielder Tom Stack-Babich should be back at full strength and provide a consistent threat at the middle of the lineup.
By Emily W. Cunningham, Crimson Staff Writer

Tom Stack-Babich doesn’t look like he’d be into yoga.

The batter’s box, not the exercise mat, has been the most comfortable home to Harvard’s 6’3, 210-pound right fielder. But as he worked on staying in shape during his offseason rehabilitation from two 2008 injuries, yoga it would be.

“I actually liked it,” Stack-Babich admits. “I’m not the most likely yoga participant. I was probably the only guy there.”

The yoga experiment may have been Stack-Babich’s most unorthodox strategy in his lengthy rehabilitation from the wrist injury he suffered while stealing a base during the Crimson’s 13-2 loss to Lafayette last March 16. Trying to play through the pain didn’t work, and the cortisone shots Stack-Babich took during the team’s week of games in California didn’t do the trick. The slugger’s season was over, and his long road to recovery was just beginning.

The first step on that road—and perhaps the most painful—was sitting on the bench while his teammates stumbled to a 10-30 overall record, including an 8-12 mark in Ivy play.

“We just kind of got used to losing,” Stack-Babich says of the squad that started the 2008 campaign 1-22. “We couldn’t do the little things. We’ve just got to be good at winning.”

Here’s the kind of season Stack-Babich was putting together before that fateful slide into second base (for the record, he was safe): in 15 games, he amassed a .375 average, 31 total bases, and a .648 slugging percentage after eight of his 18 hits went for extra bases. In one four-game stretch in March, he had 12 hits in 16 plate appearances.

These numbers, when combined with a healthy 2007 campaign that saw him hit .313 and earn an Ivy League Honorable Mention, earned Stack-Babich an invite to the Cape Cod Baseball League, a collegiate summer league that doubles as a breeding ground for future professional players. For the South Shore native, who led Xaverian Brothers High School to a state title in 2004, what began as simply a more pleasant step along the road to recovery quickly became a dream come true—a dream complete with major league scouts checking out prospective draft picks and youngsters asking for autographs. Life was good.

But just as Stack-Babich was beginning to hit his stride on the Cape, another injury forced him to take a big step back. This time—warning: not for the faint of heart—his left thumb folded all the way back during a diving play in the outfield.

“In practice, I’m a little more conscious about my body and throwing it around,” Stack-Babich admits. “But I’m sure I’ll be diving and sliding like usual once the first game starts.”

These assurances aside, Stack-Babich is letting his preseason workouts do most of the talking—and those watching have gotten the message.

“He’s a guy I’d like to be a little more like, in the sense that, man, can he drive the ball,” junior slugger Andrew Prince says. “When he’s going well in batting practice, he always starts off hitting the ball solid the other way, just hitting these screaming line drives. He’s a guy that can just be dangerous as hell.”

Returning for a fifth season of athletic eligibility meant that Stack-Babich had to spend the fall away from Harvard and his teammates. After spending that time working at a hedge fund, cooking his own meals, and trying out that whole yoga thing, he’s happy to be swinging the bat again—something he didn’t do for the first time in rehabilitation until late October. What’s more, he’s making up for time lost with his new teammates by becoming a mentor to Harvard’s up-and-comers.

“[Freshman] Marcus Way was having some trouble with his swing, and Stack just helped him out a little bit,” rookie J.T. Tomes says. “You ask him a question, and he’ll always answer it and help you be a better player.”

As the Crimson’s season begins today at Jacksonville State, Harvard will officially put last season’s disaster in the past. The return of a talented sophomore class, which features several 2008 regulars, means another year of experience for a revamped Crimson squad. A promising group of freshmen will fill a few of the gaping holes left by the class of 2008, the biggest of which depleted coach Joe Walsh’s starting rotation. The 2009 opening day lineup looks a lot different from last year’s, but the two have one thing in common: Stack-Babich in the middle of the order, just where his coach likes him.

While he admits he doesn’t have a clear backup plan if professional ball doesn’t pan out, the senior is confident, but not cocky, about his prospects for June’s Major League Baseball draft.

“I think I deserve to get drafted, even though things have been up and down for me,” Stack-Babich says. “Of course I don’t expect to be a high pick, but I don’t care about that. I just want to keep playing baseball.”

Stack-Babich has been in touch with a handful of teams, starting during his Cape League stint and continuing throughout the offseason. They’ll be there this weekend at Jacksonville State, checking out Gamecocks ace and likely first-round pick Ben Tootle.

But expect them to take a look, too, at the Crimson’s imposing right fielder. If they do, they’ll see the end of one journey—Stack-Babich’s long road back from injury. And if all goes according to plan, they’ll see the beginning of another—his trip back to his place among the league’s most dangerous sluggers.

—Staff writer Emily W. Cunningham can be reached at ecunning@fas.harvard.edu.