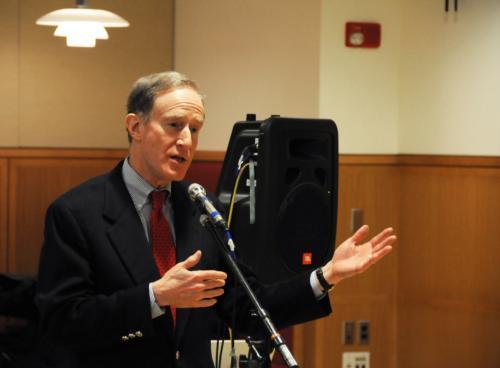 Professor Benjamin M. Friedman ’66 discusses the economic crisis and its implications for democracy at the Harvard International Review’s launch party for its new issue.
By Spencer H. Hardwick, Contributing Writer

The dire backdrop of the economic crisis may not seem like the most celebratory theme to use for a self-titled ‘launch party,’ but the Harvard International Review did just that when it released its Winter 2009 issue last night at a soiree in CGIS cafe.

Approximately 40 students gathered for the event, which doubled as a symposium, featuring economics professor Benjamin M. Friedman ’66 as the keynote speaker.

“The current economic downturn is extremely threatening,” Friedman said during his speech. “People should be aware that the problems we’re discussing are far more important and lasting than just here in the United States.”

“I thought his idea of looking at economics through moral consequences would appeal to a lot of students” said Gabrielle M. Domb ’11, who helped coordinate the launch party.

The international publication’s Winter 2009 issue, titled “Rethinking Finance Beyond the Crisis,” aimed to answer a series of looming questions about the sagging global economy through articles by distinguished academics.

One of the review’s editors, Owen C. Barron ’10, said that the new issue’s overarching goal was to show how the economic crisis extends beyond the borders of the United States.

“These articles are just one step forward in reforming the system,” Owen added.

The review’s second launch party of the year, the event was designed to promote the publication within the Harvard community. While the HIR is distributed worldwide, the review has a relatively low profile on campus, said Barron.

“We’re really trying to increase our presence on Harvard’s campus,” he said. “It’s a great way to have connections between professors and students on topics of international interests.”

The publication has already begun making plans for its spring issue and symposium which will focus on the “Future of War.”